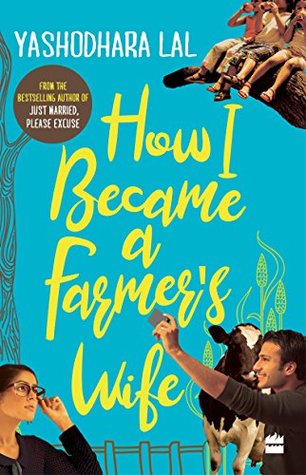 In an age when early retirement and adopting the rustic life are an alternative reality for several rat-race weary professionals, Yashodhara Lal’s “How I Became a Farmer’s Wife” fits the up-and-coming alternative cliche like a glove.

It tells a story similar to some off-beat, but growing-in-number real-life tales of techies and MBAs quitting their high-paying jobs, which involved firing away at keyboards, and choosing to soil their hands growing celery or chasing other agricultural or alternative pursuits.

The book tracks the journey of a quintessential urban couple in Gurugram, right from the time when Vijay, the husband and father, first tinkers with the idea of investing in farm land, after glancing through the classified section of a newspaper, to the family eventually living the dream together, with their children.

The extent of transition — from urban to rural — which is about to hit the lives of the family is best explained in a sentence with a comic turn early on in the book’s prologue, when the couple first exchange notes about the shift.

“He (Vijay) kept talking about vanilla, amla and something that sounded like Jethro Tull but turned out to be jatropa (an oil rich plant which is fuel for biodiesel).”

The narrative is more or less about how the couple and their children deal with the change in their lives and the geography around them over the years and their adjustment — yes, with its trials and tribulations — to their new life in rural India.

For author Yashodhara Lal, the book is also a memoir of sorts, chronicling her own experiences with juggling different slices of life with her three children, her career — all playing out in urbanscape comforts — and to then having to deal with a different set of problems which includes lack of air conditioning, dealing with crop rotation battles, weather vagaries and, of course, the mooing of cows in the dairy which Vijay ends up starting.

The book captures the transition of the couple’s lives from Gurugram to rural India in earnest, subtly underlining the sets of issues faced by people, especially farmers, living in the less privileged parts of an India that is divorced from urban comforts.

The story also dovetails the quirkiness and “randomness” of Vijay’s passion with the commitment of Yashodhara as a partner, who willingly sacrifices her corporate career to help him fulfill his dream.

“How I Became a Farmer’s Wife” is an urban tale with a moral which takes you away from the seducing glitter that city dwellers are used to, to the coarse pleasures of rural life and the struggle the transition entails. But it also underlines the fact that no journey is daunting if those who love you and you really care for, come together to face challenges as one unit. (IANS)