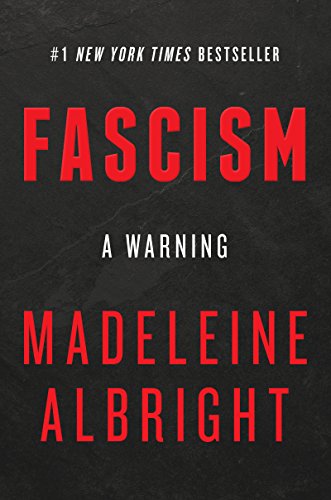 If not the outcome of the Second World War, the Berlin Wall’s fall seemed to pave the way for democracy’s triumph — but nearly three decades later, we may be forced to rethink this comforting thought. The recent growth of authoritarianism, emphasising “tradition” and conformity and villifying globalisation, immigration and dissent are pointers that fascism is certainly not in the “dustbin of history”. 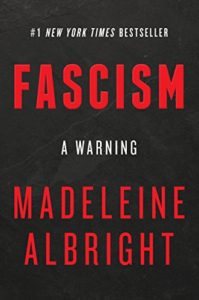 We have long thought that it was the 20th century which saw the global clash between democracy and fascism, where the latter was defeated. But, as we find in this book, this defeat was far from conclusive and fascism never ever really went away — and certainly not far enough.

Fascism existed even in the traditional homelands of democracy, where it still could come out most unexpectedly — as the Brexit vote and the election of Donald Trump shows, contends former US Secretary of State Madeleine Albright in this book.

Asking why democracy “is under assault and in retreat” (as per Freedom House), why so many people in power are “seeking to undermine public confidence in elections, the courts, the media, and — on the fundamental question of earth’s future — science”, why differences are widening and, ultimately, why we are once again talking about Fascism, she gives an unequivocal answer — the current US President.

“One reason, frankly, is Donald Trump. If we think of fascism as a wound from the past that had almost healed, putting Trump in the White House was like ripping off the bandage and picking at the scab,” says the first woman to be Secretary of State — and then seeks to make her case.

But this is far from just another anti-Trump rant, no matter how elegantly phrased, and not only focussed on him.

For in this a timely, informative and frankly worrying account and analysis, Albright travels from the original fascist, Benito Mussolini and his Nazi contemporary Adolf Hitler to Slobodan Milosevic’s Serbia; from the “Hermit Kingdom” of North Korea under the Kims and Hugo Chavez’s Venezuela, and from Russia in its Soviet phase under Stalin (and now under Vladimir Putin) to Recep Tayyep Erdogan’s Turkey and Viktor Orban’s Hungary.

However, she does not term all of these as fascist, but instead shows how some of their actions tend towards fascism and which ones may be misguided or wrong but aren’t fascist.

And Albright, who had suffered under fascism twice — with one version engulfing her homeland and a large part of her family, and then another from the opposite direction made them refugees again — also seeks to analyse fascism’s pathology, why we fail to recognise it, or most importantly, why a lot of us are persuaded by it.

Answering the second question first, she contends nothing beats fascism as the ultimate political pejorative — used for any corporate bigwig by a leftist, for Barack Obama by those of the far-right, for strict parents by any rebellious teen, as well as for teachers, feminists, chauvinists, yoga instructors, police, dieters and many more.

However all this overuse is “draining potency from what should be a powerful term”, and hence blinding us to its ominous presence, she says.

Albright then goes on to identify what fascism is really and how to recognise its adherents. She delineates the tactics of its leadership, which span drawing on resentments to the desire to be part of a bigger, powerful whole, and how they consolidate power, chiefly by seeking to control information, to arrive at a definition of fascism and tracing its origins in the modern, industrialised world.

Along with the case studies mentioned above, including her own interactions with most of the contemporary figures listed here, she goes on to present an alarming set of futures for the US under Trump (and beyond), why people get disenchanted with democracy, the less than salutary role of social media and big business to make some incisive points about fascism and how we can — and should — tackle it.

Albright says no country or society, no matter how much it prides itself on its democratic traditions, can remain immune, given the changing political and economic dynamics.

We can only be prepared to recognise the warning signs and this shows how. (IANS)