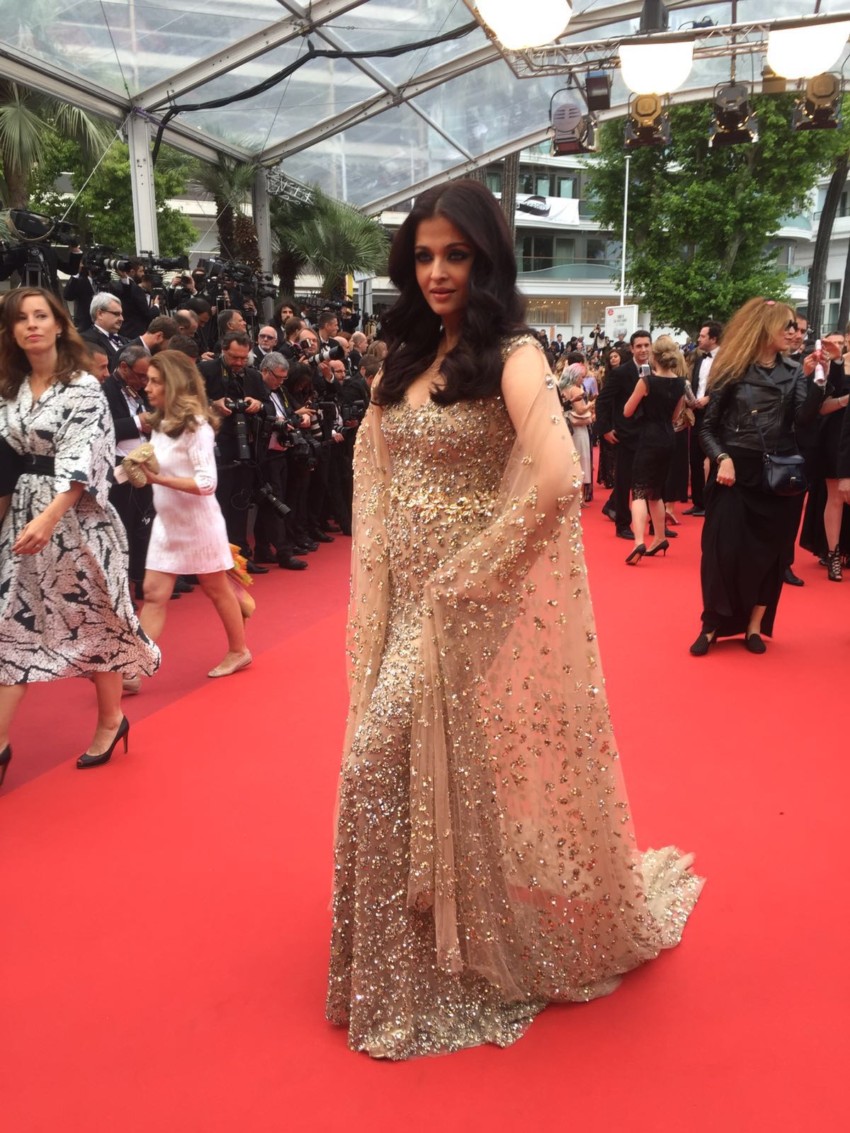 Mumbai– Come May and Bollywood actresses Aishwarya Rai Bachchan, Sonam Kapoor and Deepika Padukone will be heading to Cannes to add glamour at the red carpet of the prestigious Cannes Film Festival.

The 71st Cannes Film Festival will be held from May 8-19. The actresses will be walking at the red carpet as L’oreal Paris brand ambassadors.

Deepika will be walking the red carpet for the second time on May 10 and May 11. Aishwarya will be completing 17 years at the red carpet and will be attending the festival on May 12 and May 13.

Sonam will be completing eight years at Cannes and will attend the festival on May 14 and May 15. Some of the other L’Oréal Paris spokespersons that will be seen on the red carpet include Julianne Moore, Helen Mirren and Doutzen Kroes.

The cosmetic brand is celebrating 21 years as the official make-up partner for the Festival de Cannes. The theme this year is #Summer Escape.

Inspired by the French Riviera, glitz, allure and colours of Cannes, the #SummerEscape collection includes a range of long wear and all-day comfort make-up.

Raagjeet Garg, General Manager, L’Oréal Paris, said: “We are excited to introduce our long-wear make-up range which has been designed to suit Indian skin tones in shades of summer. Our make-up experts have created signature looks that the ambassadors are going to wear on the red carpet, showcasing the perfect, glowing sun-kissed look.”

Mumbai– Actress Richa Chadha has wrapped up shooting for “Abhi Toh Party Shuru Hui Hai”, which she describes as a “fantastic film”.

“I am extremely happy that I got to be a part of this fantastic film. I have had the rare opportunity of working with some of the best actors in the country at present who are alive. They are so accomplished. So many of them have already won national and international awards,” Richa said in a statement.

Richa was shooting for the political satire, directed by Anubhav Sinha, in Lucknow. The actress hopes to collaborate with the director again.

“I just had so much fun on this. And I know for a fact that this will be a unique film that will be talked about for decades. The fact that the script is so good is why so many actors agreed to be a part of this. I have just loved every moment of my character and it gave me a rare opportunity to display my comedic side,” she added.

New Delhi– Singer Shilpa Rao, known for hits like “Bulleya”, “Tose naina” and “Manmarziyan”, is thankful to her father for believing in her talent and supporting her.

“I come from Jamshedpur where the focus is on academics. There are certain ways of falling into line like studying in missionary school and all. Music was not taken seriously,” Rao told IANS.

“The only person who did that for me was my father. He never saw it as a hobby. On the contrary, he saw it as something important. I understand that and resonate with now. But for him to have that foresight for me when I was a kid is a huge thing.”

The “Phir kya hai gham” singer added: “He never bothered what anybody was saying in terms of what I do. He also brought me up in the same manner.”

The singer was on a North America tour earlier this month with composer Pritam.

Mumbai– Actor Anuj Sachdeva believes that two actors or people from any field can be friends as friendship has got nothing to do professions.

Anuj will soon be seen in “The Reunion…Jab They Met Again”, which is a 10-episode finite series from The Zoom Studios and will premiere on Zoom styled by Myntra on Saturday.

It is about a group of friends from Bourbon High’s class of 2008 who reunite after 10 years at a hill station where unresolved issues surface and play the party spoiler highlighting the fact that sometimes to look forward, it’s important to rewind and see how far you have come.

“I am friends with a few TV actors like Gaurav Khanna, Hussain, Smriti Kalra, Mohit Malhotra and Angad Hasija. We do hang out as and when we get some free time. Gaurav and I love to play PS4 together. Mohit and I like to go out partying once in a way,” he added.

On his ‘real’ life childhood friends, he said: “I have a few college friends from Delhi who I am still quite close to. But I guess I really share a strong bond with a couple of friends whom I met later on in life.”

How have his real life experiences enabled him to easily connect with his character in the show “The Reunion….Jab They Met Again”?

“I did take a few instances of my real life into the character, especially the part where my best friend keeps giving me lectures when I do something wrong and I keep telling her ‘lecture mat do’ (don’t lecture me).

“I actually used this line in the show. Other than that, the character was very fictional and not really something I would relate to or be in real life.”

Sanjeeda on why ‘no daily soaps with husband’

Mumbai– Actress Sanjeeda Sheikh has revealed why she will not do a TV show with her husband Aamir Ali, who is also an actor.

“Doing a daily show with Aamir will not make me miss Aamir. So no daily soaps with my husband,” Sanjeeda told IANS.

“Shooting for a daily show with Aamir will not make me look forward to anything new in the relation because we will be so used to each other… spending 12 to 14 hours in a day and there will be no excitement of seeing each other after a long hectic day,” she added.

But doing a music video with him is “a sheer pleasure” for her.

“The chemistry is effortless and it shows on screen,” she said about her chemistry with Aamir which the audience got to see in the dance-based reality show “Nach Baliye”.

Aamir and Sanjeeda have now teamed up for the music video of the new song “Ajnabee”, sung by Soham Naik. It is the sequel to “Bas ek baar”.

“Ajnabee” is a romantic song that narrates the story of a man’s longing for the love of his life to come back.

“When I first read the lyrics of ‘Ajnabee’, I was all pumped up to bring Anurag Saikia’s beautiful composition to life. I’m sure people will love this sequel even more,” said Soham.

The video is available on the Times Music YouTube channel.  (IANS)