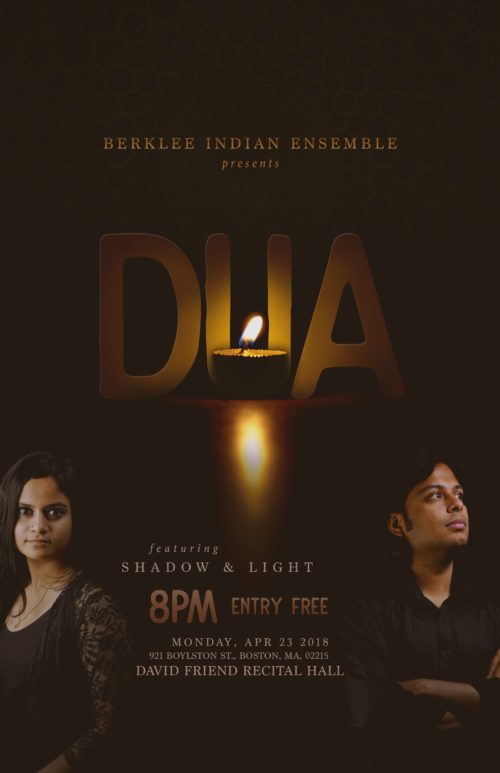 BOSTON–The Berklee Indian Ensemble will present their Spring showcase on Monday, April 23rd, featuring a special guest band, “Shadow and Light” from India and other musicians representing 11 countries. The event is free to all attendees.

Shadow and Light is a contemporary-classical project from India. This unique duo of Anindo Bose (piano, composition and production) and Pavithra Chari (vocals, composition and lyrics) write original music (in Hindi, English and Tamil) and have released two full length albums worldwide to critical acclaim. The band is releasing its third studio album in 2018.

“The concert will be performed by 37 Berklee musicians representing 11 countries, with a wide and varied repertoire ranging from folk, classical and semi classical, and contemporary Indian music with global influences of rock, funk, pop and jazz,” Berklee Indian Ensemble said in a statement.

Till date, their viral videos have garnered over 70 million YouTube hits, accounting for 51 percent of all of Berklee College’s total views, a record breaking feat, and the ensemble now has a touring faction to represent Indian music and Berklee around the world at music festivals and workshops. They recently released all 16 videos of their iconic concert with, and in tribute to, A.R. Rahman which can be viewed here.

With collaborations featuring A.R. Rahman, Shankar Mahadevan, Clinton Cerejo, Vijay Prakash and Shreya Ghoshal so far, it has become an axis point for Indian artists and students to share their music and experience the music of Berklee musicians hailing from more than 105 countries, and vice versa. In 2016, three young Indian musicians (one each from Assam, Uttarakhand and New Delhi) were granted Full 4-year scholarships to pursue a Bachelors Degree at Berklee. This is part of our mission to make music education more globally accessible.

In line with this same mission, in 2015, the Berklee Tandon Global Clinics were launched in India, offering the opportunity to experience Berklee-style classes closer to home. From how to be a better producer, to improvisation concepts; rhythm section roles in progressive rock to Ableton Live intensives, Berklee’s world-class clinicians offer tools and practical ways to help students get to the next level of their musicianship. These clinics, made possible by the generosity of Chandrika Tandon, (an avid supporter of music and education, Grammy-nominated artist, and member of Berklee’s President’s Advisory Council) help students gain awareness of their strengths and weaknesses, as well as provide tools to help them get to the next level of mastery in either their skill, approach, or mindset towards music. Berklee attempts to visit different cities in India each year, so as to provide quality education at reasonable prices at accessible locations.

They were chosen as first runners up among 200 bands of India by Sennheiser, and were also declared ‘Best Pop Act 2016’ by Radiocity Freedom Awards. They have received praise from Salim – Sulaiman, Shankar-Ehsaan-Loy, and Amit Trivedi. Shadow and Light went on their first international tour to Sri Lanka in 2016 and are releasing their third studio album in 2018.

They have had the opportunity to collaborate with renowned jazz guitarist Stanley Jordan, Brooklyn based multi-instrumentalist Karsh Kale, acclaimed playback singer Benny Dayal, and guitar virtuoso Warren Mendonsa for Nh7 Weekender and Red Bull Studio Science. They have also opened for the likes of Anoushka Shankar and Ranjit Barot and were most recently invited to perform their compositions at Serendipity Arts festival, Goa for a set curated by Ranjit Barot. They are currently working on an album in collaboration with Sarod players Amaan and Ayaan Ali Bangash.