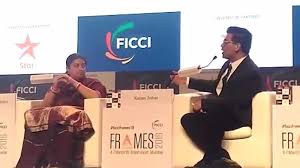 Mumbai– Information and Broadcasting Minister Smriti Irani said on Sunday the government is planning to set up a single-window clearance system for filmmakers to facilitate all types of clearances faster and under one roof.

In a conversation with filmmaker Karan Johar at the inaugural session of “Ficci Frames 2018”, Irani also sought to draw film fraternity’s attention to the need for personalising digital content for consumers.

Giving details of how a special team is working to this end, Irani said: “We have seen how National Film Development Corporation (NFDC) and Children’s Film Society of India (CSFI) work separately, which sends out a message to the world that it is a fragmented industry.

“So our government is aiming to bring all these departments under one umbrella so that a filmmaker with an idea does not have to run from one desk to another to get the support for executing a film.”

“We will ensure that the umbrella organisation is created by the industry representatives that we have invited, in the next two months,” she added.

Asked about her opinion on how exhibition in limited number of screens is affecting the box office collections, Irani said: “I think the answer lies in personalising content for viewers. But, it is not only about creating content but also distributing it.

“(The problem is) we look at distribution from the capacity of multiplexes, but if you look from the consumers’ point of view, it’s the…content that matters.”

Emphasising on the power of regional cinema, Irani said: “We don’t really talk about the capacity of our regional language films. How many countries can boast that I have a Marathi box office hit like ‘Sairat’ or Prosenjit doing films that cut across India or we have had a legend like Sridevi, who did films in five languages and was a superstar not only in Delhi, Mumbai but the entire nation. This is what we need to celebrate.”

“The more the expanse of content, the more the opportunities for local languages and local talent to come to the forefront. The beauty of our industry is that we are everywhere.”

The main event will start on Monday, March 5, and will continue till March 7, at Grand Hyatt here. (IANS)