If more than 40 percent of the actions we perform each day are not actual decisions but our habits, then whether we lie, tell the truth, drink, smoke or cheat will also have to be part of our habits as well—at least 40 percent.

How are our habits formed? Remember how you hated drinking in the beginning. Then one day, you decided to try just one drink; a few months later tried two, then only at the parties, and then at home over the weekends and so on till it became a habit. I think same goes for lying or telling the truth.

For example, maybe you lied once innocently—just for a trivial thing; then the second time and the third time and then frequently without even thinking about it until lying became your habit—even when the truth was staring right in front of you in your eyes. The problem with lying is that for every lie to hide you will have to tell 10 additional lies. Once caught in this vicious cycle, you cannot come out of it, making not only your life but everyone’s life around you miserable.

The problem with liars, who are also master manipulators, becomes more compounded when liars are smart people. We all know that liars and manipulators eventually fail in anything they do. In the end, however, it is always the truth or righteousness that wins no matter how torturous the journey is . No exception. It has been proven time and again and not only in mythologies around the world, but also throughout the history.

One of the biggest tragedies in life is when intelligence and brilliance go wild and become destructive. India’s great legend Mahabharat, for example, makes this point beautifully. Its main character Shakuni undoubtedly is the greatest genius of his time. Of all Mahabharat characters, no one is as brilliant as he. No one understands human psyche as well as he does. No one is as dedicated and focused on his goal as Shakuni is.

In fact, Shakuni is so dedicated to his mission that he even gives up his kingdom of Gandhar and spends his entire life in Hastinapur in order to accomplish his goal. In addition, he has the backing and the machinery of the most powerful empire of his time behind him. Not surprisingly, he also succeeds in every move he makes—but only temporary and initially.

Towards the end, his victories over small battles don’t help him and eventually he losses the big war of his life. Why? The biggest flaws in his schemes and strategies were that he lacked truth and moral compass in every decision and strategy he made and executed.

Pandavas, on the other hand, had only two assets: truth and righteousness. They did things based on their moral compass. That is why they lost all little battles and often suffered setbacks, but won the big war at the end. 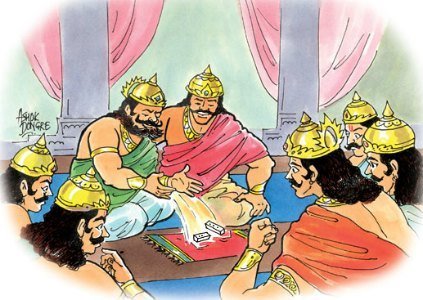 Another interesting observation is that Shakuni and his cronies (Kauravas) were always preoccupied, were never happy and their mind was always disturbed even when they were ruling Hastinapur and amassing wealth and power. Pandavas, on the other hand,  had always found humor in their life. They were happy and peaceful—even during their 13 years of exile and hardships.

Pandavas had made truth and righteousness their habit.

“The truth is something that burns. It burns off dead wood. And people don’t like having the dead wood burnt off often because they’re 95 percent dead wood,” says Canadian psychologist Jordan Peterson. “Believe me I’m not being snide about that. It’s no joke. When you start to realise how much of what you’ve constructed of yourself is based on deception and lies, that is a horrifying realisation. It can easily be 95 percent of you and the things you say and the things you act out.”

Peterson says that the truth is the solution to all problems. Tell the truth, or at least don’t lie, he adds.

If lies and its cousin manipulation become our habit, the hell will break lose—eventually. The truth, on the other hand, will establish us in peace, joy, righteousness and victory.

All mythologies and great philosophers have instilled the wisdom of truth. Remember the phrase satyam-eva jayate or “Truth alone triumphs.? This phrase is actually taken from the Mundaka Upanishad:

Through truth the divine path is spread out

by which the sages whose desires have been completely fulfilled,

reach to where is that supreme treasure of Truth.”

Just imagine the power of making truth your habit. In the “The Power of Habit” (Random House, 2012), author Charles Duhigg quotes William James (1892) as saying: “All our life, so far as it has definite form, but is a mass of habits.”

Here are some other interesting notes from the book Power of Habit (someone has rightly said that we are creatures of our habits.):

Duhigg says that with billions of things brain is doing 24/7, it has to be efficient and thus left to its own devices brain will make any routine into habit.

“An efficient brain allows to stop thinking constantly so that we can do important things for survival and devote mental energy to inventing spears, irrigation systems, and, eventually airplanes and video games,” says Duhigg. “The problem is that your brain cannot tell the difference between bad and good habits, and so if you have a bad one, it is always lurking there, waiting for the right cues and rewards.”

So, let us deliberately try to make the truth our habit because “Satyamev Jayate” (Trruth alone Triumphs.)