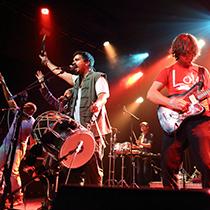 Red Baraat Festival of Colors is a celebration of Holi, a Hindu holiday marked by public gatherings of families, friends, and strangers rejoicing in song, dance, and the exchange of “colors.” The holiday signifies the victory of good over evil, the arrival of spring, and an opportunity to meet others, play and laugh, forget and forgive.

Tickets are $25 in advance, $30 day of, general admission. The Sinclair is an 18+, standing room only club. For tickets and information call World Music/CRASHarts at (617) 876-4275 or buy online at www.WorldMusic.org.

All ticket-holders are invited to an after-party featuring DJ Rekha (NYC) of Basement Bhangra. After-party takes place immediately following the performance at The Sinclair.

Famously dubbed “The best party band in years” by NPR, Red Baraat is a pioneering eight-piece band from Brooklyn, New York. Conceived by dhol player Sunny Jain, the group has drawn worldwide praise for its singular sound-a merging of hard driving North Indian bhangra with elements of go-go, rock, and jazz-fueled by three master rhythm makers, the muscle of horns, a raucous guitar, and a booming sousaphone.

The group’s recently released third studio album, Bhangra Pirates, features a key element that the first two did not: guitarist Jonathan Goldberger, whose surreal textures and percussive playing is the ideal complement to Jain’s thunderous dhol.

Along the way they sold out rooms as diverse as the Luxembourg Philharmonic and New York City’s iconic Bowery Ballroom and performed at the request of The White House, TED, and Olympic Games. Yet no matter how much success and notoriety Red Baraat has achieved, Sunny Jain and his comrades have never stopped experimenting or adding new elements to their peculiar alchemy.

DJ Rekha pioneered merging bhangra and Bollywood sounds with contemporary electronic dance music. Her debut album DJ Rekha presents Basement Bhangra features a track with Wyclef Jean. Named “Ambassador of Bhangra” by The New York Times, she has curated events for Celebrate Brooklyn, Central Park SummerStage, and has performed at the White House for President Obama and internationally. In January 2017 she was one of the official DJs for the historic Women’s March on Washington.

Tiger Shroff debuts on YouTube with his second single ‘Casanova’