A few years ago, Reshmaan Hussam and colleagues decided to find out why many people in the developing world fail to wash their hands with soap, despite lifesaving benefits.

Every year more than a million children under the age of five die from diarrheal diseases and pneumonia. Washing hands with soap before meals can dramatically reduce rates of both diarrhea and acute respiratory infections.

To that end, major health organizations have poured a lot of money into handwashing education campaigns in the developing world, but to little avail. Even when made aware of the importance of a simple activity, and even when provided with free supplies, people continue to wash their hands without soap—if they wash their hands at all.

“If you look at these public health initiatives, you see that they are often a complicated combination of interventions: songs and dances and plays and free soap and water dispensers,” says Hussam, an assistant professor at Harvard Business School whose research lies at the intersection of development, behavioral, and health economics. “Which means that when these initiatives don’t work, nobody can say why.”

When Hussam and her fellow researchers conducted their initial survey of several thousand rural households in West Bengal, India, they discovered that people don’t wash their hands with soap for the same reason most of us don’t run three miles every morning or drink eight glasses of water every day, despite our doctors lecturing us on the benefits of cardiovascular exercise and hydration. It’s not that we are uninformed, unable, or lazy. It’s that we’re just not in the habit.

With that in mind, the researchers designed a field study to understand whether handwashing with soap was indeed a habit-forming behavior, whether people recognized it as such, whether it was possible to induce the habit with experimental interventions, and whether the habit would continue after the interventions ceased.

The field experiment was based on the theory of “rational addiction.” Developed by economists Gary Becker and Kevin Murphy, the theory posits that addictions are not necessarily irrational. Rather, people often willingly engage in a particular behavior, despite knowing that it will increase their desire to engage in that behavior in the future (i.e. become “addicted”). As “rational addicts,” people can weigh the costs and benefits of their current behavior taking into consideration its implications for the future, and still choose to engage.

One way to test whether people are in fact “rational” about their addictions, Hussam says,is by looking at how changes in the future cost of the behavior affect them today. For example, if a rational addict learns that taxes on cigarettes are going to double in six months, she may be less likely to take up smoking today.

Hussam remains agnostic on whether the behavior of addicts (to cigarettes, drugs, or alcohol, for example) can be fully understood by the theory of rational addiction—“a theory that fails to explain why addicts often regret their behavior or regard it as a mistake,” she says. But she found the framework, which has historically been applied only to harmful behaviors, was useful to shift into the language of positive habits.

“Habits, after all, are like a lesser form of addiction: The more you engage in the past, the more likely you are to engage today,” she says. “And if that’s the case, do people recognize—are they ’rational’ about—the habitual nature of good behaviors? If they aren’t, it could explain the underinvestment in behaviors like handwashing with soap that we see. If they are rational, it can affect the design of interventions and incentives that policymakers can offer to encourage positive habit formation.”

The team’s experiment and findings are detailed in the paper Habit Formation and Rational Addiction: A Field Experiment in Handwashing (pdf), authored by Hussam; Atonu Rabbani, an associate professor at the University of Dhaka; Giovanni Reggiani, then a doctoral student at MIT and now a consultant at The Boston Consulting Group; and Natalia Rigol, a postdoctoral fellow at Harvard’s T.H. Chan School of Public Health.

In partnership with engineers at the MIT Media Lab, the researchers designed a simple wall-mounted soap dispenser with a time-stamped sensor hidden inside. The sensor allowed the team to determine not only how often people were washing their hands, but also whether they were doing so before dinnertime, critical to an effective intervention. (The idea for the hidden sensors came from a scene in Jurassic World in which one of the characters smuggles dinosaur embryos in a jury-rigged can of Barbasol shaving cream.) The data gave the researchers the ability to tease apart behavioral mechanisms in a way that earlier work (which often used self-reports or surveyor observations of hand hygiene) could not do. 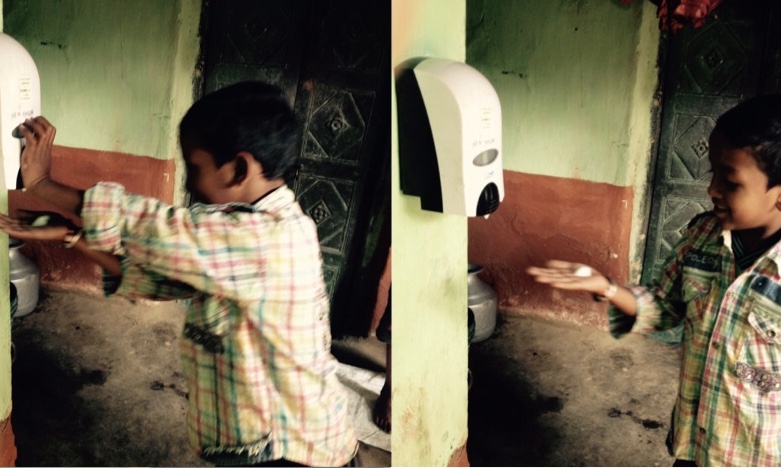 Researchers set out to discover whether they could induce households to develop a healthy habit of handwashing with soap. Here a young boy in West Bengal, India, uses a wall-mounted soap dispenser provided by the research team. (Source: Reshmann Hussam)

The researchers were also mindful about which type of soap to use in the dispensers. Through pilot tests, they found that people preferred foam, for example. “They didn’t feel as clean when the soap wasn’t foamy,” Hussam says.

And because all people in the experiment ate meals with their hands, they were turned off by heavily perfumed soap, which interfered with the taste of their food. So the experiment avoided strongly scented soap. That said, “we preserved some scent, as the olfactory system is a powerful sensory source of both memory and pleasure and thus easily embedded into the habit loop,” the researchers explain in the paper.

The experiment included 3,763 young children and their parents in 2,943 households across 105 villages in the Birbhum District of West Bengal, where women traditionally manage both cooking and childcare. A survey showed that 79 percent of mothers in the sample could articulate, without being prompted, that the purpose of soap is to kill germs. But while more than 96 percent reported rinsing their hands with water before cooking and eating, only 8 percent said they used soap before cooking and only 14 percent before eating. (Hussam contends that these low numbers are almost certainly overestimates, as they were self-reported.) Some 57 percent of the respondents reported that they didn’t wash their hands with soap simply because “Obhyash nai,” which means “I do not have the habit,” Hussam says.

The researchers randomly divided the villages into “monitoring” and “incentive” villages, taking two approaches to inducing the handwashing habit. In each experiment, there was a randomly selected control group of households that did not receive a soap dispenser; altogether, 1,400 of the 2,943 households received dispensers.

The incentive experiment “tried to price a household’s value of handwashing and forward-looking behavior,” Hussam says—in other words, whether financial incentives could increase handwashing rates, and whether those households would keep using soap even after the incentives stopped. In one incentive group, people learned that they would receive one ticket for each day they washed their hands; the tickets could be accumulated and cashed in for various goods and gifts in a prize catalog. In another group, people learned that they initially would receive one ticket each day for washing their hands with soap, but that in two months they would begin receiving triple the number of tickets for every day they used the dispenser. The final group received the same incentive boost two months into the experiment, but it was a happy surprise: The group had no prior knowledge of the triple-ticket future.

“The difference … is a measure of rational habit formation,” Hussam explains. “While one household is anticipating a change in future value of the behavior, the other household is not; if the first household behaves differently than their counterpart in the present, they must recognize that handwashing today increases their own likelihood of handwashing in the future.”

The results showed that both monitoring and monetary incentives led to substantial increases in handwashing with soap.

Households were 23 percent more likely to use soap if they knew they were being monitored. And some 70 percent of ticket-receiving households used their soap dispensers regularly throughout the experiment, compared with 30 percent of households that received the dispensers without incentives.

Importantly, the effects continued even after the households stopped receiving tickets and monitoring reports, suggesting that handwashing with soap was indeed a developable habit.More importantly, the experiment resulted in healthier children in households that received a soap dispenser, with a 20 percent decrease in acute respiratory infections and a 30 to 40 percent decrease in loose stools on any given day, compared with children whose households did not have soap dispensers. Moreover, the children with soap dispensers ended up weighing more and even growing taller. “For an intervention of only eight months, that really surprised us,” Hussam says.

But while it appeared that handwashing was indeed a habitual behavior, were people “rational” about it? Indeed they were, based on the results of the monitoring experiment.

“Our results are consistent with the key predictions of the rational addiction model, expanding its relevance to settings beyond what are usually considered ‘addictive’ behaviors,” the researchers write.

In the incentives group, the promise of triple tickets didn’t affect behavior much, but, as Hussam notes, that may have been because the single tickets were already enough to get the children their most coveted prize: a school backpack. “Basically, we found that getting one ticket versus getting no tickets had huge effects, while going from one to three did little,” she says.

But in the monitoring group, handwashing rates increased significantly and immediately, not only for those who were monitored but also for those who were simply told to anticipate that their behavior would be tracked at a later date. “Simply knowing that handwashing will be more valuable in the future (because your behavior will be tracked so there’s a higher cost to shirking) makes people wash more today,” Hussam says.

This, Hussam hopes, is the primary takeaway of the study. While the experiment focused on a specific behavior in/among a specific area of India, the findings may prove valuable to anyone who is trying to develop a healthy addiction—whether it be an addiction to treating contaminated drinking water and using mosquito nets in the developing world, or an addiction to exercising every day and flossing every night in the developed world.“Wherever we go, habits define much of what we do,” Hussam says. “This work can help us understand how to design interventions that help us cultivate the good ones.”

(Reprinted with permission from Harvard Gazette and Working Knowledge of Harvard Business School. )