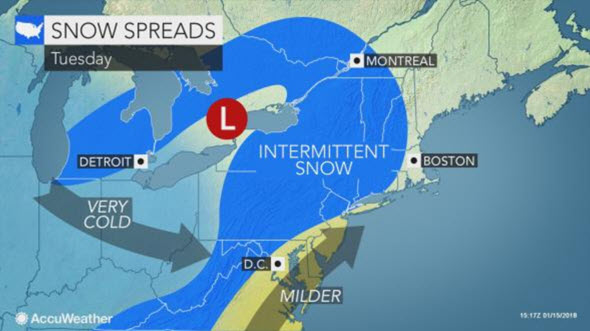 AccuWeather reports following an Alberta clipper storm that will spread snow to the central Appalachians into Tuesday, a new coastal storm is poised to blanket much of New England from Tuesday night to Wednesday.

Snowfall over much of the central Appalachians to much of the mid-Atlantic coast will be more of a nuisance as this area will be caught up in an atmospheric hand-off, according to AccuWeather Senior Meteorologist Kristina Pydynowski.

“The storm from the Midwest will weaken, while there will be a delay in the formation of a new storm over the Atlantic Ocean,” Pydynowski said.

That gap between storms will result in a light snowfall for much of Pennsylvania, New Jersey and New York state on Tuesday. Even so, enough snow may fall to make roads slippery.

Since temperatures will climb above freezing in Philadelphia, New York City, Washington, D.C., and other major metro areas in the Interstate 95 corridor on Tuesday, the roads may be wet at first. However, as colder air invades the storm, untreated roads and sidewalks are likely to become slushy and snow-covered.

“Motorists should be prepared for changing conditions during the Tuesday evening rush hour and Tuesday night,” Pydynowski said.

Delays due to deicing activities are likely in Philadelphia and New York City.

As the new storm strengthens and travels northeastward, a swath of 2-4 inches of snow is forecast to develop in northern New Jersey and the lower Hudson Valley of New York late Tuesday.

“Bombogenesis is not expected with the storm,” Pydynowski said.

However, if the storm strengthens quickly a few inches of snow may fall on New York City and Long Island, New York, as well.

Areas from central and northern Connecticut and to much of mainland Massachusetts, southeastern New Hampshire, coastal Maine and southeastern New Brunswick can expect enough snow to shovel and plow with a 4- to 8-inch (10- 20-cm) accumulation. 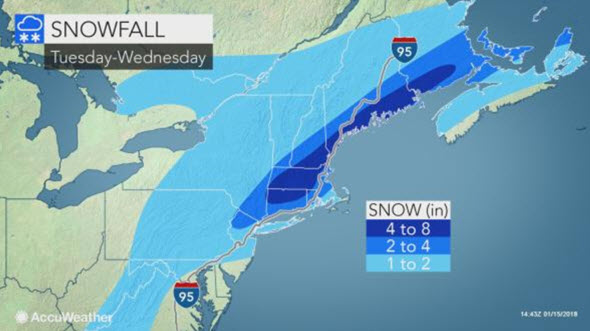 Substantial travel delays and disruptions to daily activities are likely in New England from the snowstorm on Wednesday.

Farther south, a separate storm is forecast to form in a similar manner near the Atlantic coast. That storm will spread a 1- to 3-inch snowfall from Virginia to northeastern North Carolina on Tuesday night and Wednesday.

While chilly air follows the storm, there will be natural melting during the day and a freeze-up of runoff and wet areas at night through the end of the week. Motorists and pedestrians should be on the lookout for areas of black ice.

(Alex Sosnowski is a Senior Meteorologist for AccuWeather.com.)