Shoba Narayan lived in the US for 20 years before returning to India. She is the author of the newly-published The Milk Lady of Bangalore: An Unexpected Adventure (Algonquin Books, $24.95.) The book is scheduled to be released on January 23, 2018. It is the spirited, inspiring and often funny true story of how two strong women from very different backgrounds bond over not only cows, but also family, food, and life.

Narayan writes about food, travel, and culture for Condé Nast Traveler, Financial Times, New York Times, Wall Street Journal, and Saveur. Her commentaries have aired on NPR’s “All Things Considered.” Narayan is the author of Monsoon Diary: A Memoir with Recipes, which was a finalist for a James Beard Award, and her essay “The God of Small Feasts” won the James Beard Foundation’s MFK Fisher Distinguished Writing Award.

Here is a Q/A with her on The Milk Lady of Banglore:

Q: The Milk Lady of Bangalore is filled with fascinating legends and myths about cows. Were most of these stories you learned growing up in India, or did you do a lot of research for the book?

A: A bit of both. I listened to a lot of stories from Hindu mythology while growing up in India. And they form part of my subconscious. What surprised me while researching the book was how central the cow was to Hindu mythology and faith—I wasn’t aware of that while growing up. As for now, well, you know how it is: once you start researching something, you see it everywhere. These days cows infuse my dreams and the stories that I tell my children.

Q: You describe Bangalore (or Bengaluru as it is now officially called) as a city where thousands of years of tradition are pitted against cutting-edge advancements in technology, where high-rises are built alongside slums and Uber drivers share the road with cows. From your own experience, how does this affect the day-to-day of the people living there?

A: Living in India, for me, is like magic realism. It is like being in some sort of fantastic circus where you never know what is going to happen. I think this is partly because India is teeming with life and nature, even in the most urban of environments. It’s common to see camels on highways, cows on the roads, parakeets on electrical lines. It may have something to do with the Hindu faith. Hindus don’t pesticide their neighbors in the natural world out of existence. In my modern high-rise apartment in Bangalore, for example, a lizard is hanging on my ceiling as we speak. It has delivered babies. I have baby lizards running across my ceiling. But this is supposed to be good luck, according to Hindu mythology. And so I enjoy these lizards sharing my home. 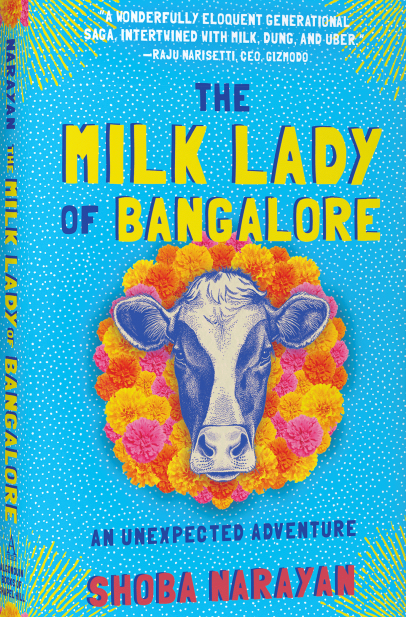 Q: What made you decide to chronicle your friendship with Sarala, the milk lady? How did Sarala and her family feel about your writing about them?

A: Knowing Sarala and her family has been a great privilege. She has taught me so much about living in the present, about dealing with adversity. I think any writer would see that Sarala is a wonderful character, too—she’s strong, opinionated, passionate about her family and her cows. I have to admit that though she was happy for me to write about her, she doesn’t read English and she was not all that interested in the result!

Q: Your book serves as a window into Indian and Hindu culture for those unfamiliar. What do you most want readers to take away from this vantage point?

A: Cultures are different. They contain contradictions. And humans contain multitudes. We ought to celebrate these differences. Enjoy them. And yet . . . Underneath all these differences, humans are the same. We are bound by love of family, country, and (unless you are an atheist) God. We may be tribal in our proclivities, but scratch the surface and we have the same fears and fantasies, the same ambitions and anxieties. It is these two seemingly paradoxical ideas that I would like to convey through my book.

Q: Can you share an intriguing “Only in India” belief about cows that you’ve come across during the writing of the book?

A: Some newborn babies are passed under a cow in order to bring them (the babies, not the cows!) good luck and remove the evil eye.

Q: You lived in the US for 20 years before returning to India. What inspired your decision to move back home?

A: In 2005, my husband and I were living in New York City with our two daughters, both born in America, but India was pulling on us, too, and it was tricky seesawing between two identities. India as a culture values closeness and pays no heed to privacy. America is about giving space and setting boundaries. Indian weddings are noisy, chaotic, messy, and not streamlined. American weddings have rehearsals. What is that about? Why would you need to rehearse a once-in-a-lifetime sacred act? Indian children sleep in their parents’ bed and bedroom for a long time. My American pediatrician encouraged independence from infancy. I was getting two contradictory messages—one from my mother, who encouraged co-sleeping, and the opposite from my pediatrician in NYC.

I wanted to give my daughters the coherence of living in one home where they didn’t have to grapple with so many different cultural messages. Plus, I was really missing my parents, grandparents, extended family of uncles and aunts, spicy food, fragrant flowers, and the warm weather and eternal sunshine of South India.

Q: After all those years living in New York, what American ways did you and your family take with you back to India (besides a preference for pasteurized milk)?

A: I came to America as a tabula rasa. I was a young college student from a sheltered family who hadn’t the space or time to think about things. America taught me independence, feminism, and instilled a spirit of adventure and enterprise. I am who I am because of this country and I love America and its people for that reason.
Beyond that, we carried back lots of memories. Fall in New England. My first snowfall. Summer

in Memphis, Tennessee. Driving beside the vast expanse of the Pacific Ocean on Highway One. The farms of Portland and Seattle, where we bought and picnicked on organic food. The honesty of the people in the Midwest, who are probably the inspiration for the acronym WYSIWYG (What You See Is What You Get). What else? Bagels, pizza, artisanal bread—the list could go on and on.

Q: And speaking of food . . . As a food writer, you must have a favorite recipe you’ve made with Sarala’s milk?

A: I do. Payasam is a kind of rice pudding and it’s delicious. Making it is very straightforward. Basically, you boil milk on low heat till it reduces to half its quantity. You mix it with cooked rice, sugar, some ghee, and some cashews. That’s the gist of it. Simple but delicious.

Q: Cows are sacred in India but they are also pretty funny at times. You have a great sense of humor, and that comes out in the book. How does humor inform your writing?

A: Much of the humor in my work comes from the rustic earthiness of the people I meet in India. The things they say, the way they see the world, and the colorful way in which they express themselves— all provide great fodder for my writing. You cannot make up this stuff, or rather, you don’t need to. So I observe and record. I also read a number of humor writers ranging from Jerome K. Jerome to David Sedaris to David Rakoff. All of that affects my writing as well.

Q: Your initial response to Sarala and her passion for all things bovine was skepticism, but by the end of the book, you write, “I have fallen in love . . . with cows.” What led to this change of heart?

A:  How could you not fall in love with cows? Look at their big limpid eyes, their silky skin, their graceful gait, their trusting look, the fact that every part of them serves humans. What’s not to love?