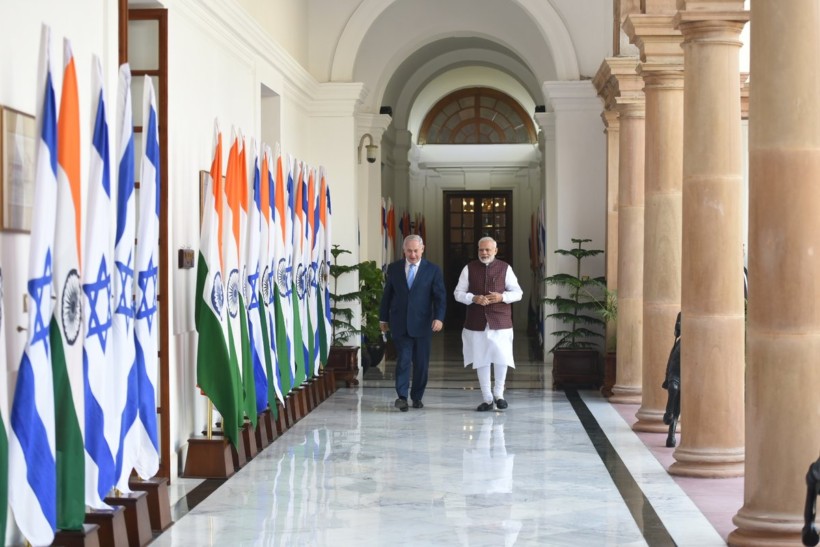 New Delhi– India and Israel on Monday pledged to fight terror as the two countries sought to broadbase their relationship on the silver jubilee of establishment of their diplomatic ties with Prime Minister Narendra Modi inviting Israeli companies to take advantage of the liberalised FDI regime in defence sector and to make more in India.

The two countries also underlined the the need for working towards Free Trade and Bilateral Investment treaties.

On the second day of his six-day visit to India, Israel Prime Minister Benjamin Netanyahu held talks with Prime Minister Narendra Modi, both one-on-one and delegation level, after which the two sides reached agreements in various fields including a Memorandum of Understanding on Cyber Security Cooperation.

Netanyahu showered praise on Modi saying he is a “revolutionary” leader who has catapulted India into the future.

A joint statement issued later said the two Prime Ministers agreed that renewed efforts were required to realise the full potential for bilateral trade and investment and noted that the next round of bilateral discussions will be held next month in Israel.

The Prime Ministers urged the private sector to actively explore investment opportunities in both countries, including through India’s flagship programmes such as Make in India, Start-Up India and Digital India.

Both sides noted the readiness of Israeli companies to enter into joint ventures with Indian companies in the defence sector under the Make in India initiative. They consider it important to set the direction for developing more business models and partnerships for joint ventures and joint manufacturing including transfer of technology as well as research and development in defence security fields.

Recognising the grave threat terrorism poses to peace and security including from non-state actors, Modi and Netanyahu reiterated that there can be no justification for acts of terror on any grounds whatsoever and advocated strong measures against terrorists, terror organisations, those who sponsor, encourage or finance terrorism or provide sanctuary to terrorists and terror groups.

They also noted with satisfaction that the next meeting of the joint working groups on homeland and public security will he held next month. They reiterated the importance of building comprehensive cooperation in counter-terrorism, including cyber-space and welcomed the signing of the Memorandum of Understanding on Cooperation in Cyber Security between India and Israel.

At a media briefing later, Vijay Gokhale, Secretary (Economic Relations) in the External Affairs Ministry, said both countries shared similarities in their approach to tackling terrorism. “The two countries have said we will not tolerate terrorism in any manner,” he said.

In reply to a question on not naming Pakistan in the document, he said it was not necessary to name countries each time. There was no divergence of views on the issue, he added.

To a question on cancellation by India of a deal with Israel for the purchase of 8,000 Spike anti-tank guided missiles, he said defence cooperation was discussed between the two leaders but he was not in a position to comment beyond that.

On bilateral investment treaty, Gokhale said there was need to negotiate on the issue for a second round of discussions.

At the interaction with the media, Modi said there were three ways of scaling up bilateral partnership. First, he said, it can be done by strengthening the existing pillars of cooperation in agriculture, science and technology and security.

He said the second way of enhancing bilateral cooperation is by “venturing into less explored areas of cooperation, such as oil and gas, cyber security, films, and start-ups”.

“Several of these areas are indicative of our desire to diversify and broad-base engagement,” he said.

The third way, Modi said, to boost ties would be by “facilitating the flow of people and ideas between our geographies”.

“We are working with Israel to make it easier for our people to work and visit each other’s countries, including for longer work durations. To bring people closer on both sides, an Indian Cultural Center will soon open in Israel.”

The Indian Prime Minister also said that both sides have decided to start an annual exchange of bilateral visits by 100 young people from science-related educational streams.

India and Israel signed nine agreements following the talks, including two memorandums of understanding (MoUs) on cooperation in the areas of oil and gas and cyber security, and two letters of intent between Indian Oil and two Israeli entities on metal-air batteries and solar thermal technologies.

On bilateral economic relations, Modi said that “thriving two-way trade and investment is an integral part of our vision for a strong partnership”.

Modi expressed hope and optimism about India-Israel ties, and said: “In Prime Minister Netanyahu, I have a counterpart who is equally committed to taking the India-Israel relationship to soaring new heights.”

Netanyahu said Modi’s historic visit to Israel last July, the first by an Indian Prime Minister, “excited all Israelis and of course many Israelis of Indian descent and origin”.

“Jews in India have never witnessed anti-Semitism like in some other countries,” he stated. “This is a tribute to India’s great civilisation, tolerance and democracy.”

“We remember the horrific savagery in Mumbai (2008 terror attacks), we will never give in and will fight back,” Netanyahu said.

The two sides also discussed the situation in West Asia and UN Security Council reforms but Iran’s nuclear programme did not figure.

The personal chemistry Modi and Netanyahu share was again evident in the address to the media when the two leaders warmly hugged each other.

Earlier on Monday, the Israeli Prime Minister was accorded a ceremonial welcome at the Rashtrapati Bhavan here.

Netanyahu, accompanied by a 130-member business delegation, arrived here on Sunday on a six-day visit to India that will also see him going to Agra, Ahmedabad and Mumbai.

This is the first Prime Ministerial visit from Israel to India in 15 years after that of Ariel Sharon in 2003. (IANS)