BURLINGTON, MA–NE SRS Brundavan, the first official US branch of the famous Mantralayam Shri Raghavendra Swami Mutt, is celebrating the 2nd Madhwa Navami in the Greater Boston area on Feb 3 in Burlington, MA.

The event, which will be held from 9:00 am to 2:00 pm at the Academy of Creative Arts in Burlington, offers many highlights, including Panchamrutha Abhisheka and Betel leaf seva to Hanuman, the honoring of the sacred Sarva moola Grantha, Vayu Stuti, Madhwa Nama, Sumadhwa Vijaya recitations and also Raghavendra Swami Paduka and Ashttotara Puja.

As a hallmark tradition of Raghavendra Swami mutts, a traditional lunch or theertha prasada will be served free of cost to all.

Acharya Madhwa is one of the three main stalwarts (alongside Adi Shankara and Ramanujacharya) of the Bhakti movement that swept medieval Hinduism. Acharya Madhwa offered detailed clarifications and corrections on the interpretation of the Vedas and established the Tattva vada or Dwaita Philosophy where he recognizes that the material physical world is real and not an illusion and that there is only one supreme being or paramathma – Hari or Krishna and all other Gods and life forms (Jeevaathma) are just aspects of that supreme being.

He propounded that each jeevaathma can achieve Nirvana in their own level thus making this an attainable goal for all. Given his emphasis on the realness of this world, Acharya Madhwa also stressed on the importance of a physically fit body as a vehicle of spiritual practice and is considered a reincarnation of the mighty Hanuman or Vayu and Bheema. 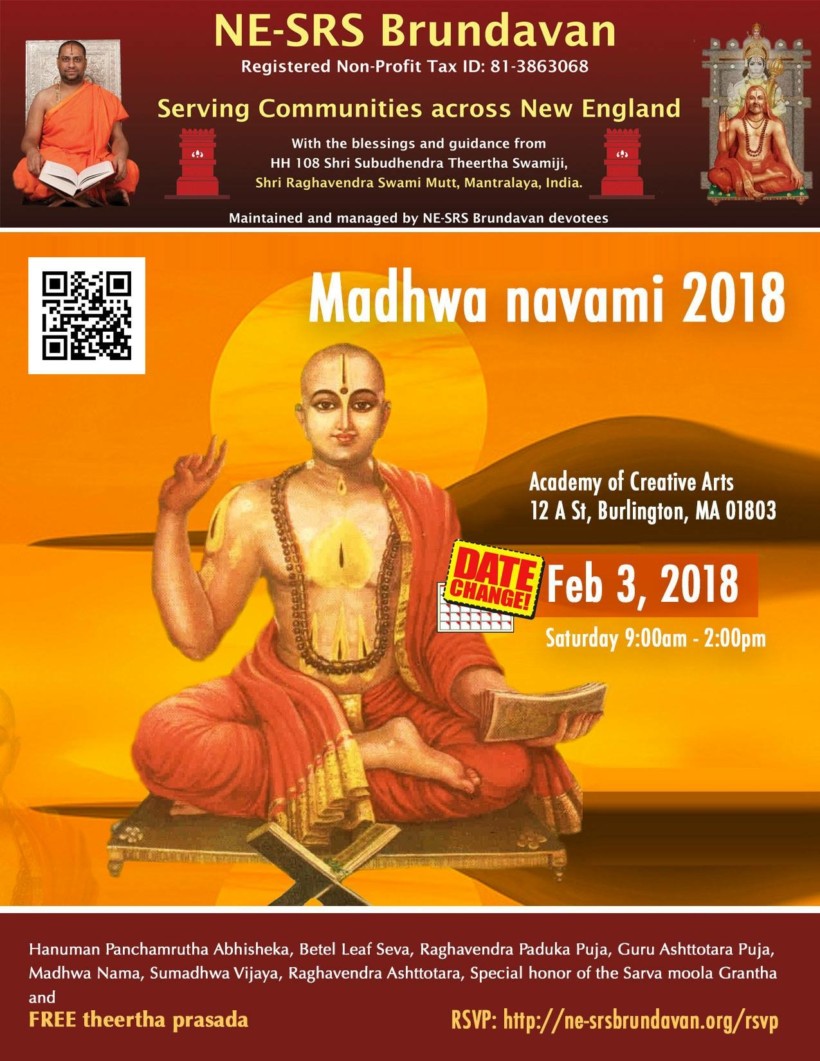 Acharya Madhwa established the famous Udupi Krishna temple and 8 mutts or schools to run this temple by turns. This in turn established a strong Guru lineage. One such unbroken lineage stemming from Madhwacharya includes Raghavendra Swami and Shri Subhudhendra Theertha, the current pontiff of the Mantralaya mutt under whose guidance NE SRS Brundavan operates.

A prolific writer, Madhawacharya produced a colossal body of work – over 40 major monographs. His teachings also became accessible to the common man because as a musicologist, he set many of his works such as the Dwadasha Stotras to melodious music. This also established a strong lineage of musicologists in the Haridasa tradition including Raghavendra Swami, Purandara Dasa, Kanaka Dasa etc. who composed many devotional hymns/Bhajans in Kannada, the language of the common man rather than Sanskrit and these songs are sung to this day and part of the fabric of many people’s upbringing. This Haridasa tradition also had a seminal influence on the Carnatic music art form.

On the 9th day of the Lunar month of Magha Masam in the year 1317 AD, a heap of flowers showered on Sri Madhwacharya while teaching his disciples at the Sri Anantheshwara Temple and he disappeared into the heap of flowers, never to be seen later. This day is celebrated as Madhwa Navami and offers us an opportunity to honor this great soul whose intellect and teachings still guide us to this day. Join us celebrate Hanuman, Madhwacharya and Guru Raghavendra Swami with your family and community.