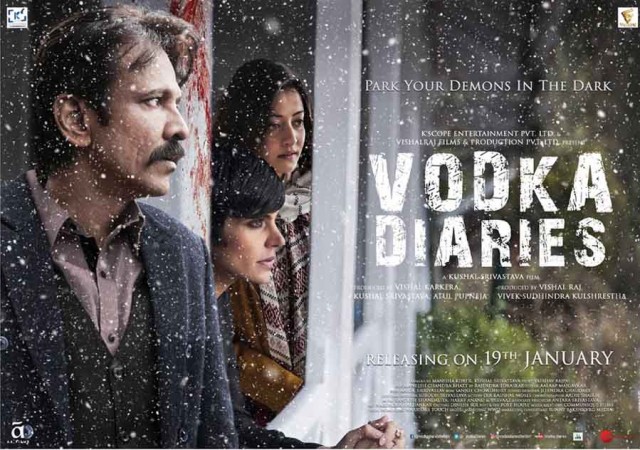 “Vodka Diaries” conjures a visual of some intoxicating secrets. But alas, the title is a forced misnomer. In fact, it is a corny psychological drama that’s mounted on an equally convoluted plot.

Crime and poetry are married in the form of ACP Ashwini Dixit (Kay Kay Menon) and an amateur poet Shikha (Mandira Bedi). They are holidaying together in picturesque Manali.

The setting makes for a perfect romantic break, except that the couple’s holiday is punctuated with mysterious murders that need to be solved. While that’s the impression one gets in the first act, the second act totally topples the first with the resurrection of the dead. And the third act turns out to be a redemption tale.

With writing credits given to four writers, the writing and execution of the film is its Waterloo. The dialogues are cheesy and the screenplay weak. The first 15 minutes of the narrative meanders with poetry and random conversation, except for an insert that informs us about a recurring nightmare that Ashwini gets.

What follows is, the murder of five people. Every death is linked to the shady hotel in a town called Vodka Diaries. And after the disappearance of Shikha, when Ashiwini visits the hotel, he finds the other victims present and you realise this film is more than a murder mystery.

The performances of every actor seems staged and tedious to watch. Talent is definitely wasted here.

Ace actors like Kay Kay Menon and Sharib Hashmi who plays Ashiwini’s faithful lackey Ankit, are relegated to doing the mundane act, which they do with aplomb. But unfortunately it simply seems like they are sleepwalking through their roles. So are Mandira Bedi as Shikha and Raima Sen as the mysterious woman Roshni Banerjee, who later has a meaningful justification for her character.

Mounted with moderate production values, the production designs are appropriate and realistic. The visuals through Maneesh Chandra Bhatt’s lens are clear and sharp but Aalaap Majgavkar’s editing is a bit slack. The transitions in certain scenes are clumsily handled.

Overall, “Vodka Diaries”, which is supposed to be a layered tale, is a miserable downer. (IANS)