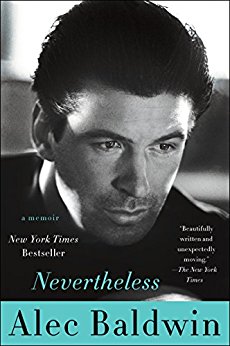 Unforgettable actors are renowned for the sheer variety of roles in their onscreen careers, though their normal lives beyond the limelight may not be as dramatic as these portrayals. Alec Baldwin could, however, well qualify — he may have learnt to operate a nuclear submarine for one of his roles but the way he rose to the heights where he is from his origins is the stuff of epics.

We know Baldwin, the eldest of the four acting brothers, as equally capable with action, romance but especially comic roles, which he plays with panache, or for his roles, leading or supporting, in films spanning “Beetlejuice”, “Pearl Harbor”, “The Marrying Man”, “Ghosts of Mississippi” to the “Mission Impossible” franchise. He was once married to Kim Bassinger. He is famous for his portrayals of Donald Trump, before and after he became President, in “Saturday Night Live”. What more could make him stand out?

Much more, as Baldwin tells us in this most disarmingly candid, introspectively insightful, totally unpretentious and quite moving account of his life before, during and beyond movies. It is rendered with no sense of self-pity — as far as his impoverished background was concerned — but redolent of his trademark wit and keen observation.

Beginning with a list of desired occupations spanning proprietorship of a bespoke stationery shop to prison warden to nightclub owner (like Rick Blaine of “Casablanca” whom “all men would envy” and “women, against their better judgment would throw themselves at me nightly”), he tells us he didn’t intend to become an actor.

“I didn’t end up choosing any of these careers and fell into a completely different line of work. I never imagined I would do what I’ve done for a living or see what I’ve seen,” he says, adding that, through acting, he could satisfy some of the desires of the imagined careers.

And he admits that he didn’t want what most people in the entertainment industry seek for his relationship to it was much simpler. “Acting was a way to ease, though never eliminate, the financial anxieties of the boy from South Shore Long Island who remains in me today,” he says, also revealing he wrote this book “not to discuss my work, my opinions or my life” but because he was “paid to write it”.

Frequently seen portraying powerful immoral men or narcissistic though inherently moral characters, Baldwin grew up in a small, not very fashionable, house on New York’s Long Island where he and his five siblings (three brothers and two sisters) shared one of its two rooms.

After an evocative — and fairly exhaustive — description of his surroundings, his struggles, his relationship with his parents (to whom he pays tribute for letting none of him and his siblings fall into bad ways), he moves to his entry into show business — via soap operas and then theatre. This was where he changed from Xander, as his parents had named him, and the biggest challenges were developing a liking for alcohol and fending off gay agents.

When it comes to his Hollywood career, Baldwin may disappoint by forsaking a “tell-all” account full of juicy gossip for a more nuanced approach of his perceptions and observations of top actors, directors and the whole business itself.

Interesting details are, however, not absent entirely — fans of Sean Connery will find his treatment by his wife at a party for “The Hunt for Red October” (1990), in which Baldwin played the key role of the hero — CIA analyst Jack Ryan — particularly hilarious, while admirers of Tom Clancy, on whose bestseller it was based, will find the author’s treatment on set and comments on the film version absorbing. The actor’s own fans will also come to know why he did not reprise the role of Jack Ryan in subsequent installments of the franchise.

There is much more about Baldwin’s take on movies he did (including less known ones and why he did them and what he liked about them), movies he wished he could have done and movies he is inspired by (“The Godfather”) and the people he has worked with — and those he admires (at the very last).

As said, it is not a conventional movie memoir — even for hardcore fans, but as an account of rising above straitened circumstances and the reality of showbiz, its unlikely to be bettered. (IANS)