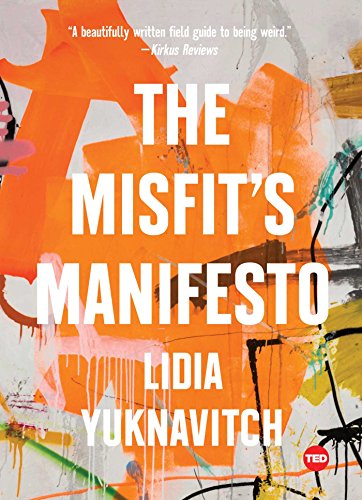 In a materialistic world which emphasises more on conformity, convention and success, those who prefer not to abide by these rules of “normalcy” are rarely lauded. They can expected to be labelled mavericks, even weird, but usually “misfits”. But what do they think of themselves, how did they get that way, and do they have any use?

But first we must know what the word “misfit” means exactly — and what it does not — says American author Lidia Yuknavitch, who holds her eventful life qualifies her to be called one, and is a badge she wears with pride.

There is a “lot packed into that little word”, she holds in this book form of her acclaimed TED Talk “The Beauty of Being a Misfit”, but clarifies that misfit doesn’t mean anyone who occasionally feels weird, lonely a failure or left out. Nor does it mean feeling out of place, resenting social roles, or caught in a midlife crises “though these states of being are important”.

While the Urban Dictionary definition, which, among others, says misfits are individuals “who do not fit into any one clique quite right”, “tend to be outcast for no reason”, have few good friends, usually intelligent and mature, and “sometimes sort of insane and depressed…”, Yuknavitch says she uses the term for those who “never found a way to fit in at all, from the get-go, all through our evolving lives, including in the present tense”.

And in this book, she chronicles cases of those who “experience that altered state of missing any kind of fitting in so profoundly that we nearly can’t make it in life” and quite a few give up in desperation. But, as she stresses, her intention is not to draw pity but substantiate how and why the world needs misfits.

Drawing from her own case — of an abusive parent, failed marriages, loss of a child, near-fatal accidents, addiction and rehabilitation, dismissal from jobs before success as a novelist — Yuknavitch goes on to dwell on how realising and acknowledging her “misfittery” and “understanding it as a way of being and seeing in the world, saved my goddamn life”.

And in telling her own story, and of many others she has come across with stories akin to hers with experiences of failing to enter the domains of cultural and social organisations (relationships, families, communities, et al), she says this would have something important that “might help the rest of us get by, if our stories could be amplified”.

It is scarcely a comforting journey, with abusive parents, dysfunctional families, dashing expectations, other traumas, alienation, lack of success in most aspects of life relationships and work, addictions, kinks, confused sexual identities, feelings of inadequacy, the death of all hopes and more disheartening stuff.

At the same time, Ken Kesey, the author of “One Flew Over the Cuckoo’s Nest”, which also became a cult movie, also makes an appearance, while there are a wealth of insights into the human condition.

One misfit recalls how his efforts to blend in with the others at school by acquiring knowledge about a common interest led them to think he was “so much weirder for my efforts”, how one saw everything they did treated with derision, many show the observation that suffering makes you stronger is a myth — and even more lethal.

And above all, the importance of humanity, given that the questions that misfits ask themselves cannot be answered by Google.

There are heartening stories of how misfits never lost their humanity or discovered how the dismal patterns of their lives could motivate themselves to seek refuge and release in creativity, artistic, literary or other. As Yuknavitch cites some key advice she got: “Don’t listen to anyone who tells you to change your voice…” and “Sometimes telling the story IS saving your own life”.

There is a also powerful strand of hope and redemption, as well as the salutary point that misfits give each other a second (and third or more) chance. Shouldn’t those who fit look up from their satisfied lives, their money fixations or smartphones to do to the same? (IANS)