Mumbai–It’s a rare capture, Bollywood veterans like Rishi Kapoor, Danny Denzongpa, Prem Chopra, Jeetendra, Paintal and Ranjeet got together for a meeting during which they bonded over memories. 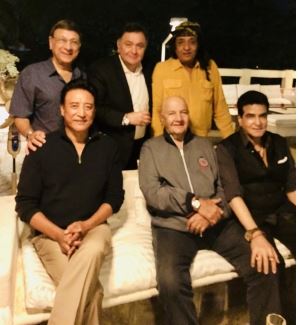 Each actor in the frame has made significant contribution in the Hindi film industry.

On the acting front, Rishi will soon share screen space with megastar Amitabh Bachchan in the upcoming film “102 Not Out”.

Directed by Umesh Shukla, the movie tells the story of a 102-year-old man, essayed by Big B, and his 75-year-old son, played by Rishi.

Mumbai–Superstar Shah Rukh Khan, reminiscing the fate of his production “Phir Bhi Dil Hai Hindustani” which released on this date back in 2000, says its failure led him to be stronger.

“This one was special. It was a complete disaster and completely written off. Our failure made us, Aziz Mirza, Juhi Chawla and me stronger. Love ‘Phir Bhi Dil Hai Hindustani’,” Shah Rukh tweeted.

The movie was produced under the banner Dreamz Unlimited, which Shah Rukh had created with Juhi Chawla and Director Aziz Mirza. It was later transformed into his current banner Red Chillies Entertainment.

“Phir Bhi Dil Hai Hindustani” saw Shah Rukh play Ajay Bakshi and Juhi as Ria Banerjee — two television reporters for rival news channels who try to save the life of a man who has been fixed by a politicians for the death of his brother, from a death sentence.

Vijay Deverakonda back to complete ‘Taxiwala’

Mumbai–After a New Year break that took him all over Belgium, actor Vijay Deverakonda is back in the studios to shoot “Taxiwala”

“Taxiwala” is his first project after the release of “Arjun Reddy”.

“We’re looking at a March release. The film requires a great deal of post-production work. It’s got a whole lot of computer-graphics and special-effects. And we don’t want to rush,” said Vijay.

“They are more open to new ideas. So the whole process of creating a film becomes more inclusive and participative. I was almost a unit-hand with Sandeep Vanga, my director of ‘Arjun Reddy’. Now it’s the same with Rahul Sankrityayan, director of ‘Taxiwala’.We are trying to create something worth the audiences’ time and money.”

Vijay has opted a role diametrically opposite to “Arjun Reddy”.

“In ‘Taxiwala’, I am not ‘Arjun Reddy’. In fact the two characters are so different that if they were to meet they’d hate each other. For me, as an actor it was important not to do more of ‘Arjun Reddy’ just because the audiences liked what they saw,” he said.

Working with Prabhas in ‘Saaho’ is great opportunity: Shraddha Kapoor

Mumbai– Actress Shraddha Kapoor, who was present at the inauguration of “The Wedding Junction Show” here on Saturday, said working with actor Prabhas in “Saaho” has been a great opportunity for her.

Talking about “Saaho”, Shraddha said: “I am definitely excited to be able to work with Prabhas. It’s the first time I am shooting for a Hindi and Telugu bilingual film. It will also be dubbed in other languages. This is a great opportunity for me.”

Shraddha and Rajkumar Rao-starrer “Stree” is currently on floors, and the actress is very excited for the same. “This is the first time, I will be part of a horror-comedy film, and that makes it even more exciting.”

“This is the first time I’m debuting in this dance form and in fact it’s not that easy as it sounds. I got injured a few times already while rehearsing but I have to thank my choreographer Brinda Master for helping me ace this style,” Tamannaah said in a statement.

“Naa Nuuve” is a romantic tale between a radio jockey and an acquaintance, where Tamannaah will essay a radio jockey named Mira while Nandamuri will play her lover.