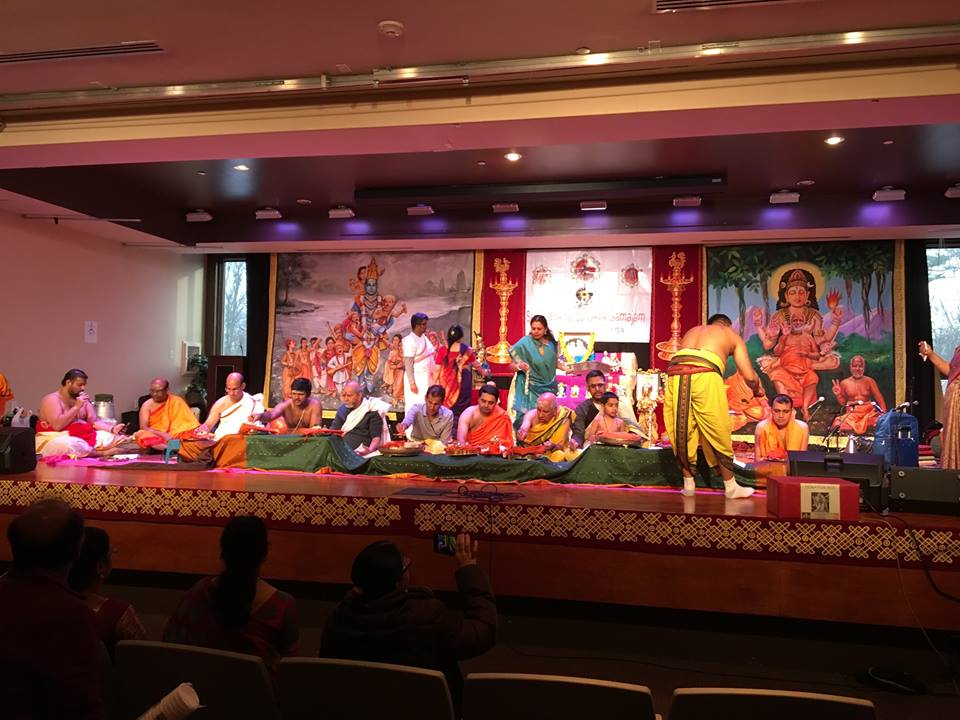 Called “Namaruchi”, the two-day event was a grand festival of music and dance based on the Southern Indian bhajan tradition. Namaruchi pulled in vocalists and percussionists from ten states and Canada, and brought to life the magic and joy of the practice of “nama sankeertana” – dwelling on the attributes of the divine through song and dance.

The audience was not expected to just passively listen, but instead was actively encouraged to join in the chorus by repeating after the singers and joining in dance. The soul-stirring songs in several different languages, set to classical Indian ragas, Marathi abhangs and folksy tunes, and filled to the brim with bhava and bhakti, evoked spontaneous dances of joy in adults and children alike. What a way to end the year! 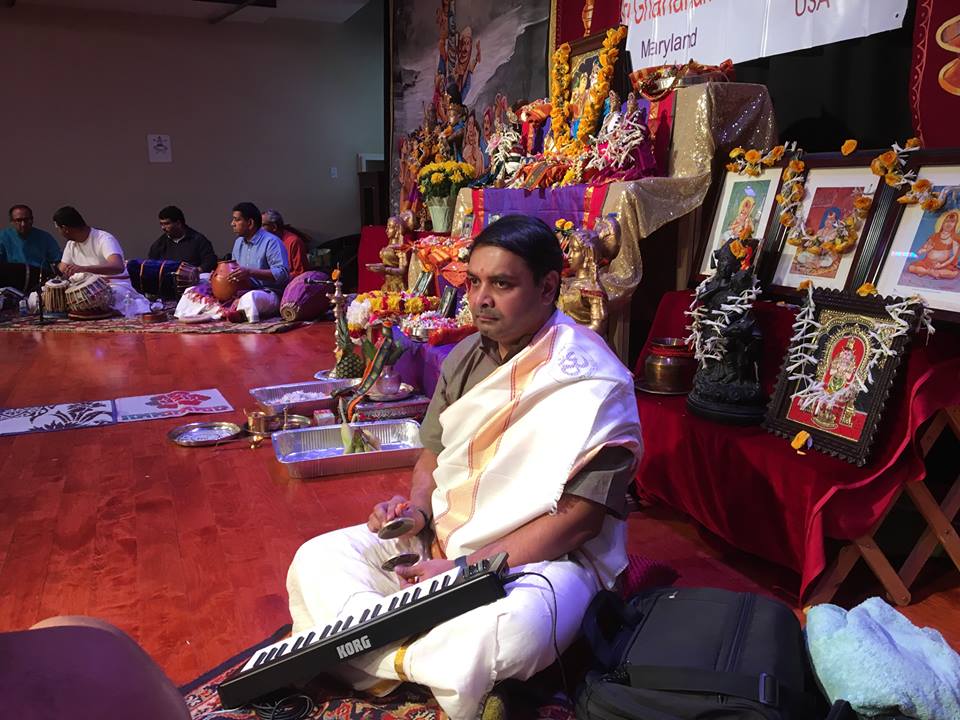 “Nama sankeertana”, which literally means extolling the names of the divine, forms the core foundation of the traditional Southern Indian Bhajan system or paddhati known as “Sampradaya Hari Hara Bhajan”. Even though this padhdhati was established in Southern India, it draws from and integrates musical compositions of great saints from Northern India such as Mirabai, Kabirdas, Tukaram, Ramdev, Namdev, Jnaneshwar, Chaitanya, and Jayadeva, as well as Southern Indian composers such as Narayana Theertha, Bhadrachala Ramadasa, Thyagaraja, Purandaradasa, and various bhagavatas in the tradition.

Many songs in the tradition are therefore in Marathi (including many abhangs on Lord Panduranga Vittala of Pandaripur) and Hindi, as well as in Sanskrit, Kannada, Telugu and Tamil. This unusual melding of the Northern and Southern traditions is perhaps explained at least in part by the fact that the trinity of illustrious Gurus who established this tradition, namely Sri Bodhendra Saraswathi Swamigal (1638-1692) who later served as 60th Shankaracharya of the Kanchi Mutt,  Sri Sridhara Venkatesa Ayyaval (1635-1720), and Sri Venkatramana Dikshitar, popularly known as Sri Marudanallur Sadguru Swamigal (1777-1817), lived in the Cauvery Delta area in Tamil Nadu in the 17th and 18th centuries, when this area was ruled by Maratha kings.

Sri Sadguru Swamigal is credited with shaping the core of the tradition, and several bhagavatas including Sri Gopalakrishna Bhagavatar, who appeared in the two centuries since, embellished the tradition further. In modern times, Sri Haridhos Giri Swamigal, a disciple of Sri Gnanananda Giri Swamigal (who served as the head of the Jyotir Math which was established by Sri Adi Shankara himself) not only brought the Bhajan tradition to the mainstream of music by making it an integral part of the December Music Festival in Chennai, but also spread the tradition all over the world. One of the lead bhagavatars in the Nama Ruchi event, Sri Gurunathan is a direct disciple of Sri Haridhos Giri Swamigal, and is blessed with a wonderful commanding baritone voice like his Guru.

Dwelling on the Divine

The first day of the Namaruchi festival was dedicated to dwelling on the divine through music and dance. The highlights of this day were a musical treat in the morning consisting of the Ashtapadi songs from the 12th century Sanskrit poet Jayadeva’s Geeta Govinda mahakavya, and a dance ecstasy accompanied by wonderful Bhajans known as “Divya Nama Sankeertana” in the evening. However, these were just two events in a bhajan paddhati with a program sequence that was developed and refined over the centuries. This sequence was adhered to faithfully in the Namaruchi festival generating a wonderful aura consisting of divine sounds and dances filled with devotion.

The sequence started with “Naamaavali” (a melodious stringing together of names of the Lord) and “Pundaleekam” (exhortations to remember and salute the Lord), and continued with shlokas and songs dwelling on various deities and Gurus, followed by “Thodaya Mangalam” (a compilation by Sri Sadguru Swamigal of songs composed by various saints) and Marathi devotional songs known as “abhangs”. The afternoon reverberated with “ashtapadi” songs from Jayadeva’s Gita Govinda (Song on Krishna). Ashtapadis consist of 8 verses each and are based on the story of Lord Radhakrishna as narrated in the tenth puraana composed by the great Sage Vedavyasa. It is a story of divine love between Sri Krishna and Radha Devi, their separation and subsequent reunion. Even though the story exudes srungara rasa, it is interpreted as depicting the relationship of love between the individual and the Lord. Singing of the ashtapadis is a deeply devotional experience, and is accorded the same status as chanting of the Vedas. The bhagavatas sang 21 of the 24 ashtapadis, in a variety of ragas, including bhairavi (the second ashtapadi), pantuvaraali (the third ashtapadi), bilahari (the ninth ashtapadi) and shankarabharanam (the twelfth ashtapadi). The remaining three ashtapadis were reserved for the Radha Kalyanam event on the second day.

This evening event consisted of ecstatic dancing around a ceremonial panchamukha (with 5 wicks) lamp by devotees, as the bhagavatas rendered beautiful bhajans. The theme of the bhajans was to sing the names of divinities and extol their positive attributes, and thus the underlying attitude was one of joy rather than complaint, pleading or an expression of virakti bhava. The lamp represents the Lord and the “deepa pradkshina” (circumambulation of the lamp) signifies being in the Lord’s company and courting his friendship through ecstatic dance and, and forgetting oneself in bliss.

Doing the deepa pradakshina is accorded the equivalence of circumambulating the Universe and visiting all the sacred pilgrimage spots. All devotees present were invited to come to the stage in small groups to join the dance, reminding them of Lord Krishna’s promise that “I will take care of one who leaves their shyness to dance with Him”.

The lamp was first brought to the center of the stage dancing to the rhythm of “Sri Rama Sri Rama” (Raga: Kedaram) and reverentially placed on a pedestal inviting Sri Rama to be there (“Rama Bhadra Raa”, Raga: Anandabhairavi). The bhagavatas then danced around the lamp inviting the presence of Lord Krishna and were joined by ladies and little girls. The next song in Kannada (“Deva Banda Namma”, Raga: behaag) got ladies out of their seats and dancing in the hall, and the song after (“Ambe Gowri Mayya”, Raga: beemplaas) drew them to the stage. After this there was a steady stream of groups of women, children and men dancing in joy to various bhajans including “Dhanya Ho Pradakshina” (Raga: Maandu), “Krishna Rama Govinda” (Raga: Punnnagavaraali), “Kamala Vallabha Govinda” (Raga: Shankarabharanam), “Gora Bhavaarnava” (Raga: Kaapi) and Mirabai’s “Hari Guna Gaavat” (Raga: Madhyamaavati). The cherry on the cake was a triplet of brisk and lively Bharatanatyam dance items by Amrita Thirumalai and Shreya Srinivas, students of Guru Sridevi Ajai Thirumalai.

The first 21 ashtapadis portray a story of the joy of love and pain of separation between the divine lovers Krishna and Radha. The lovers are finally united through a celestial wedding known as Radha Kalyanam. The last 3 ashtapadis are reserved for this Radha Kalyanam event that was the highlight of the second day of the Namaruchi festival. In this divine wedding, which signifies the merging of the jeevatama (individual soul) with the paramatma (universal soul), rituals of a traditional Southern Indian wedding are enacted with music and dance that are filled with bhakti bhava towards the bride Radha Devi and groom Sri Krishna. 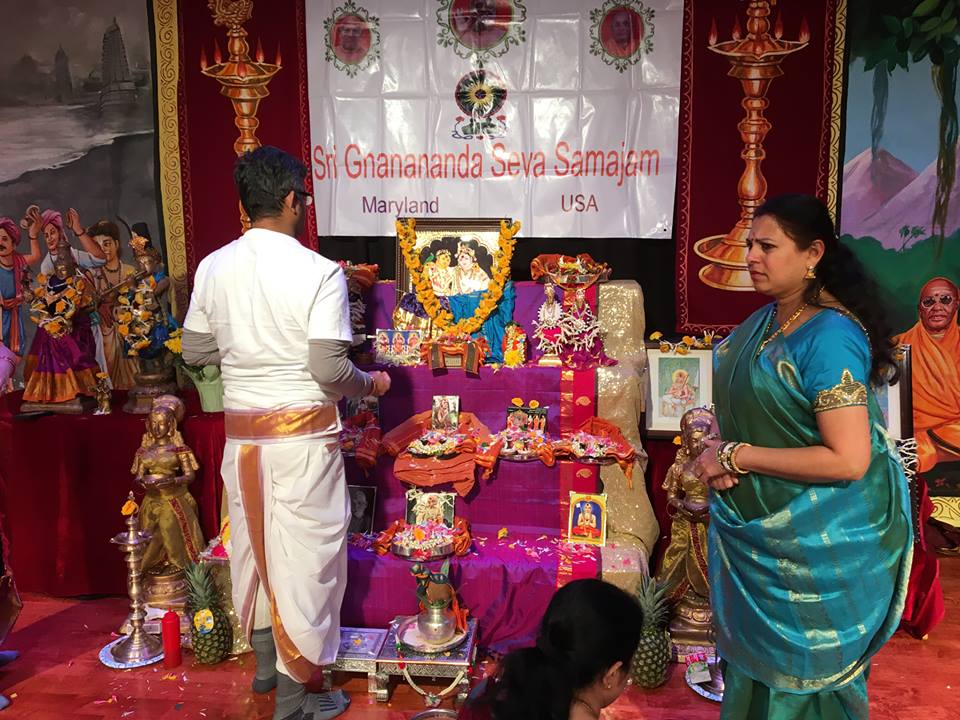 The wedding rituals commenced with the beautiful “Gowri Kalyana Vaibhavame” sung in chorus in raga kedaram led by Sri Gurunathan Bhagavatar. Next came “Muthu Kuthal”, a ritual in which sanctified rice (“akshata”) is offered into a mortar (“ural”). Devotees then crush the rice with a wooden rod (“ulakkai”). The symbolism here was explained as cleansing of oneself in front of the Lord by offering all karmas to Him. This ritual again was packed with beautiful songs as men, women and children walked on to the stage to place rice in the mortar and crush it with a wooden rod to the rhythm of songs sung in raga nadanamakriya (“Allo Neledallo”, “Paahi Maam Gopala”, “Krishna Krishna”), anandabhairavi (“Soovi Soovi”) and punnagavaraali (“Soovi Soovi”). The “Musala Narthanam”, a dance meant to convey the joyful enlightenment of bhagavata couples, who danced together holding the “ulakkai” rod which represents the ultimate knowledge of Omkara. Next, couples in traditional dress representing the bride and groom’s parents exchanged silk garments and other wedding presents, accompanied by the chanting of mantras. The lineage (“pravaram”) of the bride Radha Devi and groom Sri Krishna was chanted out aloud by the bhagavatas thrice, and a couple of ladies depicted through dance the exchange of garlands between bridge and groom. “Lagnaashtakam”, a sequence of songs that announced the names of the divine guests who arrive to witness this divine wedding, provided more opportunity for music. Priests then performed the “mangalya dhaarana” (adorning the bride with the wedding necklace) on behalf of the groom signifying the solemnization of the marriage. After this the bride and groom were celebrated as a couple through various “nalangu” songs. Finally, the divine groom and bride were given a musical send-off into their private quarters in a ritual known as “dolotsavam”.

This magical and deeply divine experience was brought to Boston by Gnanananda Samajam USA, by the generous bhagavatas, percussionists, the Namaruchi event organizers and volunteers, and devotees who braved the cold and took the time and effort to travel from various parts of the United States and Canada to participate in the event. Every one of them deserves the community’s gratitude for bringing this wonderful experience to us.