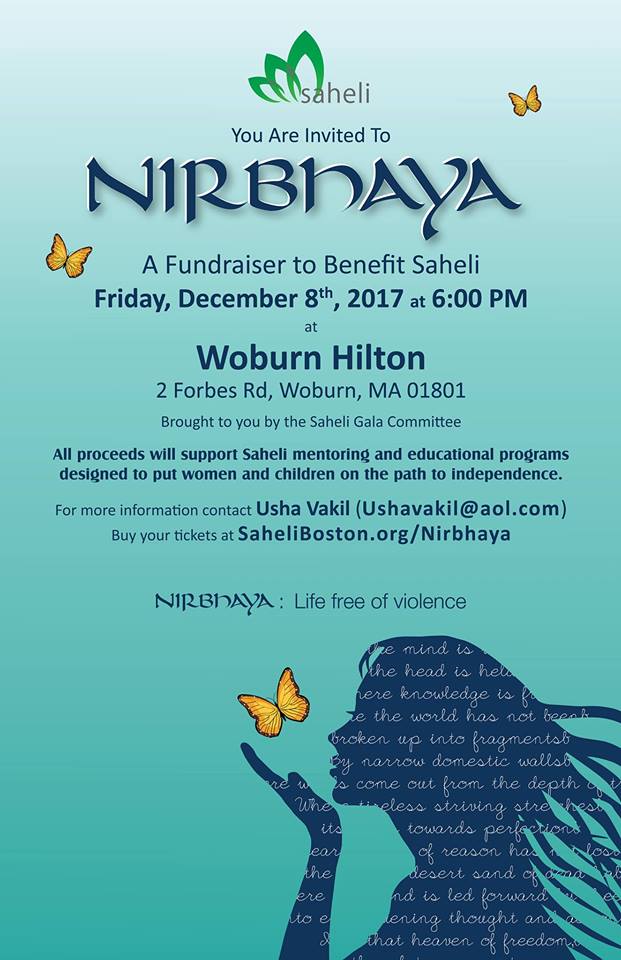 (Editor’s note: This is the first hand account of a newly-wed Indian survivor of cheating and domestic abuse in Boston. She was married for less than a year when she walked into Saheli’s office in Burlington, MA, and with a heartbroken father at her side. Depressed, isolated and ignored by friends and family, she turned to Saheli for help. Now, she is back in India, and wants the world to hear her story. Here it is in her own words. We have withheld her name for privacy.)

I thought this only happened in India. I never thought men abused women in the US.

In the winter of 2016, I got married in India and came to the US to join my husband. I had no idea what my life would turn out to be!  It all began when we were landed in Boston and were at immigrations. One officer pulled my husband aside informing him he had trespassing charges and must always go through special security every time he enters the country. When I asked him about it, or why he never told me what the issue was, he got angry and told me to mind my own business.

That December, we spent time getting to know each other, but I was not aware of the fact that he was lying to me about many things. One day his mother called me and questioned me about not spending time with her son. After that phone call things started getting worse between us. We were constantly fighting and arguing almost every day. He would sneak out at night and come back home in the early morning hours. When I questioned him, he would say it was on official work.

Once when I got back home after visiting my sisters who lived in a different state, a friend living in the same building said my husband brought home another woman. This made me wonder about what was going on. If he had another woman in his life then why did he marry me?  He would not let me go out or make any new friends. He just wanted me to stay home all day and for some reason he kept doubting me when it was the other way around. He once called me a slut because I went to meet a female friend who wanted to go for a walk at 10 in the morning.

Things got even worse when in June his parents came to visit us. My mother-in-law treated me badly and kept blaming my mom for, according to her, not teaching me anything. They would eat together and I would get left overs, sometimes there would be none left for me. I went without food and survived with water to fill my hunger. I would be cooking all day and doing chores with no help. I was frustrated with all this going on and the way they were treating me but I still did not complain and did all the work they told me with a smile on my face.

My parents came to help with the situation, but my husband and in-laws treated me and my parents with disrespect. It made me very sad to see my parents who were trying to help, being treated badly. They were not allowed to stay with us. One day my husband told me to leave for a month so he could decide if he wanted really wanted this marriage. So, I left with my parents to visit my sister. He showed up at my sister’s, with my suitcase and told me to go back to India. I thought I could legally stay in the US.

When I got back to the apartment in Boston, I was shocked to see that he had gone through my things and most of his stuff was gone. So, I packed my belongings, dumped my clothes in a rental car and went to a hotel with my parents. For three days I struggled, not knowing what to do. I finally decided to go to the police and explained my situation, and how abusive my husband and his parents had been. An officer whom I can never forget, advised me to get a restraining order against him so I could go back to the apartment. He gave me a few options of what I could do.

I moved back into the apartment, after the cops kicked him out. Soon after, my parents left to India and I went into depression and loneliness. I had no one to talk to, I could not sleep or eat, and my health started failing. Sometimes, I would just each of piece of bread for the entire day and nothing else. I felt like my life just stopped and everything inside me was tearing apart. I would cry in my room all day, not even stepping out and my parents were very worried about me. They encouraged me to take a walk, sit by the pool and watch kids play. Anything to get me out of my depression.

But I lost interest in living life and started having suicidal thoughts. I called the National Suicide Prevention Hotline just to take out my mixed emotions. I tried to look for domestic violence organizations and found REACH. I tried to contact them, but barely anyone would help.

I continued to search for help and found Saheli. I was hesitant to ask for help. I did not know if I should just be quiet and suffer alone. I had read stories of other women and how Saheli works with domestic violence victims. So, I thought I would reach out to Saheli after I got served divorce papers.

Everyone at Saheli were so helpful and wonderful and understand my situation. This is when I met Salita ji. After talking to her, I felt like I had this fighting spirit in me which everyone had said I had, but I never believed. I chose to fight for my rights and never to give up in any situation. I decided to find a better lawyer who could advise me of my options. Fighting alone was not so easy especially when you have mixed emotions such as anger, hatred and depression. My parents flew back from India to help me fight as well. My parents were in a shocked situation and did not know who to blame whether it was me, my husband, themselves or just life in general. Things were not easy for us but we knew we had to fight and not give up and leave back to India.

Looking back at this situation now that anger in me made me realize that I am much stronger person as quoted by Freindrich Nietzsche “It is through being wounded that power grows and can, in the end, become tremendous”. My husband tried to break me in every possible way, and stalk me on social media. I am not upset about why my marriage broke because I knew that he was not the right guy for me but I was hurt by how I was treated by him and his family and I did not deserve this kind of treatment by anyone.

I am grateful to God, my parents, the police officers, Saheli advocates and other people who stood by me during my tough time. Life teaches you lesson but it is up to you if you want to fight or give up. My message to other women who are facing abuse is to get up and fight no matter who is with you but remember God is always there. It might take time to heal but I know I will heal and laugh at this at one point in the future.