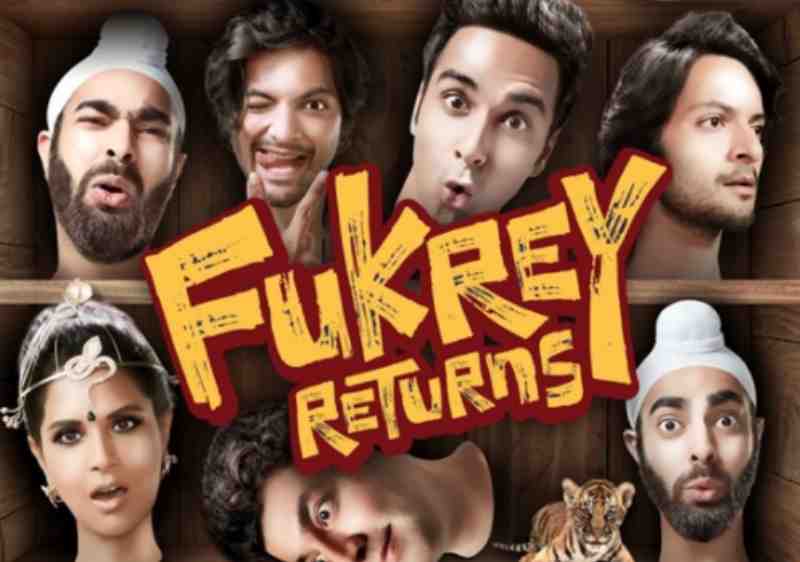 Sequels are expected to be bigger, better and ideally build on everything that made the original successful. On paper, “Fukrey Returns” boasts of everything one expects from a sequel, except that the novelty factor which actually made its predecessor popular, is missing.

For those who have not seen the 2013 released film, “Fukrey” is a genial romp about four good-for-nothing, middle-class boys in Delhi who embark upon a harebrained scheme to raise money. They do so by predominantly interpreting Choocha’s dreams, which kicks off the mess. They eventually learn that there are no shortcuts in life.

Working on the same premise, “Fukrey Returns” continues the saga from its original. Life is like usual for the quartet, Choocha dreams of romancing the local don of vices Bholi Punjaban (Richa Chadha) and yet tries to date other girls with the help of his closest pal, Hunny (Pulkit Samrat).

Hunny, who is in love with Priya (Priya Anand), assures her father that he can double investments within 24 hours. Zafar (Ali Fazal) the musician is all set to settle down with his girlfriend Neetu (Vishakha Singh). Lali (Manjot Singh), the hapless son of a sweetmeat seller, is a reluctant rebel.

Bholi Punjaban who has been in jail because of the four guys, brokers her release with the corrupt politician Babulal Bhatia. As soon as she is out of jail, she summons the four with the aim of recovering her losses from them. Instead, the four con her with Choocha’s “premonitions,” which leads them onto a treasure hunt.

While the dialogues with Delhi lingo are peppy and the characters engaging, the plot seems too farfetched. The screenplay wavers with scenes of jolly wholesome entertainment with incredibly humorous moments and moments that painfully drag. While the first half is promising, the second half is simply tedious with laughatons and the chase that seems like a marathon. By the climax, the writing is slack and predictable.

On the performance front, Varun Sharma as Choocha is the showstopper. With the plot focussing majorly on him, he brightens up the screen with his on-the-nose histrionics. He does his scenes with gay abandon. Pulkit Samrat, with no originality continues to clone Salman Khan in some scenes. Manjot Singh just happens to be around. With an underwritten role, Ali Fazal is conspicuous by his long time absence on screen.

Richa Chadha as the don Bholi Punjaban, though impressive, lacks the persona. Some of her scenes seem forced and trite. Pankaj Tripathi as Pandit, an accomplice of the quartet, is natural and plays himself. He is just another insignificant character in the drama.

Priya Anand and Vishakha Singh who play the love interest of their respective characters lack lustre and are stereotyped.

The music with some really hummable numbers, meshes smoothly into the narrative.

Overall, “Fukrey Returns” is palatable fare for those who want a deja vu of “Fukrey”. (IANS)