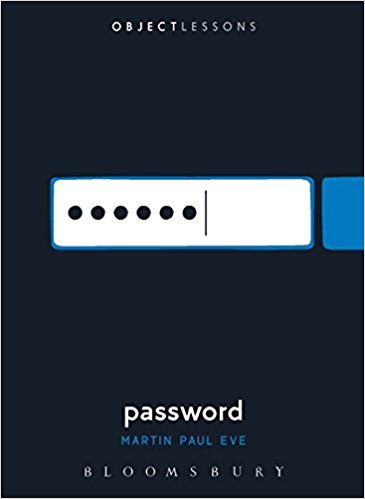 We have come far as a civilised society and with it, the way we see or do things has seen a drastic change too. Take, for instance, the measure we use to keep our secrets safe. In simpler words — the password.

While in the pre-Internet days, something as simple as “Open Sesame” would have done the trick, today even a combination of uppercase and lowercase letters, a numeral and a special character, a word that is certainly not the username, a word much different from the last three passwords and 10 million other requirements are not enough to ward off potential hackers. Whatever happened to just using your favourite sports team, best friend’s name or other memorable phrases as the password?

Since we spend a major chunk of our time on this combination of weird letters and symbols, it’s high time we talked about it and explored its increasing significance in our currently digital world. This is what Martin Paul Eve sets out to do in his book “Password” as he explores “how ‘what we know’ became ‘who we are’, revealing how the modern notion of identity has been shaped by the password”.

While Eve, Professor of Literature, Technology and Publishing at University of London’s Birkbeck College, dwells on use of passwords down history, in military, in literature — most importantly J.K.Rowling’s Harry Potter series, where passwords are used in different forms — in films and, of course, in the digital age, the important question is: What is its future?

If we were to go by dystopian sci-fi movies like “Blade Runner 2049”, the answer would be that biometrics would replace it.

Though dismissing the contention that biometrics are a plot to kill the password, Eve does agree that it’s a pretty solid way for authentication and identification. At the same time, he seeks to remind us how futile it can be, as shown in many films where a body part is removed from a dead or, in a more ghastly scenario, a still alive person to authenticate their biometrics.

Here’s what Eve suggests: “The aim is not to make a password unbreakable but rather to make it infeasible to crack a password within a meaningful timeframe.”

Meanwhile, alongside, in an interesting — but relevant — look into the ways of the Internet, the author tells us how the digital world lingo has in fact been taken from the real world.

“Hypertext websites, for instance, are ‘visited’ (they are, by their very name, ‘sites’). Online discussion functions are called chat-rooms. Indeed, a plethora of spatial metaphors has been deployed to refer to the virtualised environments, forums, spaces, places, sites, rooms and home pages in the digital world… We surf, scroll, click, enter, log in and many more.”

His aim by this digression is to stress that since the digital or virtual is not all that different from the real, it raises the question: What is someone’s identity in the digital world? And since a password is, in the most basic sense, an instrument to verify who somebody is, can unauthorised use of a password be called “identity theft” in the digital world? Read the book to find out.