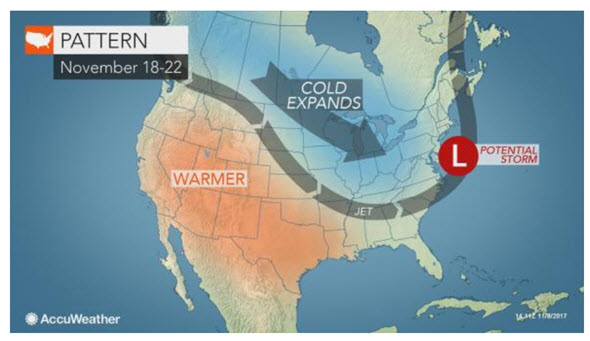 AccuWeather reports signs are pointing toward a displacement of the polar vortex that may be accompanied by a significant storm with rain, snow and wind in the northeastern United States during the days prior to Thanksgiving.

The polar vortex is a storm that typically hangs out within the Arctic Circle. Arctic air is usually locked up within the bounds of this storm.

Occasionally, this storm gets dislodged or splits into multiple parts. When this happens, arctic air can push southward to the mid-latitude regions anywhere around the globe.

“One such southward displacement of arctic air is in progress and will sweep across the Upper Midwest and Northeast into this weekend,” according to AccuWeather Lead Long-Range Meteorologist Paul Pastelok.

“A second southward displacement is possible around the days prior to Thanksgiving (Nov. 18-22),” Pastelok said.

When cold air drops southward across the Midwest and into the East, a major storm can be spawned.

The area along the Atlantic Seaboard is often a perfect breeding ground for storms in situations like this, according to AccuWeather Meteorologist Evan Duffey.

“The clash between the arriving arctic air and the warm waters of the Atlantic Ocean could help instigate a major storm several days before Thanksgiving,” Duffey said.

Such a storm can pose major travel problems should the storm grab the cold air fast enough to produce heavy snow inland and heavy rain and wind on the coast. Beginning next weekend, travel typically ramps up as some people begin to head to Thanksgiving destinations.

The magnitude and path of the cold air as well as the exact formation and track of the storm may become clear later next week.

Based on climatology, accumulating snow is much more likely to occur over the higher elevations from north and west of Interstate 95 to the Appalachians into the first part of winter. This is due to the impact of the relatively warm Atlantic Ocean.

“There is the risk for the first major snowstorm somewhere in the Northeast during the period from Saturday, Nov. 18, to Tuesday, Nov. 22,” Pastelok said.

In this case, the risk may extend to part of the Atlantic coast.

For parts of the Midwest and the Northeast, the arctic blast may bring cold air farther south than the event this weekend.

However, just like the chilly episodes that have occurred thus far this autumn, any cold shot is likely to be brief.

People with travel plans should continue to monitor the forecast leading up to Thanksgiving travel.

Regardless of the storm potential, people planning on traveling by car this Thanksgiving should make sure their vehicle is prepared for winter travel conditions. A set of tires with decent tread, new wiper blades and adequate fluids are a good start in advance of the trip.

At the very least, the pattern will be favorable for periodic snow, wintry mix and/or lake-effect snow squalls from the Upper Midwest to the interior Northeast in the days leading up to Thanksgiving.