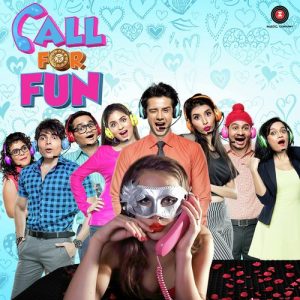 The zany song with the lyrics, “Celebrate haar ya fail” sets the ball rolling for a lively upbeat tale. The plot hinges around Yash, a young boy who takes over the mantle from his father, in his call centre business when the latter decides to travel to the US to attend his pregnant daughter’s delivery.

At the office, the young and ambitious Yash with the mantra, “jo fast hai who first hai”, makes all the wrong moves in business and ends up bankrupt. How his seven college friends come to his rescue to help him salvage the situation forms the crux of the tale.

“Call for Fun” is an anything-goes comedy that softens near the end to deliver a few knockout punches about relationship, treating the old and lonely with compassion and most of all about, not breaking ones’ trust. The messaging which comes as a barrage at the end seems staged and forced.

The sole focus of the film is perhaps to elicit laughs. It tries hard, almost too hard, to get a giggle out of the viewer, carpet bombing the audience with jokes packed with, dream and fantasy sequences, innuendoes and double-entendres.

With a run time of over two hours, the film drags unnecessarily. A few minutes into the film and the novelty factor wears off with the narrative fatigue setting in.

But it is the joie-de-vivre of the young cast that lights up the screen – Zaan Khan as Yash, Shubhangi Mehrotra as Anu, Charu Asopa as Sush, Prashant Kanaujia as Lucky, Prasad Shikre as Paddy, Swagata Naik as Katy, Priyanka Arya as Rinku and Aashish Gade as Vasu, are all competent and note-worthy. Each one in the ensemble cast portrays their character with gusto and sincerity. Linesh Fanse as Dabla Supari – the don, makes an impact with his credible performance and stands out.

Visually, the film is vibrant and bright in keeping with the genre and the frames are further enhanced by the use of quirky 2D graphics.

The music is lively and the songs are well-integrated into the narrative.

Overall, this light entertainer targeting the youth is a fun watch if you are ready to overlook the formulaic flimsy story and preachy messages. This one calls only for some fun.