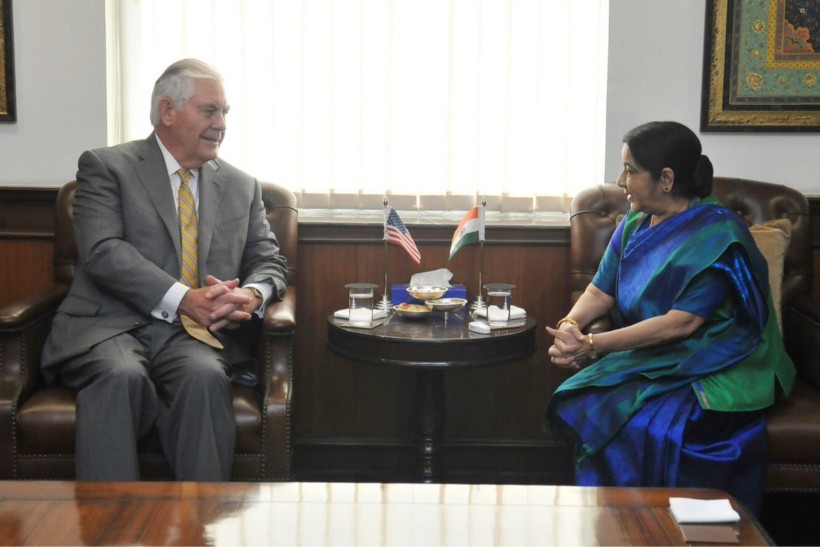 New Delhi–India on Wednesday again raised the issue of H1-B visas with the US when External Affairs Minister Sushma Swaraj met US Secretary of State Rex Tillerson here.

“We discussed the significant contributions to the US economy made by skilled Indian professionals holding H1-B and L1 visas,” Sushma Swaraj said in a joint address to the media with Tillerson.

“I have also sought cooperation from Tillerson to address the pending issues related to totalisation and urged him that the US should not do anything that will hurt Indian interests,” she said.

US President Donald Trump has called for stricter norms for issue of H1-B visas, largely availed by Indian IT firms.

A private member’s bill was introduced earlier this year in the US Congress by Democrat Zoe Lofgren seeking to increase the minimum salary of an H1-B visa holder to a whopping $130,000 from the current minimum of $60,000.

While Trump has spoken of restricting the H1-B visa system as part of his policy of putting Americans first, so far there have been no changes to it. This year, the same levels of 65,000 for general H1-B visas and 20,000 for those with advanced US degrees have been kept.

Indians get most of the H1-B visas although there are no national quotas for the facility.

Replying to a question, Sushma Swaraj said that while there had been no change made yet to the H1-B rules, if the private member’s bill in the US Congress got passed, Indian professionals would be impacted.

“H1-B rules can be changed either by an executive order (issued by the US President) or by the US Congress and we are talking to both sides,” she said.

Sushma Swaraj earlier raised the issue with Tillerson at a meeting on the sidelines of the UN General Assembly session last month.

She also red-flagged it this month at a meeting with a visiting US Congressional delegation from the House Committee on Science, Space and Technology. (IANS)