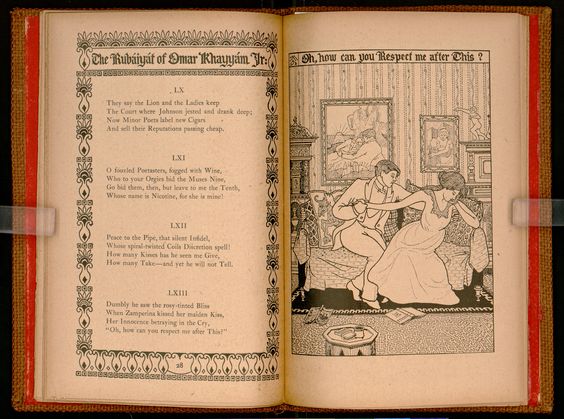 If imitation is the sincerest form of flattery, even in literature, then what about parody? We can call it ingenious imitation though deft adaptation or skillful improvisation would be more apt, and it can either mock the original but even exalt it by proving its relevance in a different time and space.

As a raft of Americans humourists did with Omar Khayyam’s “Rubaiyat”.

The quatrains on life and fate and the former’s transience and the latter’s fickleness were instead used to portray a popular card game and its enthusiasts, the Prohibition, a pungent take on publishing among others.

But the 11th century Persian polymath’s most-known work had a curious history, becoming famous from its rather ornate English translation by Victorian litterateur Edward Fitzgerald, who however admitted it wasn’t a faithful rendition.

But while his ‘translations’ – five versions eventually – went on to influence Agatha Christie, Daphne du Maurier, O.Henry, Eugene O’Neill, Jorge Luis Borges, Stephen King, Harivansh Rai Bachchan and Paramhansa Yogananda, while also re-introducing the work to the poet’s native Iran, where Khayyam was known more as an astronomer and mathematician, it also inspired a series of parodies.

The pioneer was Rudyard Kipling, who in his “Rupaiyat of Omar Kalvin” (in “Departmental Ditties”, 1886) mocked the budget proposals of Sir Auckland Colvin, then Financial Member of the Viceroy of India’s Council. Take “Now the New Year, reviving last Year’s Debt,/The Thoughtful Fisher casteth wide his Net;/So I with begging Dish and ready Tongue/Assail all Men for all that I can get.”

But it was the Americans who made it a tradition, beginning with Carolyn Wells (1862-1942), who in “The Rubaiyat of Bridge”, used it to spoof its rules and players.

“Ah, make the Most of what We yet may Take,/Before we lose the Lead, and let Them make/Trick after trick! While we throw down High Cards,/Sans Lead, sans Score, sans Honor, and sans Stake!” or “I sometimes think there’s never such Tirade/As where some Bridge Game has been badly Played/When Some One thinks you should have made no Trump,/And you have thriftily declared a Spade!”

Then J.L. Duff, in “The Rubaiyat of Ohow Dryyam” (read the name of the poet slowly), offers an elegy for the death of alcohol due to prohibition. “Wail! For the Law has scattered into flight/Those Drinks that were our sometime dear delight;/And still the Morals-tinkers plot and plan/New, sterner, stricter Statues to indite”, it begins.

Then there is another plaint: “After the phantom of our Freedom died/ Methought a Voice within the Tavern cried:/’Drink coffee, Lads, for that is all that’s left/Since our Land of the Free is washed — and dried'”.

Foreshadowing the social media fascination with cats, Oliver Herford in “The Rubaiyat of A Persian Kitten” (1904), used similar tropes of feline disdain and yen for comfort.

Take: “The Early Bird has gone, and with him ta’en/The Early Worm—Alas! the Moral’s plain,/O Senseless Worm! Thus, thus we are repaid/For Early Rising—I shall doze again” or even “They say the Lion and the Lizard Keep/The Courts where Jamshyd gloried and drank deep/The Lion is my cousin; I don’t know/Who Jamshyd is-nor shall it break my sleep”.

“The Rubaiyat of Omar Cayenne” (1904) is a peppery look at book writing and publishing industry of his day by artist, critic and author Gelett Burgess (1866-1951) – “Ah, make the most of what we yet may do,/Before our Royalties have vanish’d, too,/Book after Book, and under Book to lie,/Sans Page, sans Cover, Reader—or Review!” and more.

Wallace Irwin went the furthest with “The Rubaiyat of Omar Khayyam, Jr.”, which deals with the poet’s early years, his success after emigrating to Borneo, his death while surrounded by his beloved tobacco – and also his misogyny: “Come, fill the Pipe, and in the Fire of Spring/The Cuban Leaves upon the Embers fling,/That in its Incense I may sermonize/On Woman’s Ways and all that sort of Thing.”

Painstakingly introduced (where we learn that “where the philosophy of the elder Omar was bacchanalian and epicurean, that of the Son was tobacchanalian and eclectic”) and well-annotated by Irwin, it is the most ambitiously extensive of all, and of great appeal to smokers.

Alas, the skill of parodies doesn’t seem to be as thriving now. (IANS)