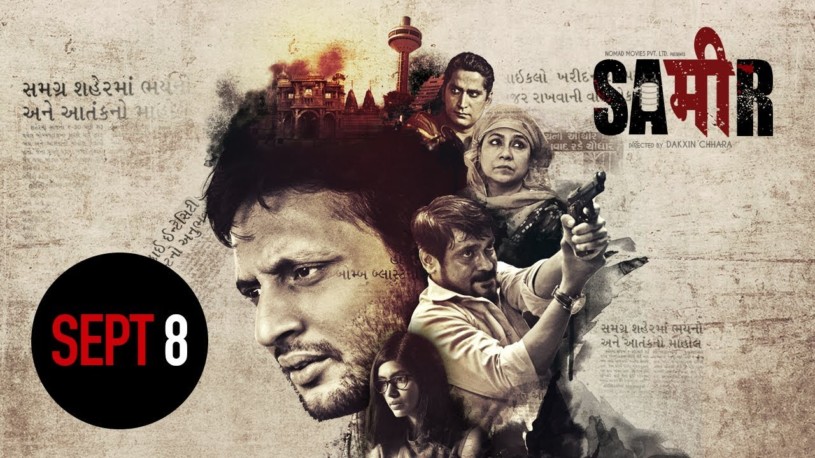 “Sameer” is a cleverly crafted but one-dimensional political drama that involves terrorism. It is a fictionalised film based on true incidents.

Set in the backdrop of the bomb blasts in the country, Mohammed Zeeshan Ayyub plays Sameer, an engineering student who is caught between the Anti-Terrorist Squad (ATS) and the terrorists.

After a bomb explosion in Hyderadad, the ATS is hunting for Yaseen Darzi, the Ahmedabad-based suspect responsible for the blast. Since they cannot lay their hands on him at the hostel, they pick up his room-mate Sameer instead. They force him to penetrate the terrorist lines as an under-cover so that they may reach Yaseen.

How Sameer manipulates both the ATS and the terrorists, forms the crux of the tale.

Designed as an engaging thriller, the film is astutely mounted by director Dakxin Chhara. With measured enthusiasm, he keeps you glued to Sameer’s tale to a point where you actually feel pity for the character. It is only in the third act that you realise the story hits a predictable note and the denouement further makes the entire plot seem ridiculously shallow.

The film tries to put some very important points across, subtly. Some, especially about anti-terrorism discussed between Yaseen’s mother and her other son Shaheed, hit the right note. Whereas others about living in harmony, designed as street performances by the street performer Manto, seem forced and are lost, as they fail to make an impact.

Zeeshan Ayyub is a skilled actor and he plays Sameer convincingly. He portrays the attitude, arrogance and helplessness of his character with sincerity.

Anjali Patil as the broadcast journalist Alia Iradi, is short-changed by an ineffective screenplay. While her character is well-established, there are hardly any scenes which reflect her expertise as a professional journalist. Instead, her personal equation with the ATS Chief Vikram Desai takes centre stage.

Seema Biswas as Yaseen’s mother, also known as “Tiffinwali Khaala”, plays her part honestly. It is touching to see her give a cold shoulder to her son Shaheed and later emotionally tell him off for his wrong doings.

Master Shubham Bajrange, as the autistic orphan Rocket, tugs an emotional chord with his performance.

Among the supporting cast, Chinmay Mandlekar as the steely Shaheed, Alok Gagdekar as Manto and Subrat Dutta as ATS Chief Desai, deliver competent performances. They have their moments of onscreen glory.

Technically, the film is well-mounted. With excellent production design, every frame is realistic. The indoor shots are atmospheric and well-captured by cinematographer Gargey Trivedi’s lens. His camera movements too are smooth and elegant.

Overall, Sameer opens with a bang but peters out with a whimper. (IANS)