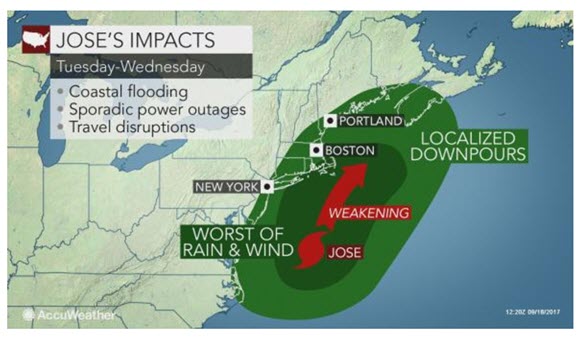 AccuWeather reports Hurricane Jose will bring coastal flooding, beach erosion, gusty winds and rain to the mid-Atlantic and New England coasts much of this week.

Jose, currently a Category 1 hurricane, is expected to pass within 200 hundred miles of the coast on its closest approach around midweek. By this point, Jose will either remain at minimal-hurricane intensity, weaken to a tropical storm or become a sub-tropical system.

The possibility remains for Jose to make landfall in southeastern New England, depending on how quickly the storm turns to the northeast. 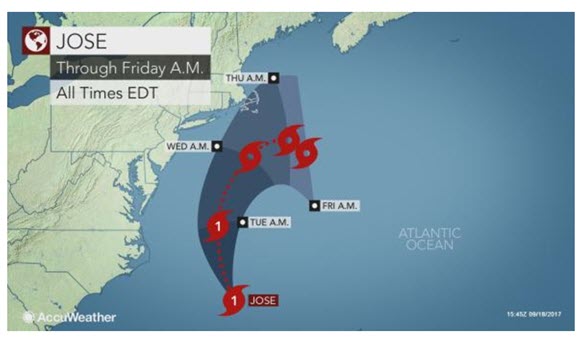 “Although Jose will generally pass offshore of much of the East Coast, a landfall can still not be ruled out as Jose makes its closest pass to the United States,” AccuWeather Senior Meteorologist Dan Pydynowski said.

Eastern Long Island and southeastern New England would be at greatest risk for landfall should it occur.

Regardless, Jose’s anticipated track will bring the most significant impacts along and just east of the Northeast Interstate 95 corridor.

“A hurricane does not need to make landfall to cause significant adverse effects in the Northeast, since the shape of the coast tends to enhance storm effects and trap ocean water,” AccuWeather Senior Meteorologist Alex Sosnowski said.

“The slow-moving and lingering nature of Jose will lead to prolonged impact on beach communities and offshore interests.”

Areas from the Outer Banks of North Carolina to Maine can expect rough surf to continue to pound the coast as Jose churns waters offshore. Extensive beach erosion is likely. Intense rip currents and large waves will endanger anyone who ventures into the water. 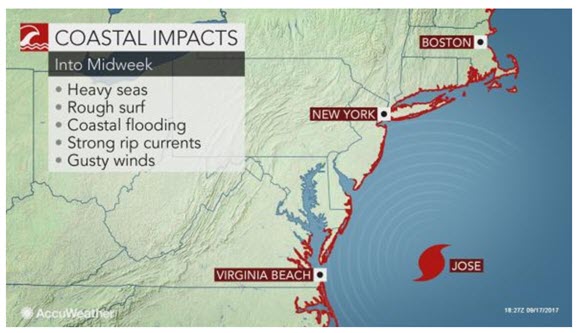 The winds around Jose will push a large amount of water toward the mid-Atlantic and New England coast, leading to flooding at times of high tide.

“With the new moon phase early this week, tide levels are higher than most of the rest of the month,” Sosnowski said. “Jose may push tides to 1-3 feet above-published levels.”

Areas along the western end of Long Island Sound may be vulnerable to coastal flooding in this situation.

Water that gets pushed into the back bays in New Jersey and Delaware during the first part of this week may slosh toward the western side of the barrier islands late in the week.

“In addition, Jose will likely come close enough to the coast to cause a period of rain and gusty winds from the Delmarva Peninsula northward into New England from Tuesday into Wednesday,” Pydynowski said.

The heaviest rain is likely to fall on southeastern New England and eastern Long Island from Tuesday to Thursday. However, some rain will reach New York City and Portland, Maine with spotty showers as far west as Philadelphia and Norfolk, Virginia.

Winds gusting between 40-60 mph could lead to sporadic power outages and tree damage across far eastern Long Island and southeastern New England. Should Jose track closer to the coast and/or make landfall, gusts to 75 mph are possible, especially across Cape Cod, Nantucket and Martha’s Vineyard. 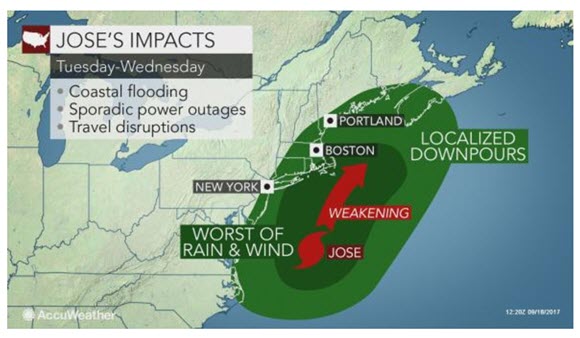 Airline and local roadway travel delays are likely. Some outdoor sporting events may need to be rescheduled.

The northwestern extent of the worst rain and wind will ultimately be determined by Jose’s exact track. A track farther to the west would throw clouds, rain and wind farther inland than currently anticipated.

Heavy seas will linger offshore through this week. Offshore swells will average 15-25 feet, but can be locally higher into Wednesday.

Elsewhere in the Atlantic, Lee and Maria joined Jose in the basin on Saturday.

Those along the United States Gulf and East coasts should closely monitor the progress of Maria for any possible impacts during the last week of September.

The tropical Atlantic is likely to remain active through much of October and into nearly the end of autumn.