Mumbai–Bollywood megastar Amitabh Bachchan says he handles his social media activity himself contrary to what others assume.

“There is no substitute to personal attention and care … none … long may this survive,” the 74-year-old posted on his blog.

“Many wonder and ask how many personnel ‘deployed’ by me for my social media activity… hehehe… None… all done personally,” he added.

Narrating why he chose to make the clarification, he said: “Someone was somewhat cryptic and in deep sarcasm, the other day, when they received a birthday greeting from me, in a text never used before and raised an accusing finger… ‘You have been caught AB. Your secretary messed up in the greetings you sent… You have never addressed me thus… haha caught you’.”

“No, my dear, all that goes out to social media is done at this time of the night and by my own hands… err… fingers,” Big B wrote in the blog entry, posted online at 12:41 a.m. on Sunday.

“It was absolutely wonderful to work with Rajesh sir. He is such an amazing actor and a very lovely person,” Shraddha said in a statement.

“Rajesh-ji was a perfect fit for the role of a lawyer… I think he is a fantastic actor and has brought a new twist to the character, his methods are superb and he does his homework well before he comes to set. It was my luck that I got to meet him and hope we work a lot in the future,” Lakhia said.

Humbled by all this, Rajesh said: “I wish to work with them in future too. I am thankful that they loved working with me.”

“Haseena Parkar” is based on underworld don Dawood Ibrahim’s sister Haseena, played by Shraddha. It will release on September 22.

Actor Puru Chibber feels blessed that filmmaker Omung Kumar had faith in his craft and roped him for “Bhoomi”.

“Acting in ‘Bhoomi’ was a responsibility for me as Omung sir trusted me and had faith in me. I have known him for long. I have known him since the time I used to assist Sanjay sir (Sanjay Leela Bhansali) for ‘Saawariya’,” Puru said in a statement.

“I’m thankful to Sandeep (Singh) sir and Omung sir for giving me a chance to work with a brilliant team and super star Sanjay Dutt,” he added.

“Bhoomi” marks Sanjay’s comeback after he was released from the Yerwada Central Jail in Pune in 2016. It is an emotional and sensitive revenge drama that explores the relationship between a father and daughter. It also stars Shekhar Kapur and Aditi Rao Hydari, and will release on September 22.

J.D. Majethia, maker of “Khichdi: The Movie”, reminisced about the time when the cast and crew of the film celebrated its anniversary with Prime Minister Narendera Modi.

The 2010 release was directed by Aatish Kapadia. “Khichdi: The Movie” was the first film in Hindi cinema which was adapted into a television series.

The film featured Anang Desai, Supriya Pathak, Rajeev Mehta, Nimisha Vakharia and Jamnadas Majethia in lead roles. The film was based on the TV shows “Khichdi” and “Instant Khichdi”.

On Sunday, Majethia tweeted an image of the whole cast and crew with Modi and captioned it: “‘Khichdi’ anniversary, ‘Khichdi: The Movie’ premier moments with Modi sir.”

Mumbai–Actor Annup Sonii has been roped in for the role of a Colonel in Nagesh Kukunoor’s web series “The Test Case”. He says his character is very “interesting and colourful”. 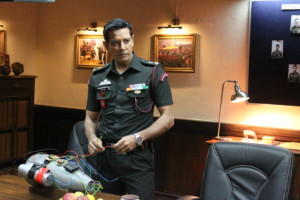 “My character enters the story at a very crucial point with a special purpose. On the first impression, you may feel he’s just an investigative officer, but there’s a variety to the character,” Annup said in a statement.

“He gets into the psyche of the person he’s investigating and interrogating. That makes the character all the more interesting and colourful,” he added.

“The Test Case”, produced by Endemol Shine India for ALTBalaji app, is set against the backdrop of the Indian Army. Nimrat Kaur essays the role of Captain Shikha Singh, the first woman preparing to be inducted in a combat role in the Indian Army. The narrative revolves around the life of Shikha and the hardships she faced during the training.