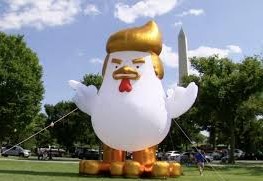 Washington– An Indian origin activist placed a giant inflatable rooster bearing a striking resemblance to President Donald Trump near the White House to protest his “weak” and “ineffective” leadership.

Taran Singh Brar, a documentary filmmaker, installed the 30-foot “Chicken Don” balloon between the official residence of the US President and the famous Washington Monument on Wednesday, Washington Examiner reported.

A USA Today report cited Brar as saying that he obtained all necessary permits for the installation from the National Parks Service and the US Secret Service. The angry-looking chicken has golden-orange hair and hand gestures in Trump’s style.

“We are out here to criticise our President for being weak and ineffective as a leader,” Brar said in the footage posted on Twitter, adding that Trump also “seems afraid” to release his tax returns.

“He seems afraid to stand up to (Russian President Vladimir) Putin and now he’s playing a game of chicken with North Korea. Yet he wants a military parade in DC. It’s all incongruous, and we are here to make fun of him for that,” Brar said.

The inflatable’s arrival divided opinion on the social media, with Twitter users at odds over whether the stunt was “pathetic” or “cute”.

The topic quickly gained momentum and the hashtag #TrumpChicken was trending in the US on Wednesday.

“Not a comment on Trump or his presidency, but I just kind of love the inflatable chicken w/Trump hair. It is really cute!” wrote one user on Twitter.

Former Amazon executive charged with insider trading in US

Sikh man assaulted in England, asked if he was Taliban

We must build people’s trust in technology: Satya Nadella

Sikh man assaulted in England, asked if he was Taliban