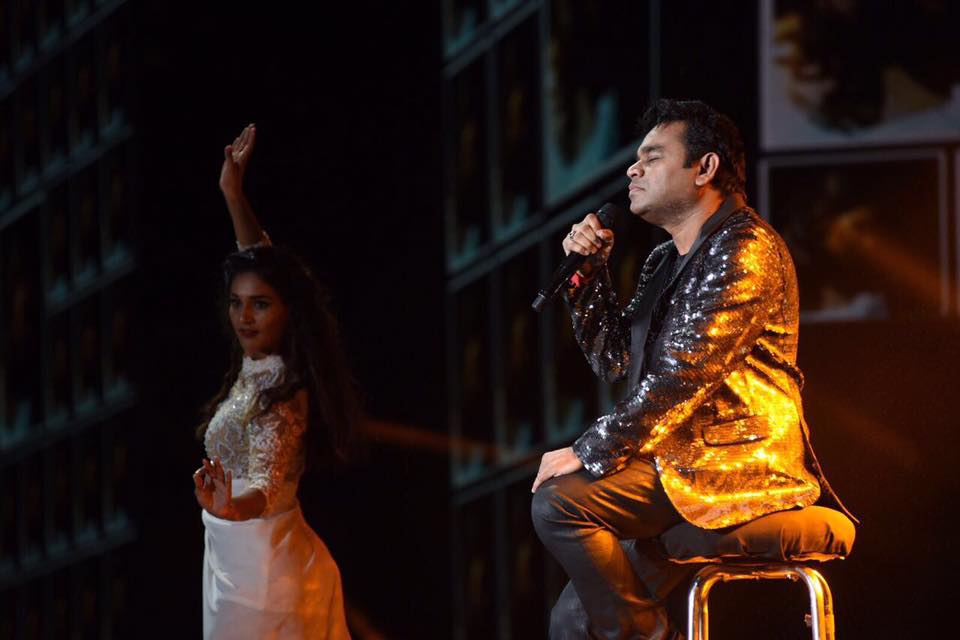 New York–It was an encore all the way for A.R. Rahman as he performed the original Tamil version of his “Urvasi Urvasi” chartbuster for the IIFA Rocks audience here as he celebrated his 25-year journey in the Indian film industry with a two-hour concert.

The scenario at the MetLife Stadium in New Jersey was far removed from his July 8 London concert where fans reportedly walked away complaining that his performance was dominated by Tamil instead of Hindi songs.

“Once more, once more,” shouted out the fans at the MetLife Stadium, even as the clock struck 2 a.m. here on Saturday morning.

The audience joined in as an ensemble of singers including Hariharan, Kailash Kher, Jonita Gandhi, Benny Dayal, Mika Singh and Neeti Mohan jammed it up with the music maestro on stage.

With a list of songs largely dominated by Hindi tracks, Rahman also sang around three to four numbers in his mother tongue, and the audience wasn’t complaining.

“Rahman’s performance was every bit worth it. We had no problems that he sang in Tamil because we believe one should preserve their culture,” Rajan Panda, who has been staying in New York for 30 years, told IANS here.

A Nepalese couple that has been staying here for the last 15 years also said language can never be a barrier in music.

“We enjoyed the show very much. We came for Rahman. It’s music, it’s universal… It doesn’t matter what language it is in,” Arjun Awaley, a software engineer, told IANS after the show.

Rahman kept saying “I love you friends” and “Love you too” to the crowd that swayed to, clapped to and even danced to his tracks.

Even the rain which came pouring down right before Rahman took the stage — and mid-performance too — didn’t make fans go away here.

In a silver sequinned jacket, the Mozart of Madras, who started his film career with “Roja” back in 1992, took over the stage.

The crescendo came with “Jai ho”, which had won Rahman an Oscar for the Best Original Song in 2009.

In the prelude to the culminating performance by Rahman, singers Kamaal Khan and Diljit Dosanjh took the stage to belt out popular numbers and got the audience grooving.

All in all, IIFA Rocks rocked with the music, but more so once Rahman was on stage.

The event was a part of the ongoing Bollywood extravaganza — the 18th edition of the International Indian Film Academy (IIFA) Weekend and Awards — which will end with the final awards ceremony at the MetLife Stadium on Saturday evening.