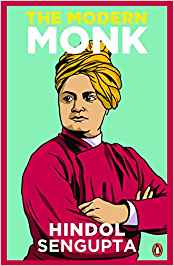 It is not easy to write appealingly on someone who has been a subject of endless books. Yet, Hindol Sengupta manages to weave a powerful profile of Swami Vivekananda, one which neatly blends the divine nature of the celebrated Hindu monk-philosopher with the simple human he was, one who richly contributed to Hindu spirituality even as he battled poverty in personal life.

Vivekananda was no traditional monk, one seeped in rituals and happy to spend a secluded life in the search for self-realisation. He questioned, he debated, he sought proof and he shunned mindless rituals. He wasn’t satisfied just by the acclaim that followed his seminal Chicago address of 1893. Little did he know then that his appeal would lay the foundation for the US to better understand the Hindu religion and, much later, embrace Yoga.

Vivekananda was also a man of contradictions. He had lust for life, yet a simultaneous detachment for the idea of a long life. A relentless traveller, he also craved for stillness. Having addressed large crowds so often, he sought a home far away from the madding crowds. Having walked the dusty plains for years, he craved for the hills. And for a spiritual renunciate, he constantly worried about his family and the money it needed to sustain itself.

Sengupta tells us of the rational man who was never shy of placing on record the abysmal, debilitating poverty of India. “The problem with our understanding of Vivekananda today is that we always choose to ignore the down-to-earth, practical man by focusing too much on his godliness.”

Vivekananda may be a poster boy for Hindu nationalists but the monk himself had no hatred for any religion. If anything, he was an admirer of Jesus Christ. He was known to carry with him “The Imitation of Christ”, a devotional book from the 15th century. “Keep close to Christ if you want salvation; He is higher than any god you can imagine,” he once said.

True, without Ramakrishna, Vivekananda would have remained at best a highly erudite philosopher. But without Vivekananda, Sengupta points out, and so correctly, the name, legend and work of Ramakrishna would never have spread across the world. Meeting Ramakrishna of course irrevocably changed Vivekananda’s life. But their interaction also completed, Sengupta says, the Bengal Renaissance.

Vivekananda was convinced that in order to change the world, he must first change India. If the immortal message of Hindus had to be taken to the world, then the sloth and malice he saw among the Hindus must first be uprooted. For the young author, Vivekananda’s importance is as an antidote to mindless nationalism. (IANS)