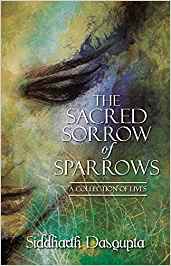 New Delhi– What is the best way to relive an unforgettable past? Perhaps, cherishing the old memories. And this recent collection of short stories is an apt reminder of the impact that memories tend to have on our lives.

Whether good or bad, memories are realities that can never be hidden, even if you close your eyes in an attempt to ignore and forget.

“The Sacred Sorrow of Sparrows” by Siddharth Dasgupta (Price: Rs. 395; Pages: 253; Publisher: Niyogi Books) is a collection of short stories, throwing light on such notes, as the writer provides metaphorical references to the ‘Sparrows’ in comparison to the various characters in the book who are ‘bound by the fluttering of human heart’ altogether at the same point of time, across cities and boundaries.

This fluttering is markedly under an illusion of one large flock filling the skies with bizarre patterns. Along with an unrestrained hunger to seek and to explain, they actually form the tiniest of dots on the ‘tiniest square piece of imaginable sky.

The author has inculcated different narratives through monologues and conversations of various people and how their lives have been affected in the present scenario, especially by reminiscence of some previous incidents. Irrespective of their age, the protagonists in the series of ten different plots, are portrayed in a similar fashion of endowing one universal emotion of sorrow.

“They’re the fabric of life in a sense — binding, layering, and texturing all the people and places we’ve known, serving as harbingers for the places and people we’ve yet to know,” the author told IANS in an email interview.

The stories are not intended to be sad, but a consistent longing for the melancholy is painted throughout its pages to shape the future of the characters. All the characters oscillate between their memories and the present, as the idea of space and boundaries cease to exist.

From the Bosphorus to the resounding refrain of the qawwali, the quiet streets of Isfahan to a crowded city in Japan, two lovers fraught with desire in Bombay to one man’s spiritual awakening in Lebanon.

“The book is an examination into melancholy and its often clandestine tentacles that are often left unexplored. Perhaps it’s been a journey by which I’ve attempted to deepen my understanding of life and the world at large, this whole carousel of witnessing human faith through the eyes of others. Everything has sort of stemmed from that,” Dasgupta says.

The innumerable characters are not entirely fictional. Some of the characters have been sketches of people close to the author in real life, while the others are amalgamations and collages and patched-together fragments and imaginings of several people.

“All this has occurred in an organic manner; thus, some of the incidents in here too carry the essence of something I’ve come across at a certain point in time,” he says.

The writer resolved to explore and experience the horizons of the universe when he grew up. He appears to have come good on that promise. This book leaves a simple message in the minds of its many readers, that after all forms of digital and virtual reality hype dies down, one is left only with the words, especially encompassed with passion and truthfulness. (IANS)