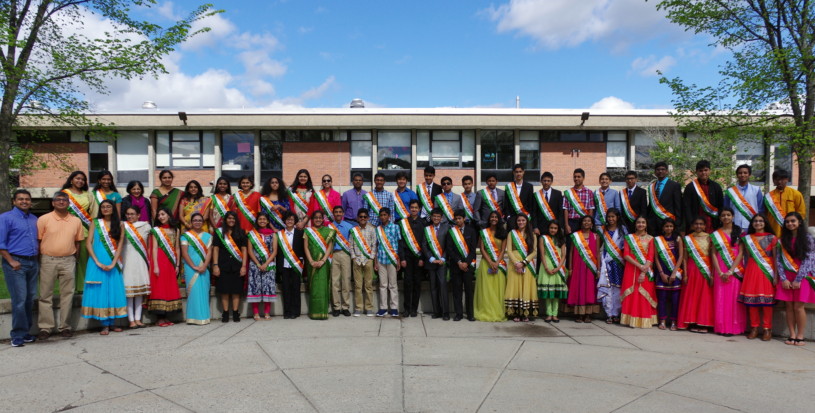 LEXINGTON, MA– Shishu Bharati held its 29th annual graduation ceremony this month and graduated 52 students. It was the largest graduating class in the school’s history.

The day began with a museum-style display of language projects set up on tables lined with colorful tablecloths and decorated with graduation balloons. In the wee hours of morning (yes, at 8:30 am on a Sunday morning), the 8th graders excitedly explained projects that represented the culmination of nearly nine years of hard work and effort.

Beyond demonstrating excellent proficiency in the language of their choice, the soon-to-be graduates exhibited a remarkable sense of creativity, showcasing their achievements in a variety of ways including through an explanation of Kaun Banega Crorepati, a translation of the ubiquitous classic If You Give a Mouse a Cookie, and even a video demonstrating how to make chana masala in Hindi. Moreover, the display area featured a table with several copies of a book containing the final graduation essays in each of the students’ respective languages.

After an hour and a half of viewing, the ceremony moved to the auditorium, where the podium was decorated in the colors of the Indian flag and the numerous colorful balloons lined the stage. The ceremony was emceed, by former graduate Ritika Neti (Class of 2014), a dedicated student and volunteer within the Shishu Bharati community. The graduation officially began with beautiful renditions of both the Indian and the American national anthems performed by the Shishu Bharati Alumni Band.

The President of Shishu Bharati, Seshi Sompuram, thanked all the volunteers for their dedication in making Shishu Bharati an outstanding Institution and preparing ambassadors of Indian heritage. Then he took the opportunity to offer his hearty congratulations to the graduating class of 2017. He also congratulated the first batch of 31-student volunteers, who received the United States “Presidential Volunteer Service Award”. He reminded the graduating class that many of the Universities are recognizing Shishu Bharati’s languages and waving the languages requirements.

Ms. Sipra Shah, a member of the long standing team of volunteers of Shishu Bharati and was a teacher as well as the principal of Shishu Bharati for past 35 years , was then honored with the Lifetime Achievement Award for her efforts over the past 35 years to make Shishu Bharati the successful organization that it is today. In fact, Shishu Bharati has evolved since its founding over 39 years to become a well-established organization whose mission is to promote and foster a sense of Indian identity in Indian-American students by way of Indian language and culture classes, all of which are taught by several dedicated volunteers. The dynamic duo, Mr. Kirit Upadhyaya and Ms Rekha Upadhyaya were also honored for their long dedicated service to Shishu Bharati.

Mr. Raja Chilakamarri, Vice Principal of Languages from Walpole location, spoke for Mrs. Renu Tewarie, Principal for the location.  Raja stressed the need to retain ones won culture and identity in the society.  Shishu Bharati education provides the means and tools required to retain ones identity.  Raja mentioned who Walpole location is unique by offering Sanskrit as language and grammar for adults.  Raja ended his speech with congratulating the graduates of the class of 2017.

Shortly afterwards, Mr. Jay Pandit, the principal of Shishu Bharati for Nashua location offered his own congratulations and wisdom to the Class of 2017 as he reflected upon his own journey and experiences as a member of the Shishu Bharati community, the mentoring he received from Ms. Sipra Shah and other leaders, and the importance of striving to reduce cultural conflict, something that, because of its modern-day relevance, resonated with both the students and the audience.

After Mr. Jay Pandit’s eloquent speech, Ms. Sipra Shah took the podium for the last time as the long standing principal of Shishu Bharati. In an emotional and moving speech, Mrs. Shah described the pleasure of seeing youth mature and grow up over the course of their time at Shishu Bharati and the sense of personal satisfaction she’s acquired as a result of teaching at Shishu Bharati. Though this was her last day as principal, Mrs. Shah made a point to say that this is by no means the end of her Shishu Bharati experience, and that she will continue to come regularly.

The ceremony also featured Paromita Shah, Assoc. Director at National Immigration Project (National Lawyer’s Guild), a Shishu Bharati Alumni and happened to be Ms. Sipra Shah’s daughter. She reminisced upon her experiences as a member of the first graduating class at Shishu Bharati and emphasized the idea that Shishu Bharati has been an enormous group project, the product of several individuals working together. She rejoiced the fond memories and how Shishu Bharati added another dimension to her life.

Dr. Manish Shah, Assoc. Director, Cardiac Arrhythmia Research and Asst. Prof. of Medicine, Georgetown University School of Medicine, a Shishu Bharati Alumni and a member of the first graduating class, who also happened to be Ms. Sipra Shah’s son, then took the opportunity to not only congratulate the Class of 2017 graduates, but to highlight the uniqueness of Shishu Bharati and its mission, not just in Massachusetts, but across the entire country.

Finally, Aditi Patil, also a former student at Shishu Bharati and now a major in international affairs at George Washington University, added a fresh perspective to the mix of nostalgic memories by emphasizing the notion that India is a remarkable exception. In spite of the technical definition of a country as a state composed of homogenous peoples, India is a nation in which starkly diverse peoples coexist, something that attests to the success of diversity and tolerance in the face of the hatred consuming America today.

The speeches all culminated with the graduation itself, during which each student received a plaque, among other gifts, in recognition of several years of hard work put in and knowledge absorbed. The Shishu Bharati leadership also announced the start of the Shishu Bharati alumni program to sustain a dedicated community well into adulthood and encouraged each of the graduates to volunteer and to play a role in creating in the same experience they lived through while at Shishu Bharati.

At the end of the festivities, the graduates and their family and friends gathered in the cafeteria to enjoy a delicious Indian lunch including mouthwatering chana masala, rice, and, to finish the meal and the celebration, a sweet jamun. In spite of the many early Sundays, itchy Indian dresses, and additional homework, that final sweetness and sense of satisfaction made it clear that every minute of the experience was absolutely worth it and would cherish in years to come.