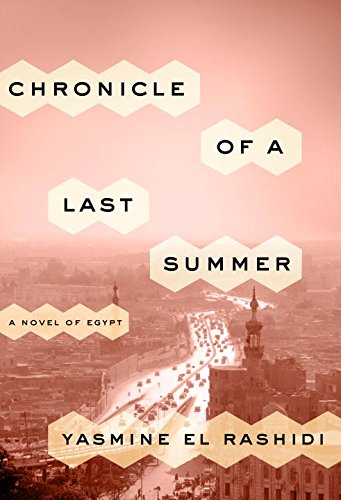 Volcanic emotions contribute to, and are further generated, during turbulent times in human affairs as manifested in revolutions or other such instances of rapid change. But how dis these grow to the critical levels necessary to trigger such upheavals, say, in stagnant, repressive societies like Middle East’s long-established autocracies, during the Arab Spring?

And what was it like before the protests ballooned or after the promises held out by these events fizzled out unrealised?

Egyptian author Yasmine el Rashidi seeks to give us an answer in her debut novel, through the eyes and thoughts of an unnamed woman at three key stages of her life.

It begins with the narrator as a school student in 1984 struggling to make sense of the flux in her life with the disappearance of her father, fast-forwards to 1998 when she is an university student studying filmmaking and can observe society at a time through a lens when the threat of jihadi terror has cropped up while people are developing aspirations and are getting restless.

Her odyssey finally ends in 2014, at the end of a watershed era when hopes for a better future rose as it finally seemed within reach, were subverted and then ignominiously dashed with the country seemingly wrenched back into the past it had long been trying to escape.

Even her father’s return offers no consolation as the narrator understands that while there is no guarantee of a better period soon, while the older time cannot offer any more solace after the brief flowering of better possibilities and more freedom.

Mixing the coming-of-age genre with key insights into society and politics in Egypt, the unforgettable, nuanced picture of a country deemed a trailblazer for the Middle East but itself conflicted over its complex heritage, is brought to life by the frequently powerless character at its centre.

Rashidi, a regular contributor to The New York Review of Books, and an editor of Middle East arts and culture quarterly Bidoun, draws in the reader to the atmosphere she skilllfully fashions.

Be it an otherwise serene home where comfort has to contend with questions about unexplained absence of inmates, of a school where irrelevant history is being taught and a student’s background determines how they will be treated, simple pleasures after school, the rumble-tumble of the markets where venal policemen target those who cannot fight back, the planned chaos of a government office, crowded bus rides, trying to politely send off a child vendor… the simple but evocative prose makes you feel all the uncertainty, indignation, frustration, heat and even pain, shock and despair.

Alongside there are discussions on the legacy of Gamal Abdel Nasser, presented as opinions of the narrator’s favourite cousin and of an “uncle”, as well of the contributions of Anwar El-Sadat, and then the long, stultifying rule of Hosni Mubarak, as well as examinations of what drew or repelled her countrymen to the Muslim Brotherhood and more.

But as she mentions, in one of the book’s most key passages — relevant far beyond her country and region — the burgeoning 24/7 TV channels “where montages have escalated into dramatics”, and where if they are not featuring the nation’s current leader, “it would be terror”.

One key part is when the narrator’s “uncle” tells her “commonplace” happenings that may indicate approaching tumult when she confesses her disquiet to him.

She is told to watch for “certain things” — the prices of simple, staple vegetables, if the bread-delivery man is whistling as he cycles down the street or, if people are watching TV at cafes, or sitting in silence, or debating, or if the radio begins to play repeated patriotic songs.

And how do dashed hopes affect the people? As the narrator’s now-jailed cousin tells her that his changed appearance is “what happens when you wait each day without knowing what you are waiting for”.

The Arab Spring’s impact on political realities may been may have been transitory or unexpected in most cases but it did affect the people — for good or bad — and this is one of its most heart-tugging stories. (IANS)