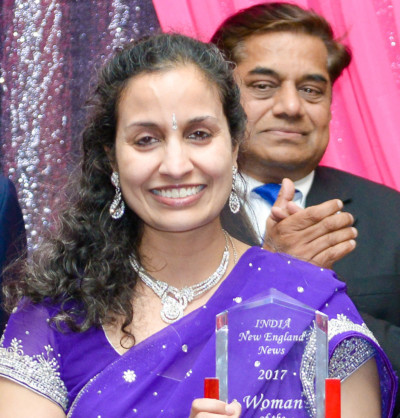 BURLINGTON, MA—Manisha Bhatt, who was crowned Woman of the Year 2017 by INDIA New England News on Friday, says this award strengthens her dedication to public service.

“Receiving this award just strengthens my dedication to public service and motivates me to be a person who can always live up to the title “Woman of the Year”- not just for 2017, but for the rest of my life,” Bhatt told INDIA New England News.

An independent panel of seven judges named Bhatt Woman of the Year 2017 for demonstrating how law can be used to create “hope and spirit to elevate all of us” at the Woman of the Year Awards gala on at Burlington Marriott Hotel in Burlington, MA. About 500 people, including entrepreneurs, philanthropists, social activists and community leaders attended the ceremony.

“I was truly honored to receive this award, especially in light of all of the accomplishments of my fellow nominees.   I was shocked when I heard my name announced and I was immediately overcome with emotion,” said Bhatt.  “I felt very grateful.”