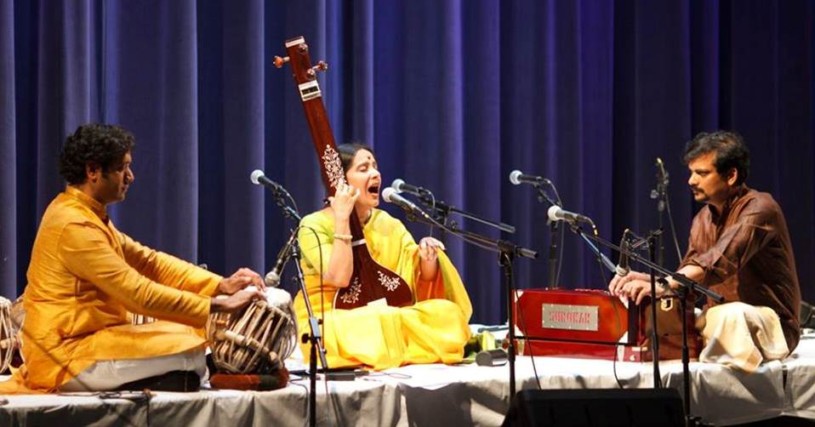 LEXINGTON, MA–Many colors of Indian classical music came alive at the Raga-Rang concert on April 29th at the Scottish Rite Museum in Lexington. Melodies based on hindustani classical raga’s along with traditional classical compositions resonated at this Meru Education Foundation production. Until a couple of weeks earlier, I had been immersed in organizing the Learnquest Music Conference, so this was my chance to soak in music.

A special treat at this 5th edition of Raga-Rang was the presence of guest artist, Dr. Subhadra Desai, a scholar-singer from India, who regaled the audience with a melodious khyal in Raga Megh followed by a ‘Tappa’ in Raga Kafi where her tankari and wizardry lit up the full-house in attendance. Her guidance to the Raga-Rang team and their hard work was visible in many compositions to follow.

The program was strung together as a musical celebration of nature through the cycle of creation, manifestation, and transcendence.  The vocalists from New England area Shuchita Rao, Aditya Rohit, Meena Sundaram, Sankar Gangaikondan, Shekhar Shastri, Shubhra Bhattacharya Chandra, and Vijay Kumar kept the audience wanting for more. 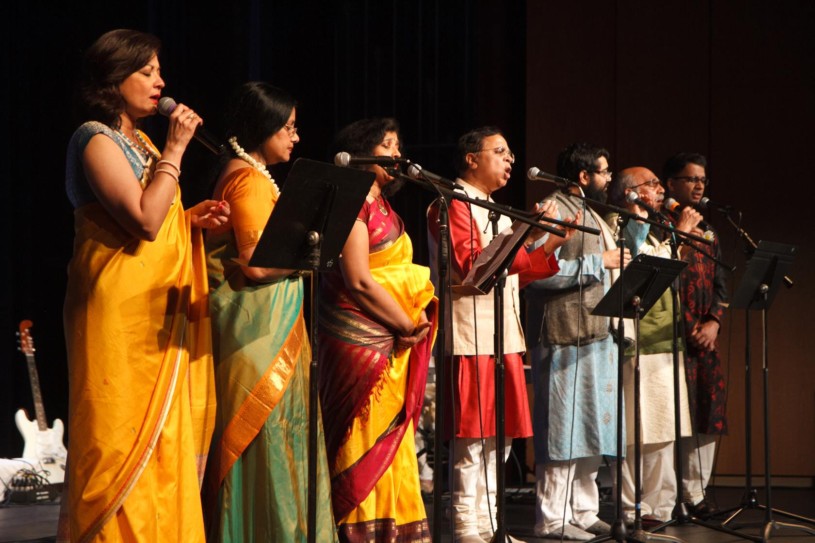 Sounds of nature were brought center stage in Raga Malhar and Megh in next segment dedicated to Vak (Language). The segment ended with an impromptu ‘instrumental jam’ in Raga Hamsadhvani by Raga-Rang orchestra. Guest virtuoso artist Nitin Mitta on tabla added delight and pizazz. The audience cheered for the various percussion and string instruments which brought the house down.

“It was an absolutely outstanding event, loved the music, melodies and the overall theme, and my favorite part was the Hamsadhvani improv, terrific!” remarked Swathi Kiran of Lexington.

The third segment brought the melodies of ‘Love’ and progressed through Bollywood favorites such as “Mere Mehboob” by Sankar, followed by an East-West fusion in Raga Todi sung by Shuchita and Aditya, which enhanced the romantic ambience in the audience.

The next segment of ‘Rasa’ (aesthetic delight) unleashed melodies such as ‘Kaun Aaya mere’ by Shekhar Shastri, ‘Bolo Na’ by Sankar, ‘Payaliya Banvari’ by Shuchita Rao; then all the vocalists joined Aditya for a kirtan in Bhimpalasi which brought a peaceful crescendo for the listeners.

“What an amazing event, so inspired and deeply fulfilling,” said Brij Masand of Wayland.

Naturally progressing, the final segment focused on ‘Moksha’; the rendition of a Vedic chant in Bhairavi by Dr. Subhadra Desai touched every soul in the audience. Satisfied and content, the Raga-Rang team unraveled a thrilling Tillana called ‘Charishnu’ in Raga Jog, concluding with the Raga-Rang theme song in Raga-Malika to tie the knot on a beautifully woven garland. Pallavi Nagesha threaded the various aspects of music by her narration.

Music lover, Nafha Salman said, “Raga-Rang is always so beautifully organized and is always worth looking forward to.”

At the end, Shekhar Shastri the producer of Raga Rang said “It is delight for us, when audiences are touched by and inspired to explore Indian classical music. Rāga-Rang is our humble effort to pay homage to the great tradition.”

In the end, I would like to congratulate everyone on a heart touching performance and making me want more in the next edition of Raga-Rang.