WESTON, MA–Gandharva Choir, the distinguished Indian Music Choir will be starting their US tour with a concert in Boston on Saturday, June 24 at Regis College in Weston, MA. Thereafter, they go on to perform in major US cities including at Kennedy Center in Washington DC.

Most Indians who have grown up in India would remember waking up on Independence and Republic Days to national songs playing on TV and radio; if so, quite likely you have heard the Gāndharva Choir. The group consists of trained classical musicians who know how to keep audiences glued for hours by unleashing an endless stream of thrilling melodic songs and compositions, in a unique style of music that is captivating for kids and the entire family. 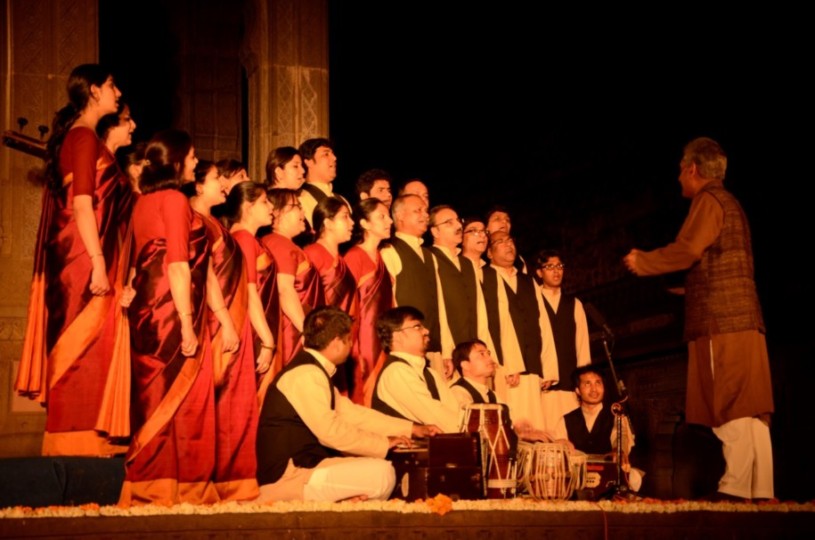 In the ancient Vedic era, group singing was prevalent as ‘Gāndharva Gāna’, as ascertained from classical Sanskrit texts on music and the arts; however, somewhere its practice vanished from Classical Indian music.  Now, nurtured over the past 70 years, this type of choral music has been revived by its founder-director Late Pandit Vinaya Chandra Maudgalya.

Since then, the group has performed all over the world including at Lincoln Center in New York and Kennedy Center in Washington DC.  Their repertoire includes classical, folk, inspirational and devotional compositions. The choir is known for its creative, innovative, and contemporary experimentation. As a result, its efforts and achievements have been successful in setting a trend of choral music in India.

Today, the Gāndharva Choir is led by Hindustani Music vocalist Pt. Madhup Mudgal who is a disciple of the genius Pt. Kumar Gandharva. Madhup ji received the civilian honor Padma Shri in 2006, and is known for his imaginative compositions for several classical dance groups, and his singing has a deep emotional calling.

Learnquest Academy of Music and Meru Education Foundation are hosting the Gāndharva Choir in the Boston area with a concert on Saturday, June 24 at 6pm at Regis College, located at 235 Wellesley Street, Weston, MA.

Come enjoy an uplifting concert and enhance your appreciation of Indian music through a unique experience.

Tickets:  General $10 and Patron $100
To Reserve Seats or for more information: