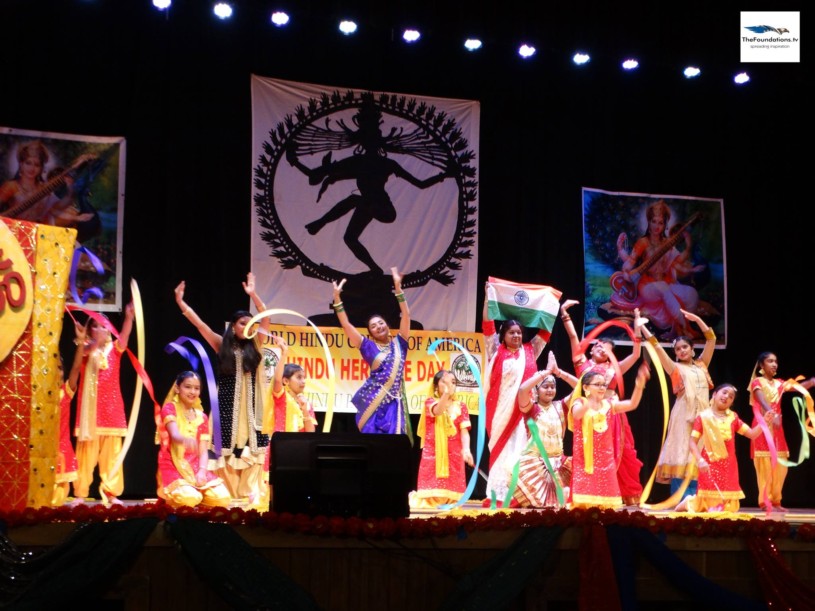 MARLBOROUGH, MA—Over 2,000 Hindu Americans filled the halls and fields of Marlborough Middle School in Marlborough, MA,on May 20th  to celebrate Hindu Heritage Day, known as HHD, the organizers said in a statement.

Every year, this heritage festival is organized by Vishwa Hindu Parishad (World Hindu Council) of America (VHPA).   This was the 21st consecutive year that a team of volunteers from VHPA organized HHD for the residents of the Greater Boston area. HHD is an inclusive event connecting almost all Boston area organizations and institutions, large and small, in an effort to unite Hindus around the world.

The event aims to instill devotion to the Hindu way of life, cultivate self-respect and respect for all people, and establish a truly global Hindu network. Adding to its historical mark, Mr. Charlie Baker, Governor of the Commonwealth of Massachusetts, and the Mayor of Marlborough, proclaimed Saturday, the 20th of May 2017, as “Hindu Heritage Day.” 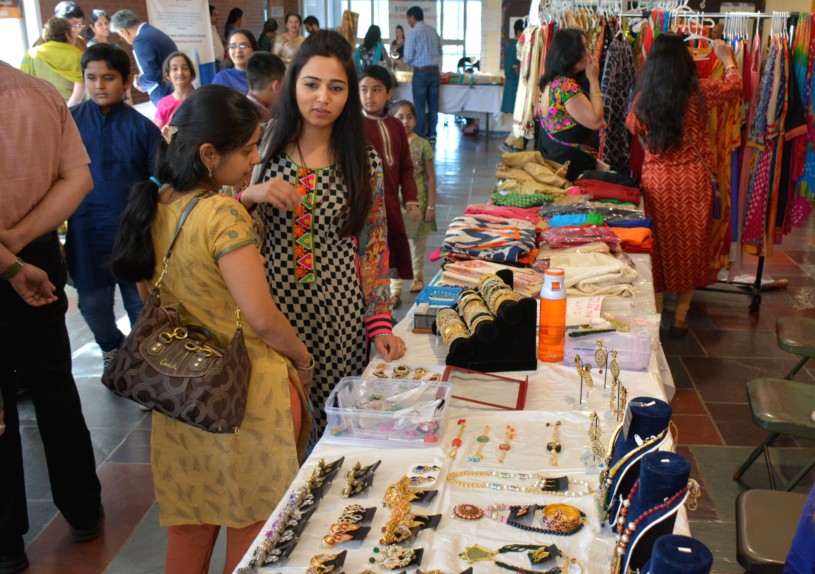 Each year HHD aims to unfurl another eternal quality of humankind, gently reminding us that no matter how disabled we are by avidya (ignorance) and enraptured we become by maya (the illusionary perception of the material world), we must continuously acknowledge our common, divine heritage and remove the veil of apparent differences –bringing us to realize that “All Are One.”

This year’s theme, “Bahurangi”, conveys this beautiful message of a unified colorful diversity of India as well. Bahurangi literally means “that of many hues, having many variations.” Bahurangi encompasses all shapes, sizes, colors, tastes, variations, and contrasts; just the way people in India are of varied religions, cultures, customs and color. Indian traditions and culture, from languages, music, dance, cuisine, customs, rituals and attire are varied. With every few miles dialects of people changes, their custom changes, and their festivals too. All these varied traditions and customs are like the different hues of a palette, and still, when they join together in One India, they shine like an unmatched Rainbow, a Bahurangi. Each color, each person is distinct, and yet bonds well with others. 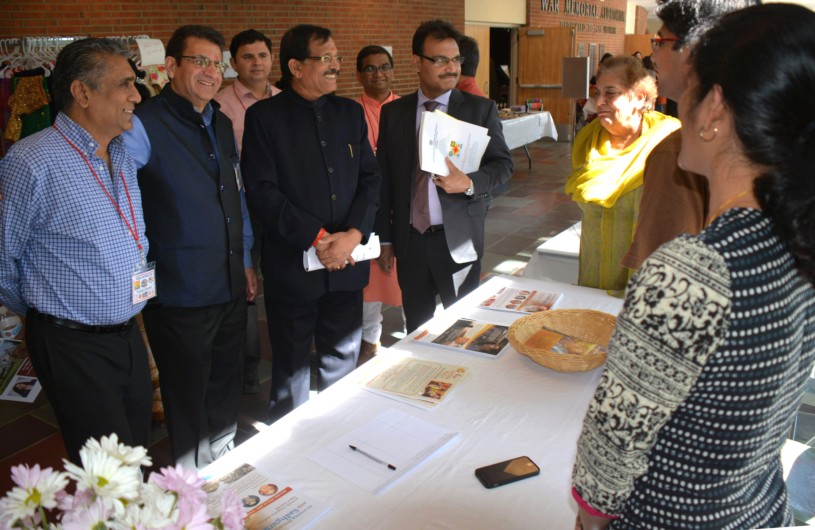 The corridors of the middle school housed a bustling bazaar reminiscent of its Indian counterpart – the main difference being that this bazaar reflected the overarching theme of Hindu Heritage, with many non-profit and educational stalls. Whereas the cultural program revved up the audience from within, taking a stroll through the halls was a hands-on experience. Pick up a pair of traditional-style, glittering kangan (bangles) at one stall and find a modern-cut Indian kurta (blouse) at another was the mindset of many patrons perusing the aisles. One of the shopper Sudha Bhutani said, “I look forward to this event every year as here I find the latest Indian Traditional clothes and Jewelry at one single place.” Those interested in a more spiritual experience could be found reading about a better way of life, yoga and meditation schools, or considering giving back to the community and pausing at a non-profit organization’s stall such as Support-a-Child, educating the poorest children in India. The experience left attendees spoilt for choice and was balanced by its taste for both modern and traditional way of life.

ringing such a theme to life in the form of a mela (fair) was a remarkable feat. Indeed it was a wonder how three simultaneously running components of the program-a cultural program, a bazaar of 29 booths, and food court with catered Indian favorites-interweaved flawlessly to both give a mela vibe and highlight the major theme. In the Mela part twenty nine stalls participated. For profit businesses included stalls from clothes, jewelry, books for children and adults, where one could buy the latest fashions at a nominal cost. There were also stalls advertising businesses like NY Life, Indian Circle for Caring, Ekal Vidyalaya, Samskrita Bharati, information about the various VHPA activities, and many more.

To add to the fun, there was face painting, which was a hit with young children, outdoors kite flying, which was enjoyed by all ages and genders, and mehndi. A new attraction was the very popular free Rickshaw Rides, which saw long lines of adults as well as children waiting patiently for their turn.  All of these activities were free.

Inside the auditorium, people waited eagerly for the cultural program. Among the dignitaries who honored the event with their presence were: guests of honor Shri S.Y. Naik, Minister of State Independent Charge (Ministry of AYUSH, GOI); Padma Shri H.R. Nagendra, Chancellor Ayurvedic University, Bangalore; Sh. Manju Nath, Director Ayurveda University, Bangalore; and from the Governor’s office Mary Troung, Executive Director, OFRI; and Nan Tang, Executive Director. These dignitaries lighted the ceremonial to start off this auspicious event. Dr. Abhaya Asthana, President VHPA; and Mr. Sanjay Kaul, Convener HHD; presented shawls and mementos to guests of honor and shared their vision for HHD with the guests.

The cultural program was started by a Shankh Naad (by Pt. Shivram Sharma and Sh. Ashwini Mishra) the purifying sound of the conch shell, which heralds auspicious beginnings, followed by chanting of the Ekta Mantra by the youngsters of Lexington Bal Vihar. This mantra celebrates the unification of all sects and peoples across India and the world, reminding us that all are the same. Janani Sharma and Sachi Badola sang national anthems of USA and India respectively. Almost all the music and dance schools of the greater Boston area were there in vibrant colorful costumes.

The cultural program, which featured more than 265 performing participants and numerous organizations, showcased the talents of renowned musicians as well as children of all ages. Almost all the music and dance schools and master teachers of the greater Boston area were represented by their best students, replete with creatively designed colorful costumes. In a dynamic four-hour program, the work of some of the most distinguished music and dance teachers of the Boston metropolitan area and parents and teachers of several regional Bal Vihars (Hindu Sunday schools) shone. The participants were of all ages, from adults to very young children, some as young as 4 years old, and represented area Dance and Music schools, several Bal Vihars (Hindu Sunday Schools), and also some guest artistes, who enthralled the audience with their expertise. From each theatrical play to energetic and expertly choreographed dance to melodious songs, the attention to detail, performance quality, costumes, and pride with which each teacher presented his or her students, added a professional touch as well as set a standard for the level of young talent in this program. 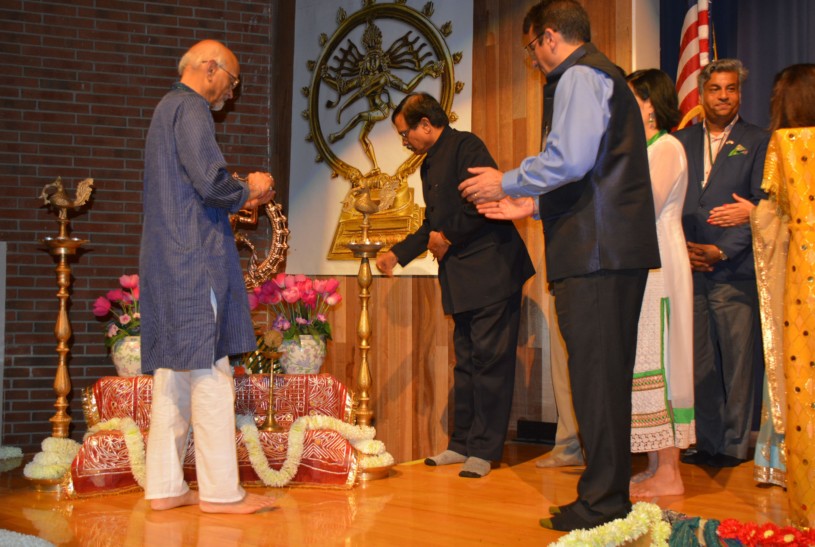 Additionally, local and visiting artists of repute also performed. Pt. Sudhakar Chavan delighted the audience with his melodious bhajans, and Valentino Almeida, New England’s favorite singer, added star power to the cultural program. There were dances, songs, bhajans, and plays that enthrall the audience. The program was a feast for the mind and the senses, keeping the audience virtually glued to their seats, taking in all the production. Four Emcees led by dynamic Gauri Chandna; Aayushi Saxena, Aneesh Bairavasundram and Srinidhi Raghavan, kept the audience entertained with their wit and wisdom, and kept the cultural program flow going.

Like each year, this year too HHD presented the award of ‘Sanskriti Saurabh Sammaan’ for the selfless service to the community. This year this prestigious Sammaan was given to Smt. Ranjani & Shri Anil Saigal Ji, for their generosity and committed work towards the community. Other members who were recognized for their significant contributions were Shri Mahendra Patel, and Shri Ashok Patel. Dr. Abhaya Asthana and Shri Sanjay Kaul recognized the Sammaan recipients in the award ceremony. 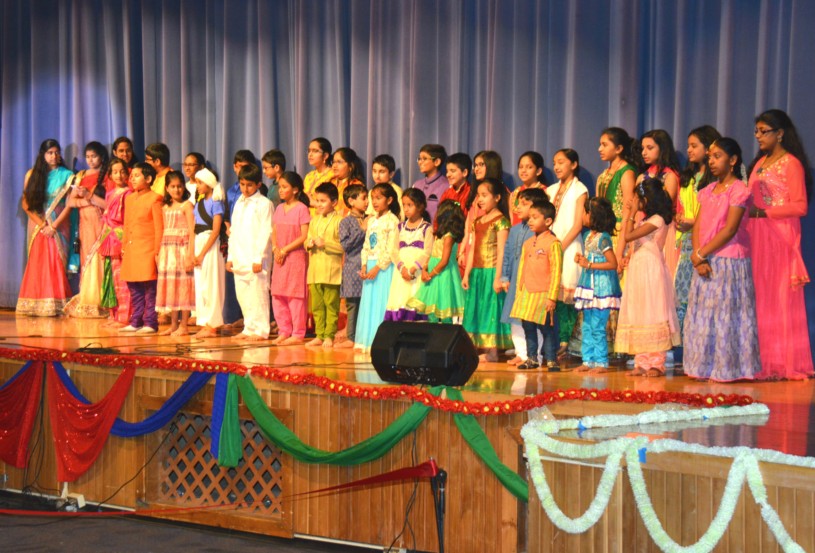 In Food Court, Indian snacks like Samosa, Pakora and Chaat as appetizers; and later in dinner, a full-fledged Indian meal was served consisting of Paneer, Daal, Aaloo Gobhi, Naan, Rice, jalebi and much more. All the delicacies were prepared by local business Minerva Restaurant. Kulfis flavors ranging from Mango, Pista and Malai to Rose cashew, only made our sweet tooth asking for more. The Food court was indeed a place of joy.

Also, VHPA desk provided information on the status of non-profit OM Hindu Community Center (OMHCC) in North Billerica. If you are interested in becoming a volunteer for this project or simply donate for it or any of the VHPA’s projects, please contact: Sanjay Kaul [sanjaykaul@hotmail.com]. Your donations are tax-deductible and would be most appreciated. Checks can be made payable to OMHCC and mailed to P.O. Box 6323, Holliston, MA 01746. 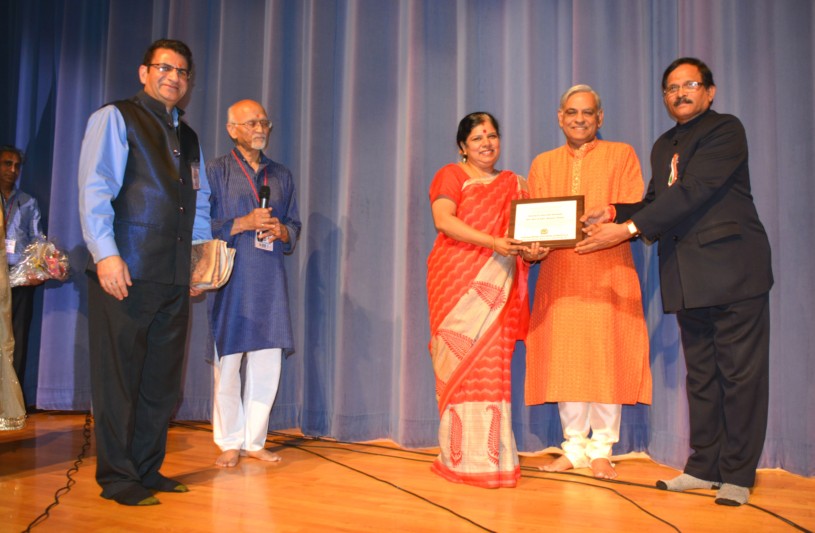 Be it the cultural program, Mela, Food court, or this HHD event as a whole; everything was so close to perfection, and all because of the efforts of some 100 plus volunteers who worked ceaselessly to bring us the magic of a flawless and successful event. From directing backstage traffic to handling technical stage effects such as music and lights, these volunteers kept the flow going. It was their experience and selfless commitment to perfecting the art every year that made this Hindu Heritage Day what is was. For those who have attended previous HHD events, it was a pleasant surprise to see familiar young adults and teenagers joining the effort, as it clearly portrayed a contagious desire to learn about their heritage and engage in the effort of bringing that knowledge to others. But for HHD regulars, it’s something that comes as no surprise that HHD is an event faithfully put together by the adults and the youth of the New England community, validating the modern approach underlying its mission to celebrate with, bring together, and revive understanding in those who belong to our heritage.