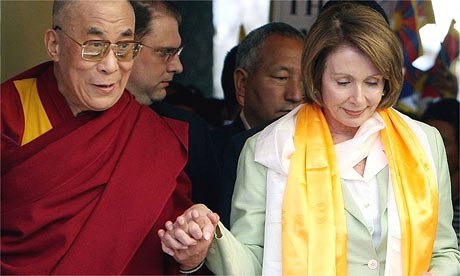 “Relevant Congress delegation in meeting with Dalai Lama in Dharmsala has sent a very wrong signal to the outside world about supporting Tibetan independence and violated the US government’s commitment to not support Tibet’s independence,” Chinese Foreign Ministry spokesperson Geng Shuang said at a press conference.

Pelosi and a group from the US House of Representatives met the spiritual leader at Dharamsala in India where the Dalai Lama has lived since he fled his homeland in 1959.

Beijing accuses the Dalai Lama of secessionist activities in Tibet.

“The 14th Dalai Lama is a political exile who has long been engaged in anti-China separatist activities in foreign countries under the pretext of religion,” Geng said.

“He is also head of the Tibetan independence group.

“We are firmly opposed to that and have lodged solemn representation with the American side.

“We urge the relevant Congressmen of the US to properly deal with the Tibetan related issues and stop all kinds of contacts with the Dalai Lama and take immediate measures to remove the negative impact.”

The visit was slammed by China, which retaliated by renaming six towns in the northeastern Indian state.

Beijing opposes leaders of countries meeting the Dalai Lama, who it calls a “wolf in sheep’s clothing”.