Beyond a prominent astrological “influence”, an idea of masculinity (and even men’s origin) and a cryptic utterance in the first Harry Potter book among its varied cultural expressions, the Red Planet, easily seen by the naked eye, has long fascinated us. But Mars has much greater significance — scientifically and maybe even existentially.

Not only has Mars forced us to re-evaluate our ideas about our galaxy’s formation, says science writer Nicky Jenner, it is the astronomical body on which most attention, effort and funds have been spent — even more so after the beginning of spaceflight six decades ago.

There have been 43 such attempts from 1960 to 2016, successful and unsuccessful, by not only the US and then Soviet Union and later Russia but also by the European Space Agency as well as those of Japan, China and India, and more in the pipeline. While the UAE is planning one by 2020, so are a raft of private companies, some of which even plan setting up colonies there.

But what is it about Mars that creates so much interest among us, and do our perceptions correspond with the reality of the planet, now that we have obtained a lot of knowledge about it, especially the crucial issue of life on it? 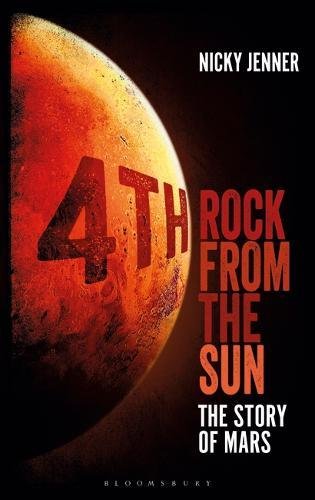 This is what Jenner seeks to tell us in this fascinating study of Mars, in its various aspects over the ages and into the future, and its impact on life, the universe and everything.

“Even if your primary relationship with Mars is the form of the eponymous chocolate bar — and who would blame you — it’s likely that this single-minded focus over the years has caused you to know at least a little about the planet itself. Mars is the most-googled planet after Earth itself and we’ve sent more probes to Mars than anybody in the solar system,” says Jenner, who has written for many popular science magazines and has been a copywriter for the European Space Agency among other leading scientific institutions.

And over the succeeding pages, she does it with thoroughness — right from clarifying that it is not merely red — bolstered by clarity and wit.

She begins with the cultural impact of the planet, right from the Roman god of war whose name adorned it, and why it, along with the other known astral bodies, became significant in astrological traditions around the world, as well as in palmistry. Her conclusions about these “arts/sciences” are not surprising.

The next two chapters take up Mars in popular culture, bringing together everything from David Bowie to the Justice League of America (for those who remember DC comics) to John Gray of “Men are from Mars, Women are from Venus” fame down to the Matt Damon hit “The Martian” (2015). (In one of the fascinating asides that Jenner’s work has in abundance, we learn that the film cost more to make than India’s Mars mission.)

Jenner finally comes to the scientific aspect. While she has already not spared any detail in warning us about the harsh and dangerous conditions on the cold, arid planet, and what can happen to us if we step on it, she also goes to explain Mars’ various quirks as well as its unlikely satellites.

These include the planet’s occasional “backward” motion, what happened to its water and why its terrain is unsafe for us. We also learn why it bucks the trend in being smaller than the Earth and what this means to the accepted theories of our social system’s creation.

Jenner then goes into the a history of our “contact” with the planet, the debates about life on it, including by those who believe Barack Obama has been to Mars (seriously) and whether it can become a second planetary home for us.

This, she contends, on listing technical, health and social issues, is extremely unlikely as of now. Perhaps human civilisation’s future will be better served by keeping better care of our existing home. (IANS)