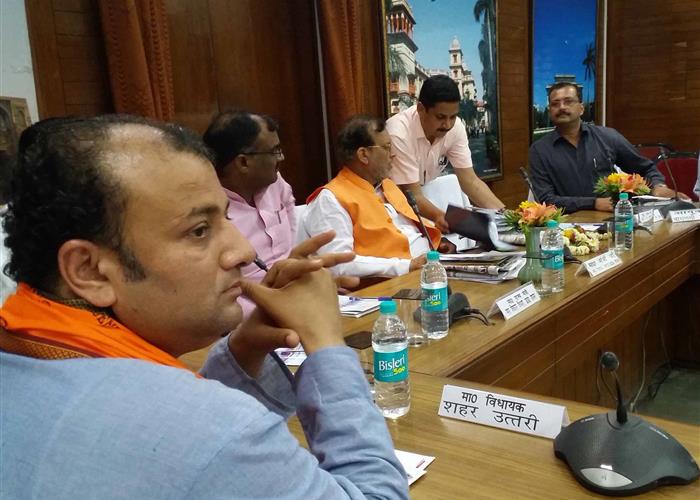 Lucknow– Having been cold-shouldered by the previous Samajwadi Party regime, it is now Advantage Varanasi as the new Bharatiya Janata Party (BJP) government has put Prime Minister Narendra Modi’s parliamentary constituency back on the front burner.

Despite concerted efforts by Modi at the Centre, the city, considered one of the oldest in the world, did not see the promised makeover from Kashi to Kyoto because of the “step-motherly” treatment meted out by the Akhilesh Yadav government. But things are changing now that the BJP is in power in the state.

According to officials, Chief Minister Yogi Adityanath spends 30 minutes daily to take stock of development projects in Kashi. He has also given oversight of these projects to a two-minister group, and has himself held a review of works initiated in the past two years.

Modi, soon after his victory in 2014, had promised to turn Kashi into Kyoto, the Japanese city known for its mix of ancient and modern. But a non-BJP government in the state and the resultant lack of coordination meant that what the Centre proposed, the state disposed.

That change is in the air became evident as Adityanath dispatched state Urban Development Minister Suresh Khanna to Varanasi on April 15 to track progress on projects in the city, and said that “if need be”, he himself would “assess the situation on the ground”.

According to one official, the Chief Minister has asked bureaucrats to ensure completion of work on some projects within three months. “At a recent meeting, he observed that work in Varanasi and neighbouring areas was slow in ratio to the funds allocated by the Union government,” the official told IANS.

The projects rolled out in Varanasi come under various departments, including urban development, power, tourism, public works, housing, and irrigation. There are also some under the Varanasi Development Authority and the National Highways Authority of India (NHAI).

An ambitious roads project to link eight districts to Varanasi has been stuck as compensation was not paid to farmers whose lands were acquired. The Divisional Commissioner of Varanasi has now been asked to ensure distribution of money in Ghazipur, Varanasi and Jaunpur at special compensation camps.

The road projects — Varanasi-Gorakhpur, Varanasi-Lucknow and a ring road — fall under the NHAI and the Akhilesh Yadav government had done precious little to get things moving, an official contended.

Work on under-construction bridges — expected to ease the city’s chaotic traffic — is now on a June 30 deadline and Adityanath has asked the Uttar Pradesh Bridge Corporation to ensure adequate workforce is provided.

The Public Works Department (PWD) has been sanctioned Rs 90 lakh for completion of an under-construction road overbridge (ROB) at Maduadeeh and for shifting of a sewer line from there. Again, the deadline is June 30.

Similarly, those working on the 1,710 metre flyover linking Chaika Ghat to Lahartara have been asked to finsih work by March 2018.

Adityanath has also okayed a proposal for a five-km four-lane road between Shivpur-Lahartara (Phulwaria) and a bridge on the Varuna river at Kuniya Ghat. Another project, worth Rs 88 crore, will build dividers on all roads and re-layer surfaces to make them dust free.

A Detailed Project Report (DPR) for multi-level parking lots in Kashi has also been sought. These structures will be made by the municipal corporation in the first phase and the PWD in the second phase. The Divisional Commissioner has been authorised to adopt a PPP model for this project.

Given the city’s drinking water problem, Adityanath has ordered a probe of works undertaken by the Jal Nigam under the Jawaharlal Nehru National Urban Renewal Mission (JNNURM). The Nigam had constructed 23 overhead tanks and branch lines without a feeder line to link these. While over Rs 500 crore has already been spent on this project, the people of Varanasi are yet to benefit.

Clearly, if the new Chief Minister walks his tough talk, the people of Varanasi may well be lucky enough to see “acche din”.