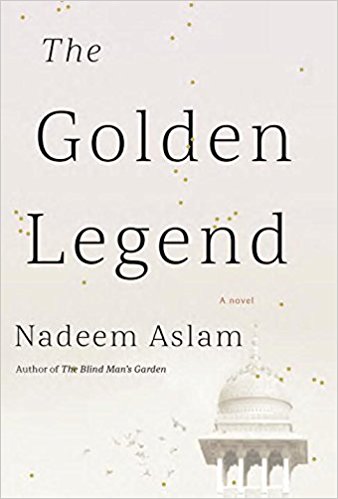 Nadeem Aslam never disappoints his readers and the characteristic features of his novels — vividly beautiful, lucidly painful and yet surprisingly convincing — tend to leave a lasting impression.

It was this overwhelming sense of reverence for the Pakistan-born author that led one to flick through this brilliant novel, which combines realism and fable in a tale that is exhilarating as it counters despair with hope.

“The Golden Legend” is a thrilling novel and carries more realism than meets the eye. Just like “the spring of hope” and “the winter of despair” that Dickens mentioned in the opening paragraph of “A Tale of Two Cities,” Aslam’s fantastic work seems to reverberate with paradoxes and yet sounds surprisingly convincing.

The novel, set in contemporary Pakistan, begins on a dark note: The death of an architect, Massud, who leaves behind his wife and collaborator Nargis. Together, the husband-wife duo have worked hard to preserve culture and build exquisite buildings. All of this at a time when the world around is turning increasingly hostile.

After the death of her husband, Nargis is solely responsible for bringing up Helen, the daughter of their Christian servants. Now Helen too is unsafe. A journalist by profession, she is the target of Islamic fundamentalists who are not at ease with her reporting.

The fundamentalist elements, on their part, want the Christians to be driven away from Pakistan and Helen, being both a Christian and a journalist, finds it difficult to survive in the increasingly hostile surroundings.

Meanwhile, Nargis is persuaded, or rather compelled, by a powerful US intelligence officer, who demands she publicly forgive the American citizen who killed her husband.

All of these little elements form the perfect background of violence and fear and allow for a classic shift in the plot.

Aslam, in a departure from his previous novels, appears to have given greater emphasis on highlighting the lively and colourful aspects in this latest work.

Enter Imran, a Kashmiri terrorist, who decides on a course-correction soon after learning that he is expected to kill and cause brutality in Pakistan itself. Straight out of some fairy tale, the next twist in the novel brings Helen and Imran face-to-face — and they fall in love.

The love story comes to life on an island, where the two unusual souls — Helen, a Christian and the target of fundamentalists; and Imran, a Muslim and a former terrorist — seek to unite. Their love story seems to be just blossoming when darkness spreads once again.

It was on this very island that Nargis and her late husband Massud had built a mosque to bring the different branches of Islam together and decrease tensions among them. Massud had even planned to build a Hindu temple and a Church beside it to spread communal harmony among the residents.

Fate, however, had other plans. A murder is committed inside the mosque and the entire island is abandoned! The trio — Nargis, Helen and Imran — remain at constant risk of being discovered and harmed.

So the characters must do something, right? As they say, “Love alone is not enough,” Helen and Imran, led by Nargis, must engage in something to keep the plot moving and its readers engrossed.

Aslam, a master storyteller, understands the nerves of his readers and sort of himself talks in the voice of his different characters. He acts like a psychiatrist, diagnosing his readers while building the plot on his characters. Massud’s father had written a splendid book, honouring the great ideas and philosophies that spread over the ages.

This book is, unfortunately, torn apart by the US intelligence officer. The three of them spend the following days in weaving the pages of this book together in a golden thread. Can it get more magical or realistic?

Aslam is at his creative best in “The Golden Legend”, and he succeeds in busting all typical notions associated with romantic fiction. The novel, while being enchantingly romantic, reverberates with the contemporary socio-political situation in Pakistan.

Even as Pakistan is caught between violence and fundamentalist elements, Aslam elegantly portrays “the pockets of love” and the collective spirit of ordinary people, for whom evil is not a way of life but a stupidity, which has no place in their lives.

No doubt the novel is full of despair and disdain, but at the heart of it lies hope. And this is what makes “The Golden Legend” an exhilarating read. (IANS)