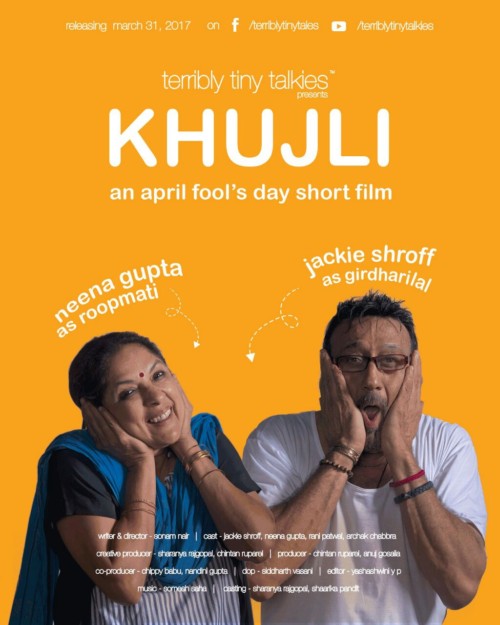 Stilted dialogues and an exaggerated perception of middle-class bravado do not take away from the sheer pleasure of watching short film “Khujli” — in which actors Jackie Shroff and Neena Gupta come together for the first time as an ageing, though far from fading, couple trying out new sex positions for the first time in their compatible togetherness.

It all happens in a flash after the huffing and wheezing Shroff discovers a pair of sexy handcuffs in his son’s room.

“Do you even have an idea what he must be doing with it,” he fumes, red-faced and frazzled.

“Aap toh… Bas,” she sniggers at her aghast husband.

The parodic premise of a husband suddenly discovering layers of sexual repression in a wife who suddenly wants to experiment in the bedroom could have been interesting. In India, we presume that parents of grown up children prefer to lead sexless lives. “Khujli” thinks giggling and bantering is all one needs to make the couple’s pleasurable new pilgrimage look powered and exciting.

Jackie is a bit clumsy doing the clumsy act, maybe because he has never been comfortable with intimacy on screen even in his heydays. But Neena lets herself go with unabashed abandon. It is their combined post-menopause effervescence that furnishes the somewhat unfinished film with some kind of a closure.

Much of their play-acting in the secrecy of their bedroom looks improvised, and not in a very inspired way. I mean, how far can you stretch a joke about a husband playing Gabbar and wife playing Basanti? Nonetheless, just watching the lead pair have fun with the rather meatless material is a pleasure.

The short film by Terribly Tiny Talkies, begins and ends with the creaking of a bed and pleasurable sounds from the couple.

And give “Khujli” two-and-half stars. (IANS)