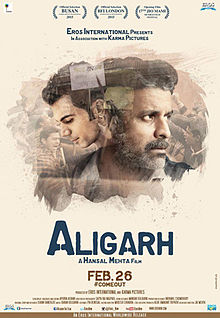 Mumbai– Filmmaker Hansal Mehta says he may be disappointed, but respects the decision that “Aligarh” was not considered worthy of a National Award. However, he has hit out at Priyadarshan — jury chairperson of the 64th National Film Awards — for his views on homosexuality not figuring as a ‘fantastic’ social issue.

“Aligarh” is a widely acclaimed film about the real life story of a professor who was suspended for being a homosexual. The movie gave a fillip to the discussion of LGBTQ rights in the country.

On Friday, after the 64th National Film Awards were announced, Mehta had expressed disappointment but hoped the larger purpose of the movie — to spark a debate around LGBTQ rights — is not ignored.

A day later, he tweeted: “When I expressed disappointment about the National Awards, it was personal and not directed at anybody. I would like to believe that the jury has done its best within their understanding and framework.

“‘Aligarh’ was not considered worthy in that framework by the appointed juries just like ‘The Lunchbox’ was ignored in the year that ‘Shahid’ won two National Awards. I did not complain then and I’m not complaining now either.

“I’ve got to respect the decision and move on. What hurts is that in some statement, the chairperson who I respect and whose films I’ve often enjoyed, says that ‘While watching films, we realised that a lot of Bollywood movies were themed around homosexuality. The movies are not highlighting social problems. Whereas regional cinema are themed around fantastic social issues’.”

“It makes you wonder and worry about LGBTQ rights and their absence in the current mindset as ‘social problems’. Priyadarshan sir, ‘Aligarh’ did not meet the standards set by you and your jury – I accept that. But your views on homosexuality not figuring as a ‘fantastic’ social issue rankles,” Mehta added. (IANS)