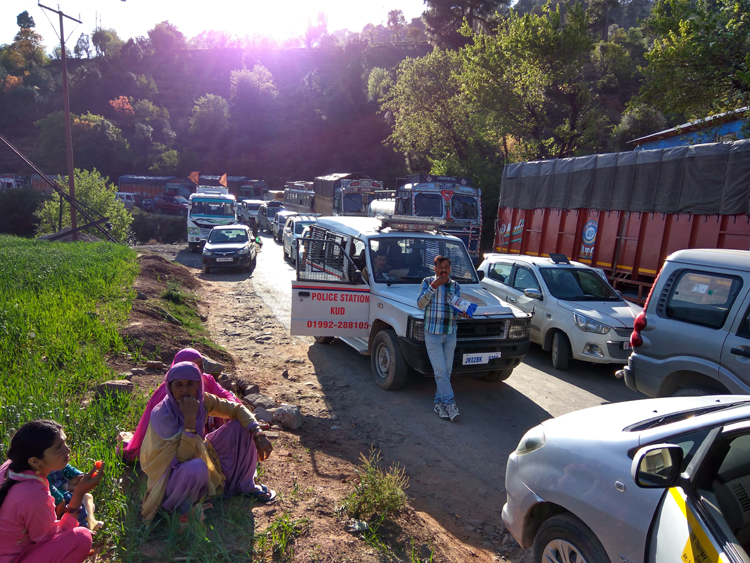 Chenani, Jammu and Kashmir– Jammu and Kashmir’s Chenani-Nashri tunnel, touted as India’s longest tunnel, is also the country’s “safest”, with provisions to ensure the safety of passengers from fire incidents and collision inside the 10.89 km-long tunnel on the Jammu-Srinagar Highway, says a top official.

The Chenani-Nashri tunnel, built with new Austrian tunnel technology, has a series of smart safety features — all functioning through a single software.

“Its uniqueness is that it has an Integrated Tunnel System, under which all the systems such as Entrance Detection Control System, Electrical Fire Signalling System and Video Surveillance System and Evacuation Broadcast System, are controlled through one particular software,” Ashutosh Chandwar, Vice President of Infrastructure Leasing and Financial Services (IL &FS), told IANS in an interview.

IL&FS bagged the tender for executing the project with NHAI’s support.

According to Chandwar, in tunnels abroad such safety techniques require a separate software for every feature, making it difficult to be handled.

Stating that the Chenani-Nashri tunnel can be called the “safest highway tunnel in the country”, Chandwar said that the tunnel also has specialised cameras which would count the number of vehicles in the tunnel and accordingly set the speed limit.

“The Traffic Control System in the tunnel has green and red lights, the speed limit signs and others are variable signs depending upon the traffic condition inside the tunnel,” said Chandwar.

The tunnel is part of the Jammu-Srinagar Highway’s four-laning project. Twelve other similar tunnel projects are being constructed to reduce travel time and distance between Jammu and Srinagar. The Rs 2,519-crore all-weather tunnel, is located at an elevation of 1,200 metres.

The tunnel will help reduce the 41 km-distance between Chenani in Udhampur district and Nashri in Ramban to 10.89 km and can be covered in 10 minutes, instead of the two-and-half hour needed currently. The Jammu and Srinagar Highway is considered to be the lifeline of the state.

A unique feature of the tunnel is that at every 150 metres it has an emergency SOS box and a safety evacuation passage connecting to a safety tunnel constructed parallel to the main tunnel.

“The tunnel has an Incident Detection Systems under which if any accident happens, our control team will get to know before the victim contacts us through the SOS call box. Accordingly, our rescue team will help in evacuation of the person and vehicle through the safety tunnel,” said Chandwar. He said the tunnel has hydrants at every 150 metres, to tackle any kind of fire incidents.

According to Chandwar, who has been monitoring every development related to construction of the tunnel, at every 75 metres there is a video surveillance monitor through which cameras will help in detection of any “suspicious acts” by anyone inside the tunnel.

“There is a tube to provide fresh air. Everything is well managed,” said Chandwar.

According to official statistics, the entire project was completed in five years and it was closely monitored by the Ministry Of Road, Transport and Highways.

Chandwar, who was earlier with the National Highways Authority of India, said the tunnel also has a special drainage system to flush out water flowing in from the mountains and to use it for fire fighting and construction activities.

“This tunnel is completely dry, which means not a single drop of water will be present in the entire tunnel. To make it dry we have put a water proofing membrane behind the concrete walls. Behind the membrane there is a system which collects the water coming out from the mountains and takes it to a central drain. Once collected the water is saved for captive use such as fire fighting and construction activities. This water is rock water so it is completely safe for drinking as well,” said Chandwar.

“We also faced severe difficulties in taking the construction material inside and taking out the excavated material, as there were only two ways to enter the tunnel. The third challenge was to maintain the ventilation system for the workers inside as they should get enough oxygen. We were compelled to install ventilation ducts and fans,” said Chandwar.

The National Highways and Infrastructure Development Corporation Ltd (NHIDCL) has also decided to replicate the technology for the upcoming 14 km Zoji la tunnel, between Leh and Srinagar in Jammu and Kashmir. (IANS)