The rise of the Bharatiya Janata Party (BJP) from two seats in 1984 to a staggering 282 in 2014 may be seen as the growing appeal of its ideology — Hindutva — among the masses, but this compelling work of extraordinary research provides enough evidence to suggest that the ruling party’s advance over the last three decades is not its journey alone and has been accompanied by the steady progress of fringe organisations which, in turn, have been the “foot soldiers” of its ideology. 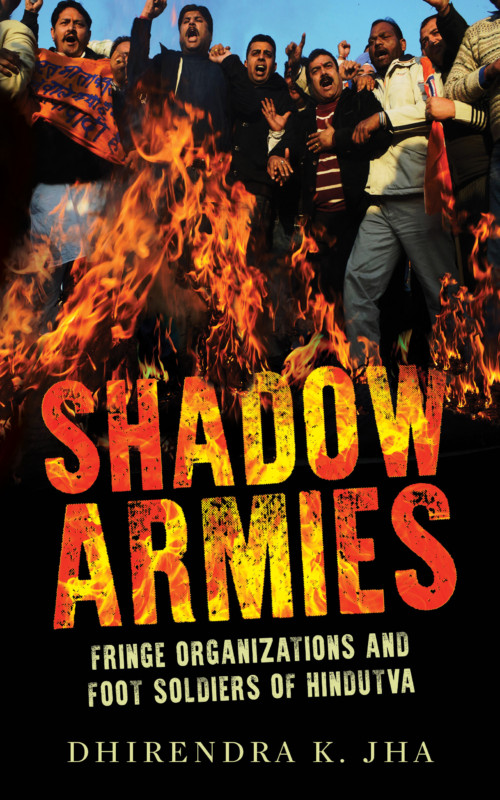 From Yogi Adityanath’s Hindu Yuva Vahini in eastern Uttar Pradesh and the “love jihad” obsessed Sri Ram Sene in Mangalore to the Sanatan Sanstha, whose members have been arrested for the murder of rational thinkers Narendra Dabholkar, Govind Pansare and M.M. Kalburgi, the direct outcome of the activities of almost all of these eight organisations — polarisation — has not only served to foster a pro-Hindutva environment but has, indeed, brought about long-term electoral gains for the BJP.

It is perhaps the first book of its kind that has carefully studied the functioning and evolution of fringe organisations in the country and linked, with evidence, their connection to a mainstream political party.

Jha asserts that India has witnessed “astonishing growth in the politics of Hindutva” and, by providing careful insights into the structures as well as the evolution of such organisations, claims that there is a common connection between all such forces.

The Rashtriya Swayamsevak Sangh (RSS) is the vanguard of this ideology and, according to the book, all these organisations, directly or indirectly, function under the guidance of the RSS to ensure that one particular community, the Hindus, have the exclusive right to define our national identity.

But, some may argue, the BJP is the only RSS outfit given to politics and the RSS does not necessarily claim to be the vanguard of all such Hindutva forces.

The author narrates numerous anecdotes and examples to convey, quite clearly, to his readers that in practice most of its affiliates work as “political instruments” to convert India into a Hindu Rashtra. Their purpose and intentions are achieved in the name of protecting Hinduism, which ultimately swings electoral gains in favour of the BJP.

“Though the RSS publicly eschews politics, as the parent body it not only supplies much of the strategic and ideological direction as well as cadres and leaders to the BJP and other associates, but also has its hand — directly or through its affiliates — in several communal conflagrations. It is these attacks on minorities that lead to the kind of polarisation necessary for the growth of Hindutva politics,” Jha says bluntly in the introduction.

The author is struck by the “omnipresence” of these pan-Indian outfits and finds that their divisive agenda is carried out in a highly “equivocal” manner.

“Whenever these other bodies create a controversy, the RSS and the BJP promptly label them ‘fringe organisations’. The fact, however, is that they are active parts of the Sangh Parivar, working as buffer organisations for doing the dirty work the BJP and the RSS were once obliged to do themselves,” Jha maintains.

Jha argues that the RSS and the VHP are the biggest “shadow organisations” of the BJP and that except for contesting elections, they do almost everything that a mainstream political party would do — mobilise masses, develop issues for political polarisation, and play a role in identifying electoral candidates and managing booth-level campaigns.

The findings of the book suggest that a central focus of all of the eight organisations revolves around the portrayal of Muslims as a threat to Hindus. Though the practitioners would never say this in public, Jha claims, the objective of these activities is always to create false fear among Hindus and stoke the polarisation of their votes in favour of the party leading the forces of Hindutva.

The eight fringe organisations that figure in the book are Sanatan Sanstha, Hindu Yuva Vahini, Bajrang Dal, Sri Ram Sene, Hindu Aika Vedi, Abhinav Bharat, Bhonsala Military School and Rashtriya Sikh Sangat. The author has, obviously, researched and compared, wherever necessary, the functioning of these bodies with the RSS and the VHP.

“Shadow Armies” is a scholarly offering and a result of research that attempts to unravel what has generally escaped both the imagination and research of leading writers. Jha’s book will stay relevant as long as the fringe organisations continue to stir controversies and may well be regarded as an apt contemporary investigation into the Hindutva brigade. (IANS)