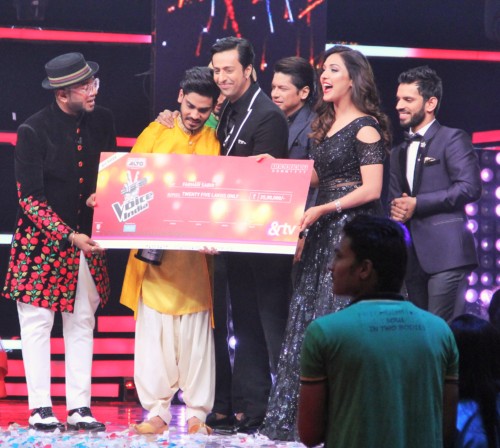 Mumbai–Delhi-based Farhan Sabir on Saturday was announced as the winner of popular singing reality show “The Voice India Season 2”.

Along with the title, Farhan, 19, took home a cheque of Rs 2.5 million and a Maruti Suzuki Alto K10. The top four finalists also received gift hampers, read a statement.

“I am honestly speechless right now and the feeling of winning the show is still sinking in. I will most certainly cherish this moment and work harder to find myself a place in the music industry,” said Farhan, who left studies at 19 to fend for his family and started singing at a local cafe in Delhi.

He added: “I would like to thank Shaan sir who has been more than a mentor to me in this journey. Also, I would very humbly like to thank the audience for believing in me and my talent. Without their support I don’t think I would have come this far and celebrating this victory.”

The finale of the &TV show was a star-studded affair with actress Anushka Sharma gracing the stage along with performances by Mika Singh and coach Salim Merchant. Legendary singer Asha Bhosle also made the finale memorable.

“‘The Voice India’ has been a learning ground for me as well and I am going back with a lot of memories which will be treasured. Having said that, my role as a coach is not over yet. I am more than happy to welcome each and every participant who wants to learn and jam with like-minded musicians,” Shaan said.

Haven’t used glycerin to cry in any scene: Sonali Nikam

Mumbai–TV actress Sonali Nikam, who is currently seen in TV show “Ek Vivaah Aisa Bhi”, says that she has not used glycerine to cry in any of the emotional scenes.

“When I’m acting, I transform into that character altogether. I live and breathe that character to the fullest, which in turn allows me to feel every emotion to the fullest. Acting becomes easy when you connect to the character. And in that case, you don’t need glycerine or anything external to make you cry,” Sonali said in a statement.

On being asked about the best scenes that she has shot till date for “Ek Vivaah Aisa Bhi”, she reminisced a scene when her character’s son Veer comes to her to give her bangles back.

“I don’t know how and why, but that scene made me so emotional. A scene which was supposed to be a simple mother-son bonding scene turned out to be so beautiful and powerful. I think that’s the power of acting,” Sonali said.

New Delhi–Television actress and host Pooja Gor, who is remembered as the strong headed girl named Pratigya from the show “Mann Kee Awaaz Pratigya”, feels that the small screen content has grown and developed over the years.

Talking about the TV content, Pooja told IANS: “The best part is that the small screen (content) has developed and grown a lot. It is experimenting with a lot of shows… Every network is trying something different and we are growing that way. We need that more, of course, but a mix of it.”

But the saas-bahu shows will always be there as the small screen audience is mostly women.

“TV is a medium that caters to the masses. The audience of the small screen is majorly the women… We can’t avoid the ‘saas-bahu’ element in the show at all… It is very important as these are really important relations in our societies. So, those are always going to be there,” said the actress, who is often seen hosting the crime drama show “Savdhaan India”.

Chennai– Zee Network has bagged the satellite rights of superstar Rajinikanth’s magnum opus “2.o”, which is being made in three languages, the makers announced on Monday.

According to industry sources, the deal was closed at a whopping Rs 110 crore.

Being directed by S. Shankar, the film is a sequel to Rajinikath’s 2010 blockbuster “Enthiran”.

The film marks the Tamil debut of Akshay Kumar in the role of an antagonist.

The Rs 450-crore film will simultaneously release in Tamil, Telugu and Hindi this Diwali.