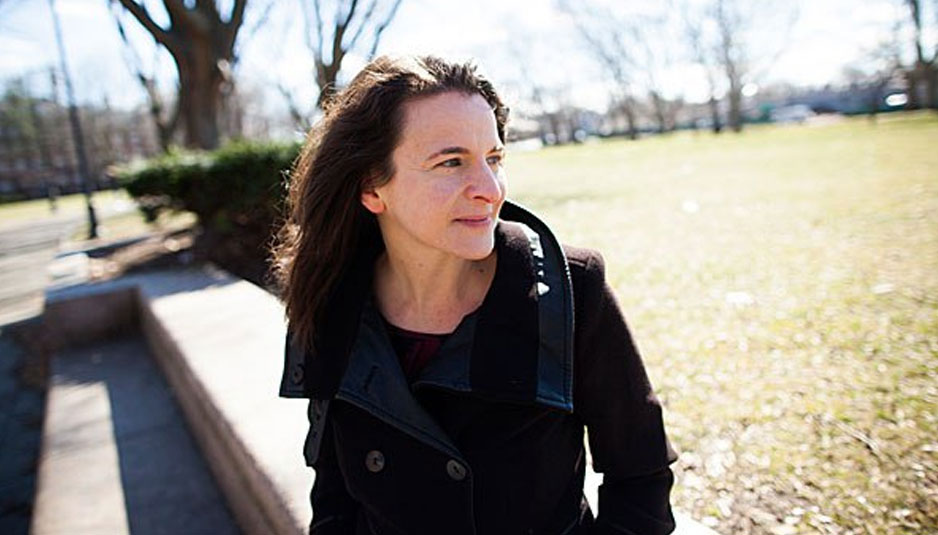 Few people who decide to become writers expect fame to follow. All that most writers hope for is that the work is good, maybe even important, and that people pay attention to it.

Over the last decade, Sarah Hurwitz ’99, J.D. ’04, has managed that and more as a speechwriter for one of the nation’s most gifted orators, Barack Obama, and two of the world’s most commanding and admired women, Michelle Obama and Hillary Clinton.

Hurwitz had been a largely under-the-radar figure outside of Washington, D.C., traveling the world crafting keynote addresses, convention speeches, and remarks for campaign rallies, commencements, and other major events — until last summer.

That’s when the first lady wowed the Democratic National Convention (DNC). In July, she made the case for Clinton in what many called a historic speech referencing living in the White House (“Today, I wake up every morning in a house that was built by slaves”), and followed that with an emotional, moving speech in October rebuking Donald Trump’s videotaped remarks about groping women (“It has shaken me to my core … The shameful comments about our bodies, the disrespect of our ambitions and intellect”). Melania Trump’s unexpected partial resurrection during the Republican National Convention of Michelle Obama’s memorable 2008 DNC speech also brought Hurwitz some additional, if awkward, notice.

While not ready to comment publicly on that episode, Hurwitz, a spring fellow at the Harvard Kennedy School’s Institute of Politics (IOP), said she understands the former first lady’s broad appeal and influence, attributing it in part to an unshakeable sense of who she is and an unwillingness to compromise her core beliefs and values.

“Mrs. Obama is … a fundamentally authentic, honest person. She doesn’t say something unless she truly believes it, and people respond to that,” said Hurwitz from her IOP office.

Long passionate about politics, Hurwitz wasn’t entirely sure what path to take while she was a social sciences concentrator living in Quincy House.

“I knew I wanted to work in politics somehow, but I had no idea where,” she said. “It’s hard to know what these jobs actually entail when you’re just a student.”

While still at the College, Hurwitz interned in Vice President Al Gore’s speechwriting office, and staffers there helped her land a job after graduation as a speechwriting research assistant for Kathleen Kennedy Townsend, then lieutenant governor of Maryland. Not long after, influential U.S. Sen. Tom Harkin of Iowa brought her on as his speechwriter.

“Writing for Harkin — I just didn’t really know how to write a speech. I was sort of freelancing, just doing my best. But by the end of the year, I think they were really happy that I decided to go to law school,” Hurwitz joked.

At Harvard Law School, she teamed up with classmate Josh Gottheimer to do some speechwriting on the side. Gottheimer, now a New Jersey congressman, was the more seasoned of the two, having written for President Bill Clinton.

“He really helped me understand what makes a good speech,” said Hurwitz. “He really taught me the art of writing to be heard, as opposed to read, which I don’t think I quite understood.”

As his deputy, Hurwitz wrote for Gen. Wesley Clark, running in the 2004 Democratic primary, but moved on to U.S. Sen. John Kerry’s campaign after Clark dropped out. When Hillary Clinton jumped into the 2008 presidential race, Hurwitz served as her chief speechwriter, and would go on to craft her memorable concession to Barack Obama, an address that vividly captured the milestone political moment. Just days later, as Hurwitz was still reeling from that disappointment, Obama’s chief speechwriter Jon Favreau, whom she knew from the Kerry campaign, offered her a job.

“I was so incredibly proud to work for Hillary. I love her. She’s been one of my heroes since I was a kid. But I also came to really respect and admire Obama, and so when she conceded I was really thrilled to be able to go work for him.”

Hurwitz joined Obama’s speechwriting team at the White House, but soon found herself frequently pitching in when Michelle Obama needed remarks prepared. The two had hit it off during the 2008 Democratic convention, and soon it became clear that a permanent shift to the East Wing was in order.

Unlike President Obama, who famously liked to put down his ideas on yellow legal pads and offer edits and do rewrites until the last minute, the writing process with the first lady was a methodical collaboration.

Channeling someone else’s voice in a genuine way, with the natural cadence, tone, and phrasing, is among the job’s hardest tasks, and one that requires lots of face time, “You really want to have that in your head as you write,” Hurwitz said.

From there, Hurwitz would research and prepare a draft to be shared with White House colleagues from various departments — policy, legal, and communications — for input until it was ready to send to Michelle Obama for “a real back and forth” on the final text, “so when she steps up to the podium, those are her words.”

While polish and poetry are always nice to have, the best speechwriting is simply honest.

Those aren’t bad questions, but they’re not the most important. “You have to ask … ‘What is the most deeply true thing I can say at this moment?’ Truth has a way of breaking through, it has a way of reaching people that fake-sounding slogans and soundbites really don’t. Even if they’re clever, even if they’re witty, they don’t have the same weight and import.”

Currently leading an IOP study group at Harvard Kennedy School, Hurwitz hopes to emphasize for students that taking a gamble and falling flat are essential chapters in a political life.

“I want them to understand that success in politics is not about a well-ordered, linear series of successes … Nobody succeeds in politics that way,” she said.

“People succeed in politics by taking risks, having failures, recovering from those failures, working really, really hard, being a good person, helping others and, over the years, collecting a real community of people … who will help you out when you’re struggling, and people you need to help out when they’re struggling,” Hurwitz said.

“Harvard students need to understand it’s OK to fail. That’s really a sign that you’re challenging yourself and growing.”