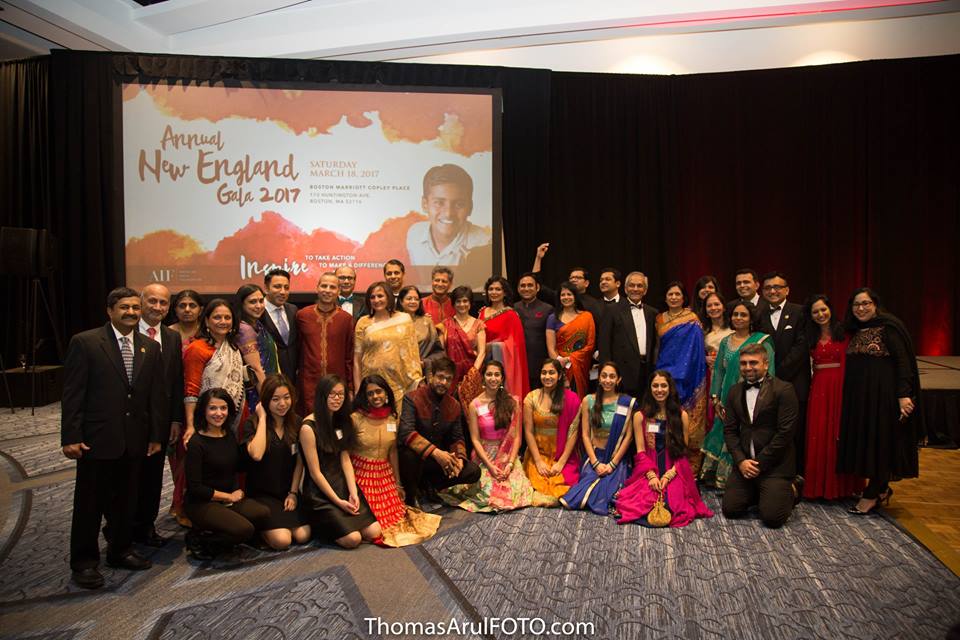 BOSTON– The American India Foundation made history and set a new trend in fundraising for charitable causes in India by attracting 40 percent non-Indians in the mix of attendees at its 11th annual fundraising gala in Boston on Saturday, and raised $800,000. (Photos: Thomas Arul.)

The gala, which was themed “Inspire” and held at Boston Marriott Copley Place in Boston, was attended by 420 people. AIF has impacted the lives of 3.1 million of India’s poor and aims to reach 5 million by 2018-2019. 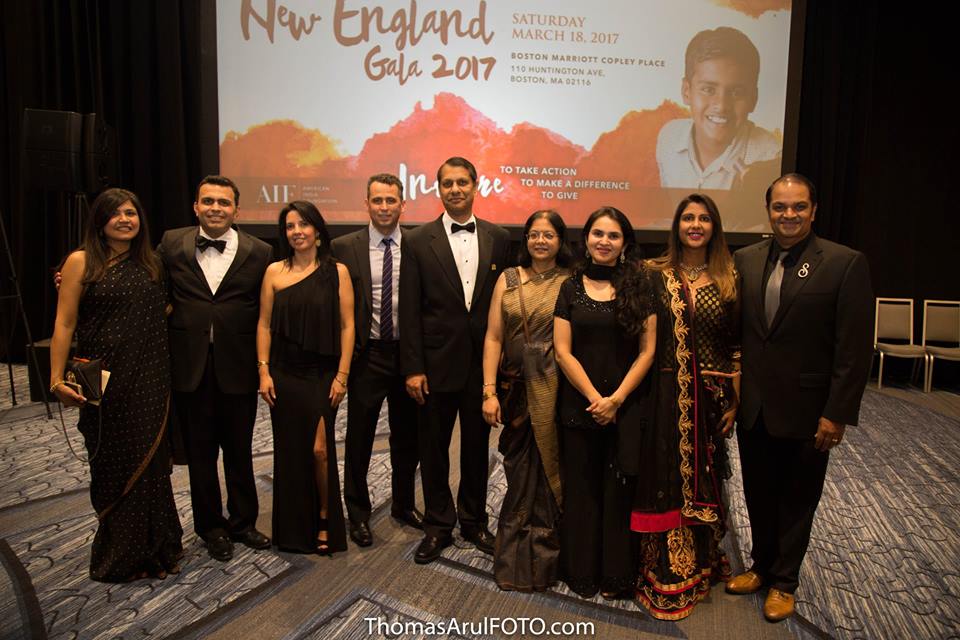 “We had many new faces of donors who were from the younger generation (millennials) and who brought fresh new energy and great ideas,” said Nirmala Garimella, Head of Development for New England region for the American India Foundation, known as AIF. “We had 60% Indian Americans and 40% non-Indians in the mix of attendees.”

Theme this year was “inspire to take action, inspire to make a difference and inspire to give” and based on feedback from attendees people were inspired and energized at the gala, said Andy Gupta, who along with his wife Deepa Acharya Gupta served as co-chair of the fundraising gala.

In their welcome and opening remarks, Guptas inspired the attendees to give joyfully.

“The people in need in India have the same aspirations as each one of us, but do not have the resources to bridge dreams and reality,” said Andy Gupta, urging people to reflect on their own personal journeys and the difference people made to their own path to success.  He said people have the power today to completely transform the lives of people.

Another key aspect of the gala this year was to inspire people to give with the goal of 100 percent participation, Gupta said. “We are tracking this number but anecdotally I believe we increased participation levels significantly.”

“It is very important to give out of inspiration to make a real difference in someone’s life. We are excited to see the strong levels of participation across levels from small to big, which reflected in a substantial total amount raised,” said Deepa Gupta. “The positive energy and enthusiasm in the room was palpable.”

A team of 25 volunteers, including the AIF’s Board of Trustees, Council of Governors and others, worked for six months in order to put together this program. 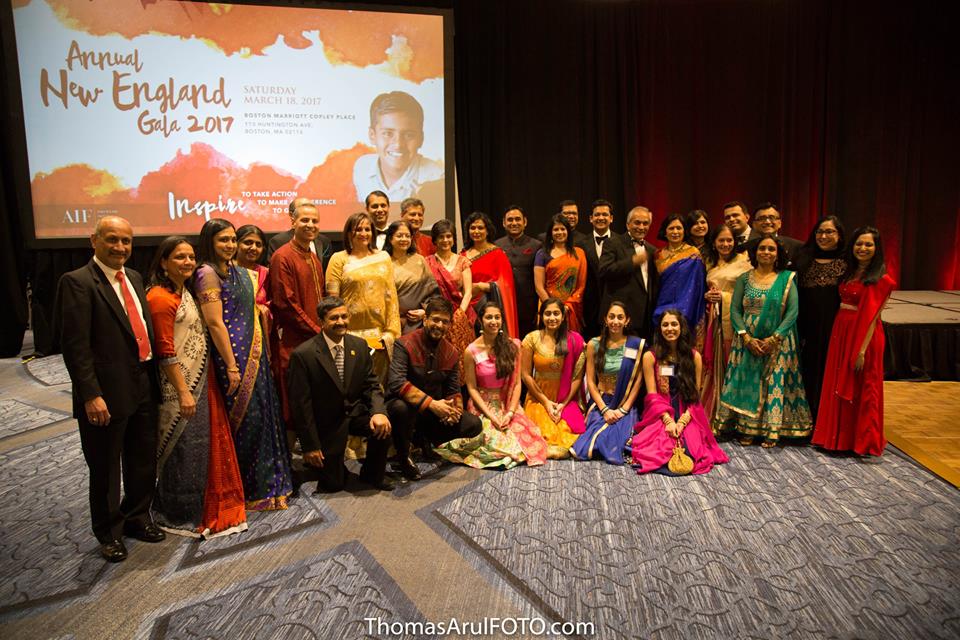 “We pulled off yet another fabulous gala with participation from first generation Indian Americans as well as millenials.  Kudos to our dynamic team led by Andy and Deepa Gupta with support from our Head of Development Nirmala Garimella assisted by Suchitra Krishna,” said Raj Sharma. “AIF has a portfolio approach to causes based on the urgency and scale of need. In the past few years, our MANSI program (reducing infant and child mortality) has proven to be incredibly effective in saving lives and we plan to take it several new states in India. We plan on expanding our ABLE program that helps individuals with disabilities find employment and enjoy a life of dignity and respect.”

Sharma said that AIF is looking to expand its New England Governors Council and invite participation from anyone who is interested in getting involved.

“We had over 25 volunteers working on the gala over the last six months and an additional 10 helping with event management on the evening of the gala,” said Andy Gupta. “The volunteers span several generations, and to see multiple generations come together for a common cause to eradicate poverty in India was quite a sight to see – the energy amongst the team was infectious and I think the positivity, excitement and passion amongst our guests and team played off each other.” 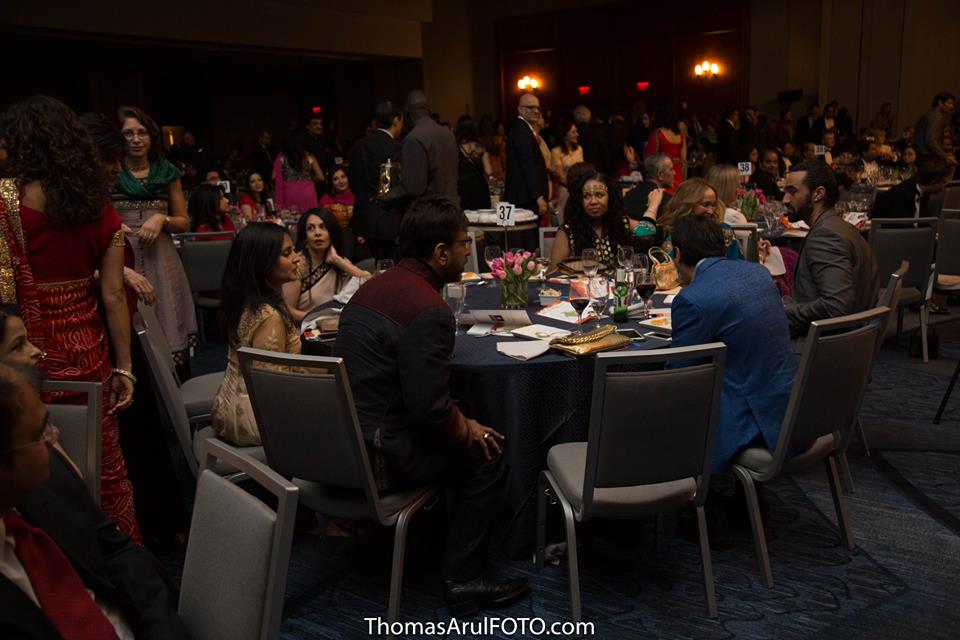 The gala highlights included a live interview with Madhu Bala Sharma, a visually impaired and part of the AIF’s Ability-Based Livelihood Empowerment program, and comedian Anish Shah who served as emcee. Special Guest was  Jaaved Jaaferi , an Indian actor, producer and comedian and a dancer known for his work in several Bollywood films and Indian television shows. Mike Wankum, a staff meteorologist for WCVB-TV Channel 5, conducted the fundraising. There was also dance performance by Nazar.

During the cocktail hours portraits AIF’s longstanding donors were featured on a poster and quoted on why they are engaged with AIF . It was designed by Vandana Sharma. Robots and a Magnet booth during the reception was conceptualized by Vikram Mahidhar.

Rage Frameworks, founded by Venkat Srinivasan, a Boston entrepreneur and philanthropist and long-time AIF supporter, provided a matching $100,000 grant to help in raise for the night bringing the total funds to $800,000.

Alex Counts, president and CEO of AIF, shared his vision of AIF 2.0 with greater emphasis on monitoring and evaluation of its programs in India

The food was provided by Masala Art.

“Food from Masala Art was increbile,” said Andy Gupta. “We had live stations and passed items – and dinner was nice variety of traditional Indian items, including a new dish – Lychee Paneer masala which was delicious. Dessert was a nice mix of jalebi and ras malai – a yummy combination.”

Founded in 2001, AIF is committed to catalyzing social and economic change in India, and building a lasting bridge between the United States and India through high-impact interventions in education, livelihoods, public health, and leadership development. Working closely with local communities, AIF partners with NGOs to develop and test innovative solutions and with governments to create and scale sustainable impact. AIF’s programs emphasize inclusive models that focus on the unique needs of girls and women to achieve gender equity as a basis for sustainable change.

AIF was at the initiative of President Bill Clinton following a suggestion from Indian Prime Minister Vajpayee, AIF has impacted the lives of 3.1 million of India’s poor by providing access to high-quality education, formal sector employment for urban youth and rickshaw drivers, and public health services to protect the health of mothers and their children, while building the next generation of global leaders through service. With offices in New York and California, eleven chapters across the U.S., and India operations centered in New Delhi, AIF is transforming lives across 23 states of India while addressing these issues on a regional, country, and international scale. President Bill Clinton serves as Honorary Chair and former Ambassador to India Frank Wisner chairs the Advisory Council. Learn more at www.AIF.org