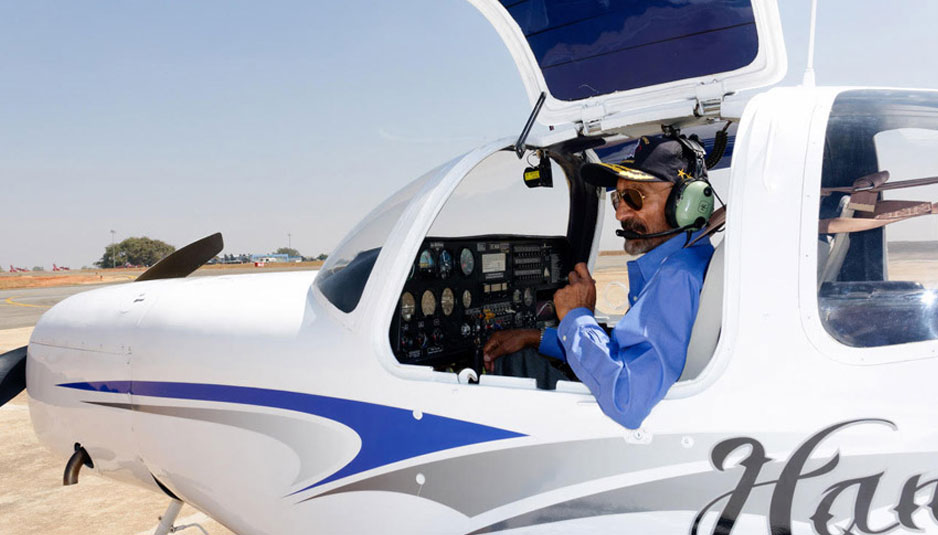 By Anjali Ojha
Bengaluru — “There are old pilots and bold pilots, but no old-bold pilots.” Try telling this to 81-year-old Air Vice Marshal Ajit Lamba (retd) and he’ll laugh in your face. Such is his undying spirit.

“At the moment I am not flying very regularly because of non-availability of aircraft. I have been flying off and on any time I can get hold of an aircraft,” Lamba told IANS on the sidelines of the just-concluded Aero India defence exposition, where he made quite a splash when, dressed in blue overalls, he flew an indigenous Hansa single-engined trainer aircraft, swankily painted in grey and blue.

Having flown in some seven to eight editions of Aero India, Lamba had to keep away from last couple of editions as the Hansa was grounded — and almost didn’t make it this time around too.

“A week before the show, somebody called me up and said I could fly the Hansa during Aero India. I was only too happy to grab the opportunity. It came as a pleasant surprise,” Lamba said.

“Now, at my age, I can only fly these small airplanes, I have been doing that whenever there has been an opportunity. My principle has been, I don’t want to pay for flying to flying clubs. I don’t mind not getting paid,” he said with a wicked smile.

He has not been flying very frequently of late because of non-availability of aircraft, but he once owned his own flying machine — a Pegasus microlight gifted to him by his wife on his 70th birthday. However, he had to sell it off because of lack of parking space.

“I used to fly it regularly. I kept it at the HAL airport in one of the defence hangers. But unfortunately it was getting filled up with their own equipment and one day I was told to vacate. I had to dispose it off because there was no other place in Bangalore. I had to sell it to a colleague of mine,” Lamba rued.

Apart from the Aero India, he has also flown Hansa at the Australia International Airshow in Melbourne.

“Once I took the same Hansa aircraft to Australia to the Melbourne airshow. They were keen to display the aircraft in Australia,” he said.

An inspiration for many, he does get a lot of compliments. But the humble pilot said he felt “embarrassed” most of the time.

“All kinds of people have come and congratulated me. It has been a very humbling experience… As a matter of fact it is quite embarrassing. A large number of people were complimenting, it is a very small thing totally blown out of proportion with the kind of publicity it created, so it became very embarrassing for me,” he said.

About his future plans, he said he would fly as long as he could. For this he keeps his medical status and licence updated.

His fitness routine involves a lot of walking, occasional visits to the gymnasium, golf and squash.

Commissioned in the Indian Air Force (IAF) in 1955, Lamba has flown almost every type of fighter, transport and helicopter that was in service till he retired in 1991.

Asked about his favourite aircraft, he said: “I found the Mirage 2000 as one of the best I have flown. My experience on the Mirage, though, has been limited. I have more hours on the Hunter in the days it flew with the IAF. It was a delightful airplane to fly.”

A recipient of the Vir Chakra for gallantry displayed in the 1965 war with Pakistan, he was stationed in Punjab’s Halwara Air Force Base at the time.

Asked to recount his memories of the war, the veteran said it was too long ago, but added that the idea of putting your life in danger is what was most exciting.

“To participate in action against the enemy… it’s very, very exciting. In the beginning you are probably a bit scared, but after a while, when you get over it, you rate it as the most exciting thing for a flier,” he said.

“Anything which is dangerous is exciting because fun is only when there is some danger to your life. Without that, things won’t be exciting. Why do people do stupid things where there is danger involved? Because that is where they find their thrills,” Lamba mused.