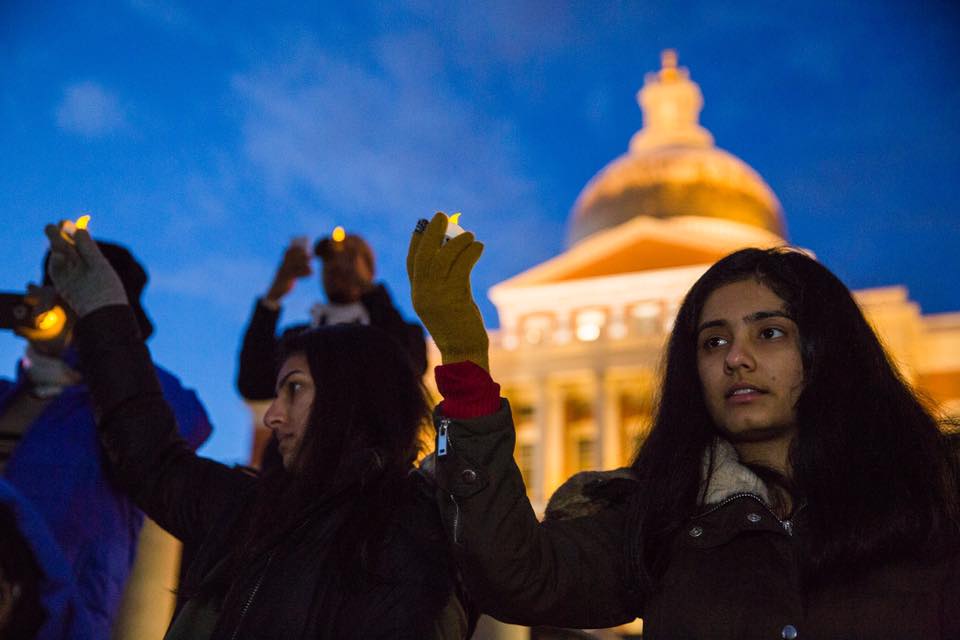 BOSTON, MA​—Approximately 350 members of the Massachusetts Indian American community attended a vigil in memory of Srinivas Kuchibhotla on Friday, March 10th, in the Boston Common. The vigil was the first of its kind in Massachusetts to honor Kuchibhotla and address the recent wave of hate crimes across the country. (Photos: Eric Haynes)

“It is incredible how many people volunteered and participated in this vigil. Among our donations were lights, flowers, money, and notes for the victim and his family,” said Sonali Lappin, organizer of the event and President of the Indian American Forum for Political Education-Massachusetts (IAFPE-MA). “This is a tragedy that transcends religion, ethnicity, political affiliation, or race and one that demands we unite, and stand together in the face of hate.”

The vigil sought to peacefully gather Massachusetts-based Indian Americans to honor the life and memory of Kuchibhotla, who was tragically killed on February 22, 2017 by assailant Adam Purinton who, according to witnesses, shouted anti-immigrant slurs, yelled “Get out of my country”, and later admitted to shooting two men who he thought were Iranian. Three more attacks on Indians and Indian Americans have been recorded within the two weeks since Srinivas was murdered.

The vigil encouraged participants to raise tea lights in silent demonstration of their feelings towards hate crimes and people sang and chanted together to honor Kuchibhotla, his family and other victims of hate-fueled violence.

Many groups came out to declare this a hate crime fueled by the racism and xenophobia that continues to grip the United States. This vigil also sought to denounce hate, violence, and hate fueled violence towards people based on the color of their skin, minority status or their cultural, social or political differences.

“Violence is unacceptable. This vigil helps us to remember the fallen and reminds us not to tolerate any prejudice,” said ​Commissioner Jonjy Ananth, Asian American Commission of the Commonwealth of Massachusetts. 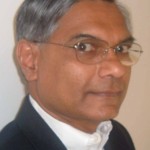 Raj Melville, President of IIT AGNE, said that it was heartening to see the support from a wide cross-section of both South Asia and other community members coming together peacefully to show their support for the family of the victims of the tragedy in Olathe, Kansas.

“The strong, diverse turnout showed that love and hope is universal and will ultimately triumph over hate and hate-filled violence,” said Melville.

Rita Advani, an Indian-American community leader, added:  “I felt it was important for me to show up for the vigil in honor of Srinivas Kuchibhotla to honor his life and what his horrific death represented to our community. We grieve together and stand together against hate. We will continue to do everything we can to ensure that hate does not win.”

Rakashi Chand, Reference Staff at the Massachusetts Historical Society, said that  the vigil was an opportunity for Community to come together to heal, reflect and know that community is stronger together.

Dhruba Sen,​ ​Founder of MetroWest Chapter of SURJ, said that the Indian American community is the most peaceful community in the United States.

Poonam Ahluwalia​, ​Executive Director YouthTrade, said that the 2016 election and its aftermath has seen a growing anti-immigrant sentiment in the country.

“We are becoming unsafe from within.  And that is scary for all of us.  The only pathway forward is to become vigilant and to build solidarity – and this vigil organized by young Sonali Lappin offers an opportunity to mourn and to rebuild,” Ahluwalia said.

​ Leverett Wing, Executive Director of the Commonwealth Seminar, said:  “It was an honor to be part of an event which brings people together and lifts people’s spirits in the face of tragedy. It was heartening to see the best of people on display. This Vigil was a wonderful source of hope and inspiration for anyone who attended.”

​​Ramesh Advani, Executive Director of ENCORE Boston, said that any act of senseless violence is abhorrent and should be denounced.

“The unprovoked killing of an innocent within our country or any hate crime requires all of us to stand together and push for the fullest protection of the laws and our Constitution,” Advani said. “I was heartened by the comments and expressions of those of our Indian American and other communities that came to the vigil for Mr. Kuchibhotla on Friday. It was reassuring to know that decency is still alive and we are united in having our voices heard.”

​ Anu Chitrapu, a community leader who attended the vigil, said: “It was heartening to see so many people at the vigil, who came in spite of the bitter cold on a Friday evening. This signals solidarity and gives me hope that together we can put an end to hate crimes.”

Added Razia Mashkooro of BDC-TV: “It was nice to see Indian community come together to support victims family,” said Razia Mashkoor of BDC-TV. “I from BDC-TV condemned the hate and prejudice against anyone. We should live together with and respect for each other irrespective of race, religion, and ethnic origin. We Indians are a peaceful community living here in America.”